"I must say the house looked sparkling when we got back," M wrote to me after we'd finished a fortnight's house-sitting at their place. "Did you do some cleaning? Or maybe I left it like that, did I?"

It was a rhetorical question, but I had a feeling the right response would have been: "Yes, you left it like that." (As the Prime Minister says, miracles do happen.) "And heavens, I'd never presume to spring-clean somebody else's house." 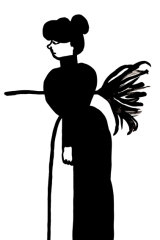 I thought about how I’d feel if the positions were reversed.Credit:Christina Zimpel

In truth, I'd had a good old clean and tidy while they were away, not just a quick vac and neaten up before we left. I couldn't help it. I'm always tidier in other people's houses than in my own, plus I had time, I wanted to do something useful for them and for years I'd been itching to get my hands on a few eyesores like the gravy streaks on the cupboard doors. As far as I could tell, the same ones had been there for years. It was like M and T didn't realise you could actually clean surfaces.

Their house is charming (but M and T aren't known for their housekeeping). M has a bluestocking's disdain for fussing about with a duster and mop like Mrs Doubtfire. She's also very shortsighted, a minor disability which can absolve you of all sorts of cleaning sins. I've come to realise poor eyesight is why elderly people's houses are often so dirty. It's not that they don't care about the grime. They can't see it.

For his part, T affects an attitude of not caring, because if he didn't, he'd have to do housework. Together, they make Will and I look gold standard. For example, while a visitor to our place might find a few crumbs in the cutlery drawer, they wouldn't find whole chunks of ancient cheese lurking there, or corners of burnt toast and some green and furry things that may once been orange peel or carrot scrapings. Likewise, that visitor would be able to remove a towel from the cupboard without all the other towels tumbling out in a great big terry-tangle.

But was it wrong of me to take matters into my own hands, however good my intentions? As I scrubbed the bath one day or tackled the layers of dust on a mirror another, the satisfying sense of my own virtue warred with a creeping suspicion I was overstepping the mark. Would my cleaning and re-ordering would be appreciated, or seen as a bloody cheek? Would my friends feel judged?

Was I making nice, or making a point?

And finally, what was the use of doing it, if that was how they liked things? Was I making nice, or making a point? Because, barring a Damascene conversion for M and T on the road to good housekeeping, it wouldn't be long before it all reverted back to the way it was. It was their house, after all.

I thought about how I'd feel if the positions were reversed (not that I'd get M and T in to do a surprise clean). Actually, I decided, I'd [ital] love [ital] it if a house guest came in and introduced order and discipline in my absence. If they cleaned or tidied things I hadn't noticed or hadn't known how to do properly; ie. quite a lot of things. Yes, I would feel a bit judged and shamed but not that much. I'd feel helped. I'd be big enough to see some people are way better at this stuff than I am and recognise it as their way of saying thank you. Or would I?

This isn't quite the same deal but once when I was about 10, a friend came for a sleep-over. I usually stayed at her house, which was always astonishingly neat and orderly, something of a foreign state of affairs at our house. All the beds were made each morning (a bride doll with a glassy stare arranged on her immaculate bedspread) and in the evenings, the whole family ate at the dinner table, saying grace, politely asking each other to pass things, praising the meal instead of whingeing. They were like a TV family.

Then she came to my place. For some reason, there was an old sink in my bedroom and a rust stain ran down the back of it. "Eeew, this sink is so dirty. How can you stand it?" my friend said. I was mortified. How had I never noticed? How had I never cared? Later, I told my mother about the remark. She had her feet up and was reading a book. "Rude," she said, peering at me over the pages. "Anyway, it's just a sink. Tell her to get over it." That made me feel better, although I still got out the Ajax.

As I said, I needn't have worried in this recent case. M didn't notice she'd left Slacker's Castle and walked back into Home Beautiful two weeks later. And if she did, she was happy to claim my hours of quiet industry as her own. It hasn't made the slightest difference. I visited recently and saw there are new gravy stains. Phew.