Each week, Benjamin Law asks public figures to discuss the subjects we’re told to keep private by getting them to roll a die. The numbers they land on are the topics they’re given. This week, he talks to Ridley Scott. The British director, 84, is best known for blockbusters such as Alien, Blade Runner, Thelma & Louise, Gladiator and Black Hawk Down. Knighted in 2003, his latest film is House of Gucci. 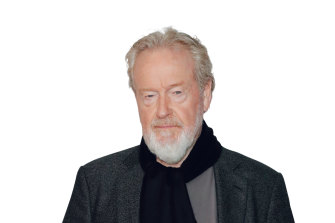 Ridley Scott: “Make sure you’re doing something you’re passionate about because you’re going to get bored along the way if you’re not.”Credit:Getty Images

House of Gucci is about Patrizia Reggiani, who had her former husband, the fashion heir Maurizio Gucci, assassinated in 1995. What did you want to say about power and money with the film? It’s obvious that wealth doesn’t make a rich man richer: it just makes him busier. The more wealth you’ve got, the more problems you’ve got. Therefore, it’s no rest for the wicked.

How much money did you earn for making House of Gucci? That’s a cheeky question, so I’m not answering it. But you earn your rights and position according to your success. So I’m paid for my judgment, and for that I’m quite well paid. But I drive a Toyota Prius. I could drive a Roller, but I don’t because I want to save the world and I’m not stupid. I got rid of all my fancy cars 10 years ago, and I’ve been driving a Prius ever since.

Box office is one metric of success. What are your metrics? I was once killed over Blade Runner by a famous journalist called Pauline Kael in The New Yorker magazine. I was offended, actually, by the article. But what I did was I framed it. It still hangs in my office as a reminder: never read critiques of your own work. What’s important is that you walk away from what you’ve done, know what you’ve done, and have an opinion about what you do. I don’t read even good critiques.

What would you be doing if not directing movies? I can’t conceive what Plan B would be because I think I’m the luckiest man in the world.

You’ve previously stated that you’re an atheist. Has that always been the case? I’d say I’m agnostic now. I don’t think there’s an old geezer in flowing white robes standing on a cloud at the pearly gates. It makes more sense to ask the question, “Have we been pre-visited?” The guy who summarised this so well was [director] Stanley Kubrick in 2001: A Space Odyssey [1968]. One morning, a black obelisk appears in front of a waterhole. An ape sleeping by the waterfall, who was fighting for food the night before, crawls towards it. It touches the obelisk, and from that, you cut to seeing the ape the next afternoon. The ape has made a weapon out of a stone, killed an animal for food, taken the hip bone and used that as a weapon, too. Then you’ve got the best cut in cinema history: the ape throws the hip bone into the air and Kubrik transforms it into an orbital satellite. [Critics have pointed out that each appearance of the monolith in the film appears to trigger an epic jump in the evolution of mankind.]

To clarify, do you believe something like that happened and pre-contact with aliens has been made? Or that alien contact will be made in the future? Never say never. I had interesting conversations with NASA when I was doing The Martian in 2015. They said we could only conceive of speed as matter flying through space at limited velocity. But when you’re travelling at the speed of light, you’ve got to think in another way. I said, “You’re talking about demolecularisation and remolecularisation?” They said, “Precisely.” I said, “By God, that’s basically Captain Kirk in Star Trek: ‘Beam me up, Scotty.’ ” They said, “You got it.” So never say never. We don’t know.

What are your commandments as a filmmaker? Make sure you’re doing something you’re passionate about because you’re going to get bored along the way if you’re not. Don’t take a job just for the money.

What’s your favourite death scene in cinema? The best death scene I’ve ever seen is in Terms of Endearment [made in 1983, directed by James L. Brooks]. I’ve always thought, “My god, the moment where Shirley MacLaine loses her daughter [Debra Winger] is spectacular.”

What about in your own work? What’s the secret to directing a good death scene? Oh yeah, Gladiator’s death scene is pretty f—ing good. I knew Russell Crowe was gonna die [following a duel with Joaquin Phoenix’s Commodus in the Colosseum]. So we’re sitting in the desert one day, trying to have lunch in this f—ing crazy heat, on a series of rocks that are like tennis balls. You can’t walk on them: you gotta get in the Jeep and drive over them, your teeth jangling. Russell was being grumpy. I’m sitting near him – we’re hot as hell – and I was thinking, “How are we going to show this?” Then I got it. We made a little platform with the lowest rig possible, so his head was lying on this platform with little wheels like skates underneath it, and we ran this platform over the ground, just grazing the pebbles. And here’s the trick: I put the camera onto the platform and said, “Just lie there. Relax, close your eyes, you’re gone.” We pushed the platform slowly forward. And I got 20 seconds of f—ing magic.

You’re now in your 80s. Is death on your mind more often as a result? I never think about it. The trick is to stay busy. I mean, I creak a bit when I stand, but I try to do yoga. I did years and years of tennis. I love tennis, but it’s now ruined my left knee, more’s the pity. But I had 40 years of great tennis. But my feeling is no, I don’t give it a thought – ever.

What big project do you want to do before you die? A musical. I love Cabaret. I love All That Jazz. And Gene Kelly in Singing in the Rain …

To read more from Good Weekend magazine, visit our page at The Sydney Morning Herald, The Age and Brisbane Times.

The best of Good Weekend delivered to your inbox every Saturday morning. Sign up here.