The federal government will rely on mammoth spending on new energy projects to cut greenhouse gas emissions to net zero levels by 2050 in a climate policy to be released as soon as Tuesday after a deal with the Nationals to endorse the target.

The policy will come with updated projections that show Australia will surpass its stated goal of reducing emissions by 26 to 28 per cent by 2030, factoring in the new measures to claim the cuts could reach as much as 36 per cent. 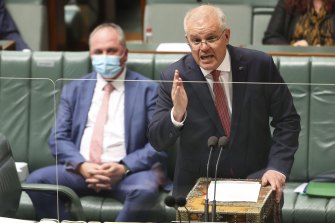 Prime Minister Scott Morrison is expected to outline the changes alongside Energy Minister Angus Taylor along with policies on fuel standards, electric vehicles, the use of hydrogen as a “clean” fuel and more spending of taxpayer funds on energy projects.

Labor leader Anthony Albanese called on Mr Morrison to reveal the plan after telling Parliament on Monday he welcomed the government’s move to adopt the 2050 target Labor had taken to the last federal election.

Mr Morrison told question time the government would “exceed expectations” on the 2030 target it took to the last election, ahead of a federal cabinet decision on Monday night that was expected to sign off on the energy policy.

“It is performance that counts, not empty aspirations, and what Australia can point to is a track record of delivering a 20 per cent reduction in emissions at the same time as Australia has achieved 40 per cent increase in the size of our economy.”

When Mr Morrison spoke of the government’s plan to cut emissions, Mr Albanese asked him to produce the document and the Prime Minister replied that it would be revealed “soon enough” and the government would be “absolutely transparent” about the details and modelling.

Mr Albanese dismissed that as a “joke” in a series of interjections about the long wait for the government to produce the policy while it negotiated with the Nationals.

“You’ve been in government for nine years,” the Labor leader said across the House of Representatives.

Nationals leader and Deputy Prime Minister Barnaby Joyce secured an immediate win for his party in return for its support for the net zero goal, with Resources Minister Keith Pitt returning to federal cabinet on Monday. 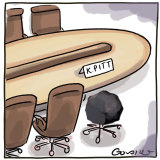 A key aim in the appointment is for the Nationals to have a senior minister who is across the detail of the climate policy to make sure the party secures the safeguards it is being promised to prevent climate measures hurting regional communities.

The Nationals are confident of gaining changes to the Environment Protection and Biodiversity Conservation to ease what they see as “green tape” on farmers and miners, sparking a likely fight in Parliament over the scale of the changes when Labor and the Greens want stronger checks on new projects.

More infrastructure spending will also be part of the final package, including support for an extension of the inland rail project being built from Melbourne to Brisbane.

But the concessions to the Nationals are expected to take time to be delivered and some will not be confirmed until the mid-year budget update in December, the federal budget next year and possibly the federal election campaign.

Mr Pitt first rose to cabinet when one of Mr Joyce’s closest colleagues, Matt Canavan, quit the frontbench out of frustration with former leader Michael McCormack. He was dumped from cabinet when Mr Joyce returned to the Nationals’ leadership in June and promoted one of his supporters, Andrew Gee, to the senior rank.

While the move gives the Nationals an additional seat in the inner circle of government, Liberal MPs appeared to accept the outcome as the “cost of doing business” when the important goal was government unity and a settlement on climate policy.

With both major parties promising a net zero target for 2050, the political debate in Parliament centred on Mr Morrison’s claim to exceed the government’s 2030 target while Labor is yet to decide whether it will set a new goal for that year.

Mr Taylor said the new measures would reflect his approach of using “technology not taxes” to reduce emissions, but the policy package is expected to include substantial spending of taxpayer funds, incurring debt when the government is forecasting budget deficits to continue beyond 2030.

Get daily updates on the climate summit that will shape our future. Sign up to our COP26 newsletter here.