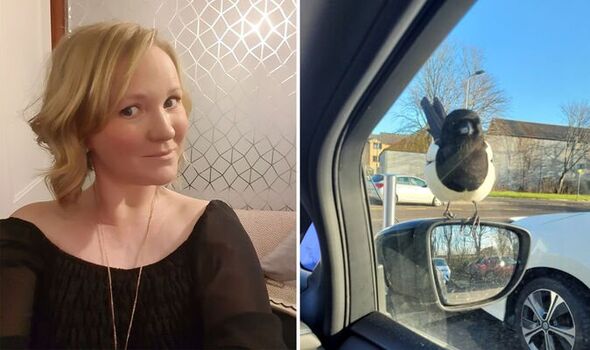 Amanda Doyle, 36, was picking up her son from nursery when the bird swooped in. The mother-of-two describes the bird “grabbing her head like a hat”.

The “evil” bird then started pecking her head, which caused it to bleed.

Luckily, her son Ronan managed to escape any injuries, but the unlucky victim said it did look like the bird would also try to attack the three-year-old.

Amanda and her son were rescued by a stranger who was able to swat the bird away.

Mrs Doule was left traumatised by the experience and fears she may be left with an infection.

She was due to set off on her honeymoon to Cyprus on Wednesday but claims the trip has now been ruined.

Mrs Doyle also said her “sore” injuries have left her “scared to go outside”.

She said: “It looked so evil, the fear was so bad I couldn’t move. I am scared to go outside if I’m honest.

“It bounced off my back, then my face around 10 times, then it grabbed my head before flying away.

“It came back and circled my son, then came for me again.”

She then went on to detail how a heroic stranger came to her aid.

She said: “A man hit it but then it came back and got in my head really bad.

“I am scared it will remember me, I’m going on my honeymoon tomorrow to Cyprus but I am so sore and upset.’

She added: “The hospital went well, I was seen within two hours. I had to get a tetanus jag and a deep clean.

“The cut is not massive. But I’m so scared because if the stranger didn’t step in it would have been worse.”

Mrs Doyle has warned others to stay away from the area or to be on alert if they are nearby.

She posted on social media: “Be careful around Bellshill on way to Bumblebee Nursey, and got attacked but a magpie, at lights at corner.”

However, several others claim Amanda was not the first victim of the bird which has allegedly been terrorising a town in Scotland.

One person said: “Really hope you are ok! That’s so scary.

“I was trapped in my car last week as one chased me, it kept pecking the window and windscreen, this is very worrying knowing they are attacking.”

While a second said: “Me and my boy were attacked last week and this morning.”

A third person replied: “Tried to attack my daughter last week too.”