She will report her findings by November 25. 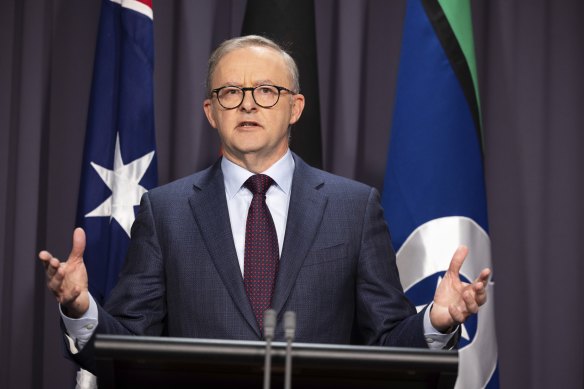 Prime Minister Anthony Albanese said he would “find it extraordinary if anyone refused to talk to a former High Court judge”.Credit:Alex Ellinghausen

Albanese said the terms of reference had been agreed by the cabinet.

“It’s very clear when we received the advice from the solicitor-general, who said, to quote, “the principles of responsible government are fundamentally undermined by the actions of the former government”, that we need to have a quick and appropriate inquiry which is not about the politics but about how this happened, why it happened, who knew about it,” he said.

“We need to have transparency in the process because our system of parliamentary democracy relies upon conventions, relies upon the Westminster system of checks and balances.”

Albanese said the inquiry would examine the implications of Morrison’s secret appointments for “the functioning of departments, government business enterprises and statutory bodies, and for accountability and public confidence in our system of government”.

“The terms of reference also require the inquiry to examine and report on practices and processes applying to ministerial appointments, including the public disclosure of these appointments. The inquiry will make recommendations to the government on any changes which could provide greater transparency and accountability to ensure that this can never happen again, and to ensure that we have a system of government in this country that is transparent, where there are checks and balances, and where there is accountability,” he said.

Asked whether the inquiry would have the power to compel Morrison to give evidence, Albanese said he would “find it extraordinary if anyone refused to talk to a former High Court judge”.

“There will be the opportunity for public submissions and Virginia Bell will ask to speak to people who were involved or who had knowledge at the time. We chose not to go down the road of a royal commission. We think this gets the balance right. But I would find it extraordinary if anyone refused to talk to a former High Court judge who is, I think, beyond reproach,” he said.

Albanese said members of the public service would be required to give evidence, but added “I don’t think it will require compulsion”.

“But if it was the case that Virginia Bell felt like she was not getting the co-operation that was required, then I’m certain that other measures could be considered.”