Olympian Quanesha Burks has been waiting for this moment since she was in high school. The 26-year-old Alabama native is heading to the Olympics in Tokyo, where she’ll compete in long jump.

“I feel like I’m just on a cloud right now still, because so much has happened since the [Olympic] trials,” she told CBS News in an interview from Louisiana on Wednesday. “But I’m so excited to just represent our country, and just really put on a show on a big stage.” 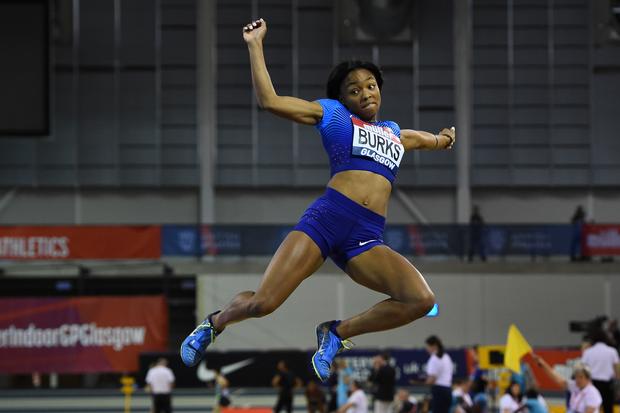 Burks qualified for the Games after placing third in the Olympic trials in Eugene, Oregon, which she called an intense “pre-Olympics” competition. She was undaunted by the moment, in part, because of all the preparation – and in part, because her track toward greatness wasn’t easy.

“I’m excited to really go out there and just showcase my talent and knowing that this is my time now,” she said. “And I know I belong here, I worked hard to get here.”

Burks and her two sisters, ages 11 and 13, were raised by her grandparents and she worked to help her family while she was in high school. A typical day then would look like: Driving her “Grammy” to work at 4:30 a.m., return home to get her younger sisters ready for school, drop them off, go to class herself, attend track or basketball practice, work her 4 p.m. to 10 p.m. shift at McDonald’s and finish her homework whenever she got home.

Whenever she didn’t have a track meet or a basketball tournament on weekends, she would work at the fast food chain early in the mornings. After making Team USA, Burks triumphantly made her path to the Olympics known.

Burks earned $200 every two weeks at McDonald’s as well as life skills, but she said it was “more than a job” for her.

“It was to help my family in all financial standpoints,” she said. “And that’s what my purpose was, like it’s always been bigger than me.”

Burks originally didn’t want to try long jump, but after her high school coach convinced her to try it, she never looked back. And after learning the sport could also be her ticket to college, Burks was even more motivated since she’d be the first one in her family to attend.

“My family’s proud of me for graduating high school, but I wanted more,” she said. “And I have two little sisters that are looking up to me. So, track and field was an opportunity for me.”

According to her Olympian bio page, she was an 11-time high school track and field state champion. She eventually earned a full ride to the University of Alabama and she got her degree.

While she continued to work toward her Olympic dreams, she credits her grandparents for supporting her. Her grandfather, Fred Williams, died in 2019 just before USA trials.

“Grandad would keep me humble, but he would brag about me to so many people,” she said. “After his passing, I received so many messages… [his manager] reached out to me and she’s just like, ‘Hey, you don’t know me, but you’re great. I loved him. He always bragged about you. Every time.'”

The death hit Burks hard, but she knows he’ll be there with in Tokyo.

“My grandad is still gonna be there in spirit,” she said. “And it’s like you have a first class ticket right there with me.”

Earlier this year, Burks was battling a bone spur injury that cast doubt on her Olympic dreams. However, her mental fortitude remained and continued to “speak it into existence” – believing she could achieve her goal.

“Never let other people dictate your success or how far you can go in life. If you believe yourself, you have confidence in yourself, you can go far,” she said. “So, I just started speaking it, ‘I’m going to be an Olympian.'”

Not only is Burks an Olympian, she is also hoping to win a medal in Tokyo.

“All I need is opportunity,” she said. “If I have an opportunity, I’m going to capitalize on it.”