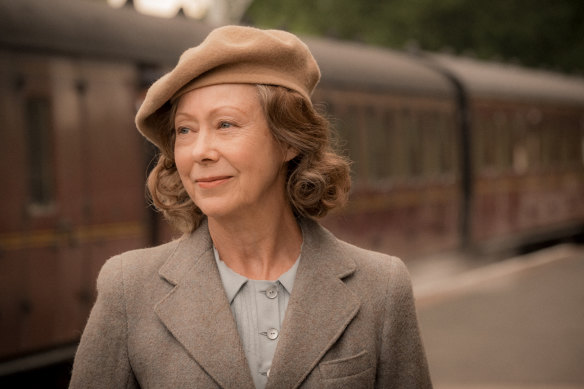 Mention Jenny Agutter to any man of a certain age and watch him go misty-eyed remembering Nic Roeg’s 1971 film Walkabout. Agutter played an English teenager – simply called Girl – lost in the Australian desert with her younger brother and rescued by a young David Gulpilil. She seems to have been the first crush for so many boys who saw that film that it feels unseemly to mention it now. Even though, at 69, Agutter is still pretty, radiant, charming and keen to talk about almost anything. We start off talking about glaciers, remote Scottish islands and the way Harris tweeds reflect the earthy colours of the local landscape. It’s the kind of thing that gives publicists nightmares.

Agutter was already a child star when she made Walkabout and says she can still watch it “over and over”. “I’ve been places in Australia where people have never been,” she says fondly. “For three months we were travelling through the outback. It was extraordinary, before Darwin had the big hurricane and was destroyed – it was very different – and just working with David. Who passed.” She pauses for a respectful moment. “It’s a film I can look at over and over – it is lovely to have been part of it and looks extraordinary – but also the story it tells I now see as a very dark story about humanity.”

It was a relief then to make The Railway Children, which was filmed after Walkabout but came out a year earlier, starring Agutter as Bobbie, the eldest of the children. “Because that was an uplifting story, about the redemption you can have, letting the childish side come out”. Little wonder she’s been happy to return to the story twice – in a TV adaptation in 2000 and now in The Railway Children Return.

Agutter first played Bobbie in a 1968 television adaptation of Edith Nesbit’s novel, which was first published in serial form in 1905. The children of the title move with their mother – who, like Nesbit, writes stories for a living – from their townhouse with servants to a much smaller house by a country railway station when their father, a senior civil servant, is wrongly charged with selling state secrets. 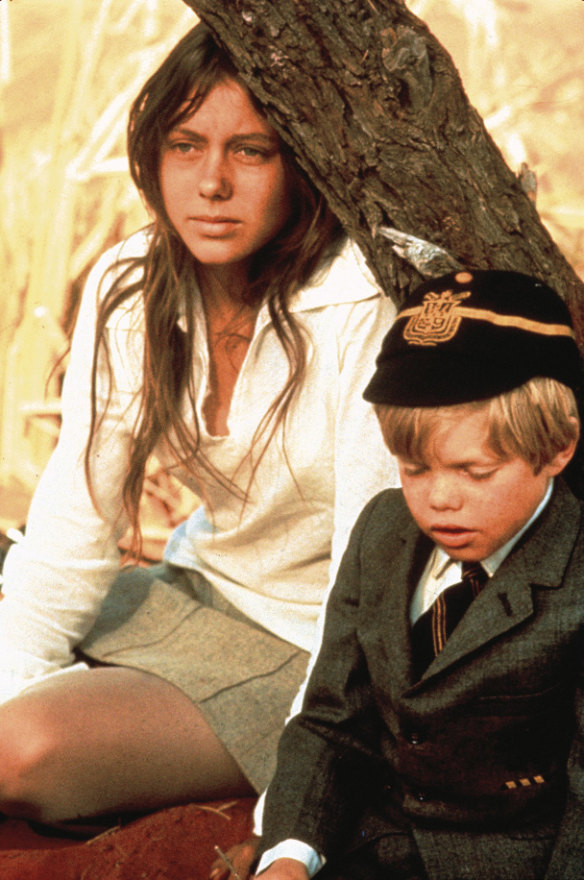 Jenny Agutter and Lucien John Roeg in the 1971 movie Walkabout.

The overarching story is the need to prove his innocence, but the children also help to avert a train derailment, rescue a boy who has broken his leg in a tunnel and have many other railway-related adventures along the way. The 1970 film version, directed by Lionel Jeffries, is still regarded as an almost perfect literary adaptation.

Agutter went on to make a good many more movies and television series, ranging from filmed Shakespeare to The Two Ronnies and Call the Midwife on TV, but never with the singular impact she made as what were essentially coming-of-age characters. She does, however, have the distinction of having played three generations of The Railway Children family. In 2000 she played the poetic, liberal Mother in a television adaptation. And now here she is in The Railway Children Return, playing a very sparky grandmother.

This thoroughly delightful sequel takes the bare bones of Nesbit’s plot – a family of city children goes to live near a railway station in Yorkshire – and sets it during the Second World War, when thousands of London children were sent to live with families in the country while the city was being bombed. Three siblings desperate not to be separated – too many for most families to accommodate – end up with the school headmistress (Sheridan Smith), and her mother, who are organising evacuees in their village and hadn’t intended to take any children themselves.

Grandmother is quite a character. She has fond memories of creating havoc as a suffragette. She also remembers stopping the train from crashing by waving her petticoat as a warning signal and standing in front of the engine as it approached. Because, of course, she is Bobbie, the original railway child and the character Agutter played more than 50 years ago. They have aged together.

The performance challenge for Agutter was to decide how much Bobbie would still be the person she was at 12. “I think one’s got to look at that life and see how it might affect someone,” she says. “It’s quite interesting, isn’t it, to think how much someone is who they are as a child and how much they change.”

She was conscious that her various Railway Children roles marked out changes in her own life. She had gone to Hollywood soon after she made the 1970 film version; 30 years later, she returned to Britain to play Bobbie’s mother. “And now I’m playing a grandmother, which is also part of my life. So my life has changed while, in story terms, the world has changed.”

Like Nesbit, the Edwardian Bobbie believed that human effort would make the world a better, fairer place. By the 1930s, with Fascism gaining a grip across Europe, it was hard to hold on to that faith. That surely makes The Railway Children, in all its versions, feel uncannily relevant.

“I think you’re right,” says Agutter. “What is so odd about today is that we have every possibility of making it good, but we’re still messing it up… There are a lot of fights on and people need to take them on, hopefully in a spirit of adventure. Not to feel the weight of it all the time. Otherwise you can’t do it.” 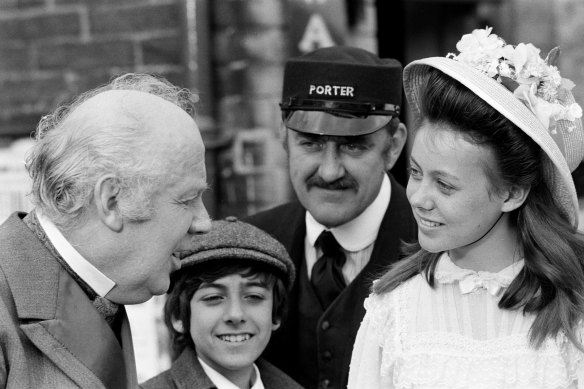 Jenny Agutter on the set of The Railway Children in 1970.Credit:Getty

The core plot of The Railway Children Return involves the children’s discovery of a young runaway soldier; Abe (KJ Aikens) is an African-American who enlisted underage and is now on the run from the US military police. It isn’t the war he can’t take, but racism within the army, which at the time was legally segregated. For the children, his skin colour is meaningless, but they know a good cause when they see one.

The child actors, says Agutter, treated the filmmaking as play. “They’re not professional actors. What they used were their childish imaginations to make the scenes come alive and be real. They knew there was certain dialogue they had to say, but they could improvise on top of that. They could go anywhere they wanted. And that was lovely to work with. It was like: ‘where have you gone now?’ Which felt lovely.”

She was only on set for a week, but she seems very present in the film. “I think it’s not so much me present as the history being present,” she says. “And I think that’s what makes it work, because what Bobbie brings with her is that other world … you are constantly remembering it when you’re looking at the place, at Howarth and the train and the countryside. And the children are fighting something different, yet they still go about it as though it’s an adventure.” As everything should be, of course.