The subject came up as Garcelle talked about being the first Black housewife of the show.

During the “Real Housewives of Beverly Hills” reunion on Wednesday night, Garcelle Beauvais shared her experience as the show’s first Black star, 10 seasons in.

Andy Cohen noted it must be a “complicated” time for Erika Jayne, whose son Tommy is a cop in California in a moment where protests against police brutality and racially motivated injustices against the Black community continue across the nation. 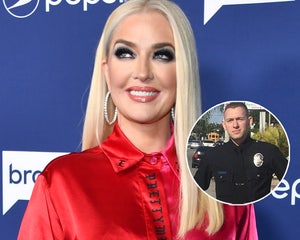 “I get to see the best of law enforcement through the work of my son,” Erika explained. “But there are institutional and individual tragedies that are continuing to happen in the Black community and those need to change.”

Garcelle said she “actually reached out to Erika to check on her son,” amid the protests — as Jayne clarified that Beauvais was “the first person that did.”

The subject came up after Andy asked Garcelle what it was like being the first Black housewife of the BH franchise.

“It’s always cool to be the first anything, right?” said Beauvais. “I felt pressure in people wanting me to come in and just snap at everybody. We’re labeled angry women a lot, Black women, because we’re outspoken, we’re strong — and sometimes I hate that word strong because I feel like people negate my pain, just because I’m strong doesn’t mean I don’t have pain and I don’t feel.”

Garcelle previously said she believed some of the other women in the cast were afraid to be as candid with her out of fear “Black social media” would come for them. When Cohen asked her about those comments, Beauvais said “race is such a fine line to deal with, so if they said anything they would have said to another white woman but because it’s me, it becomes a racial thing. I get it.”

“If I was in their shoes, I would be nervous too,” she added, with Kyle Richards saying she “never felt like that.” It was a comment Garcelle appreciated.

Beauvais went on to talk about the conversations she’s been having with her children, some of whom have a white father, about the Black Lives Matter movement.

“We’ve always had racial conversations about being careful with the police, being respectful and just the injustice we encounter just because of the color of our skin,” she said.

She said that while it’s been a long time coming — and took both a pandemic and the George Floyd video to make it happen — she said she feels “hopeful” change is coming.

“I want my friends to call me and tell me, ‘Is it okay if I say this?'” she added. “It’s okay to have those comfortable conversations.”

“The Real Housewives of Beverly Hills” reunion continues next Wednesday on Bravo.