The board overseeing a mountain park near Atlanta that has a giant carving of Confederate leaders voted Monday to relocate Confederate flags from a busy walking trail and create a museum exhibit that acknowledges the site’s connection to the Ku Klux Klan. But the board didn’t address the carving.

The moves it did make were part of an effort by the Stone Mountain Memorial Association to address criticism of the park’s Confederate legacy and shore up its finances. The chairman of the association’s board promised more changes.

“We’ve just taken our first step today to where we need to go,” the Rev. Abraham Mosley said at a news conference after the vote. Mosley, appointed by Gov. Brian Kemp last month, is the board’s first African American chairman.

Mosley didn’t rule out future changes to the carving.

Critics have called on the board to remove the colossal sculpture of Gen. Robert E. Lee, Confederate President Jefferson Davis and Gen. Thomas J. “Stonewall” Jackson from the mountain’s northern face. Completed in 1972, it measures 190 feet across and 90 feet tall. It’s the largest Confederate monument ever crafted and has special protection enshrined in Georgia law. 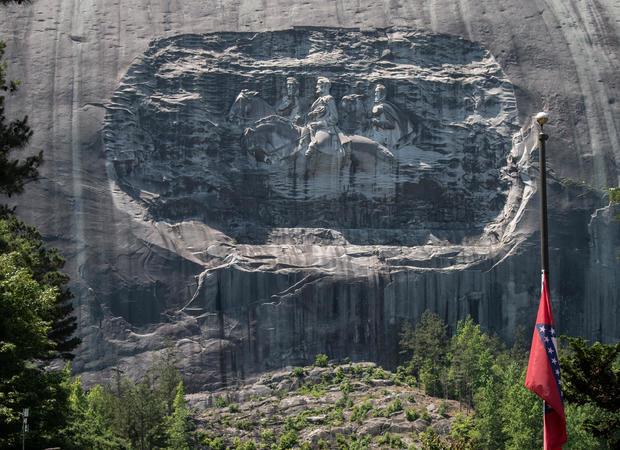 The changes approved Monday come amid a national reckoning on race that brought down dozens of Confederate monuments last year. Many of the Confederate monuments that are now controversial were erected in the early 1900s by groups composed of women and veterans. Some honor generals or soldiers; others bear inscriptions that critics say wrongly gloss over slavery as a reason for the Civil War or portray the Confederate cause as noble.

Work on the Stone Mountain sculpture languished until the state bought the mountain and surrounding land in 1958 for a public park. Finishing the monument gained renewed urgency amid resistance from Georgia and other Southern states to the civil rights movement and efforts to end segregation.

Today, the park 15 miles northeast of downtown Atlanta markets itself as a family theme park rather than a monument to the Confederacy. It attracts large numbers of tourists and other visitors interested in hiking to the top of the mountain or walking the grounds. Still, it is replete with Confederate imagery.

Former DeKalb County NAACP President John Evans told the Stone Mountain board before the vote that they needed to do more.

“We need to take down the flags. We need to change all the street names and do what we said we were going to do: eliminate the Confederacy from Stone Mountain Park,” he said.

“This is absolutely nothing,” said Rose. “They don’t want to deal with the real issue that this Stone Mountain carving represents denigration of Black folk, segregation, racism, racial oppression. This is what this represents,” he said adding the the resolutions “skirt around the issue.”

A member of the Sons of Confederate Veterans who spoke at Monday’s meeting said maintaining the carving at Stone Mountain is not racist but a way to honor the soldiers who fought for the Confederacy. Eric Cleveland said he didn’t have a big problem with the changes the board approved, calling them a “compromise,” but he said they would embolden critics.

“These people will not stop until our history is completely erased,” he said.

Grady Vickery, am officer with the Sons of Confederate Veterans Mechanized Calvary spoke in opposition to forthcoming changes, reported.

“I am a Confederate American and I am an American Patriot,” Vickery told the group. I have sworn and oath that I would sacrifice my life if necessary to defend it.”

The museum exhibit approved by the board will relate the history of the carving, including its roots in efforts to maintain segregation, said Bill Stephens, Stone Mountain Memorial Association’s CEO. It will also reflect the site’s role in the rebirth of the Ku Klux Klan. The group marked its comeback with a cross burning atop the mountain on Thanksgiving night 1915.

The board also voted to change the park’s logo, which currently features the Confederate carving, and seek federal recognition of a bridge built by a prominent African American.