Not all bad! Greg Grippo reflected on a happy memory from Katie Thurston’s season of The Bachelorette after the pair’s dramatic and controversial split.

Katie and Greg’s Split: Everything We Know

The reality star, 28, did an Instagram Story Q&A with fans on Thursday, September 2, with one person asking about his “favorite unaired moment” from season 17. Alongside a photo of himself with fellow contestants Andrew Spencer and Justin Glaze, he recounted an incident with Hunter Montgomery that he found hilarious.

“First day in the house Andrew and I couldn’t stop laughing,” Grippo explained. “Hunter messed up someone’s name and the name was so far out of left field. Like Trent or something (there was no Trent). Idk why it was so funny but it was. Every time Andrew and I looked at each other we couldn’t stop laughing. I had tears coming down my face every time he tried to get a word out.”

6 Things to Know About Greg Grippo

The marketing sales representative was a front-runner on Thurston’s season until the two had a nasty fight after his hometown date over her response to him saying “I love you.” He subsequently quit the show, and she got engaged to Blake Moynes during the August finale. 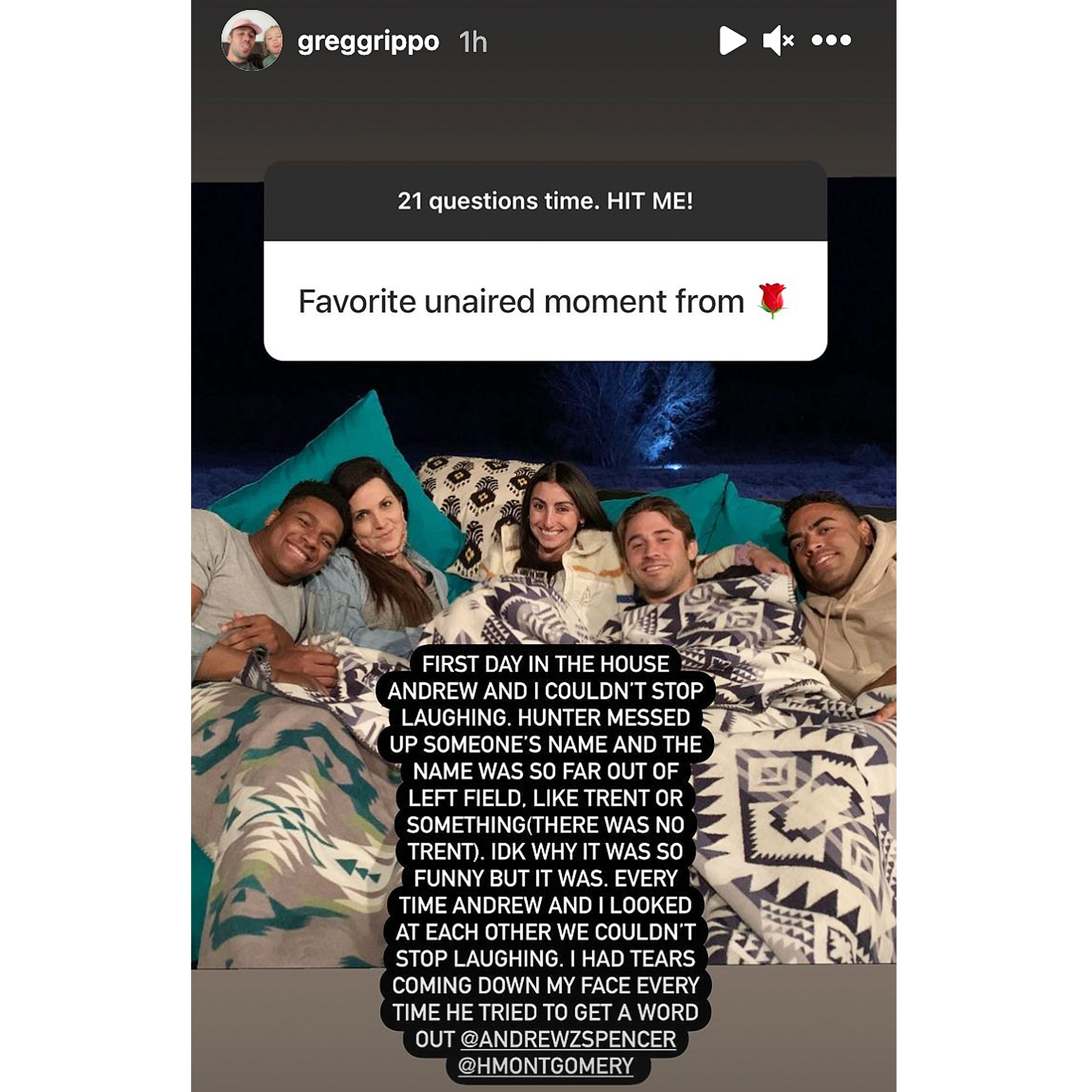 The Bachelor alum, 30, accused her ex of “gaslighting” her during After the Final Rose, leading him to apologize for the way he handled their breakup. However, he denied faking his feelings for her.

Everything Mike Fleiss Has Said About ‘Bachelor’ Season 26

Thurston defended her decision to confront Grippo after the tense exchange aired. “After the Final Rose is about kind of speaking your own truth and getting it out there for that final closure,” she exclusively told Us Weekly. “And really that’s what Greg and I both were able to do. And we’re ready to just close that door forever and move forward. You can be happy and in love in your relationship, but still be upset with how someone treated you in the past and you want to speak on it.”

The New Jersey native, for his part, admitted that the conversation opened his eyes to the former bank marketing manager’s point of view. “I came off like an ass, came off like a petulant child at times,” he said on the “Viall Files” podcast in August. “And I regret it because, you know, at the end of the day, she didn’t deserve that. I definitely projected a lot of my insecurities and my anger in that moment.”

Us revealed last month that Grippo is being considered for the season 26 Bachelor role, despite how his actions on The Bachelorette divided viewers. According to a source, “It’s not about whether fans like the lead or not, it’s about who’s going to have people tune in and bring in good ratings.”