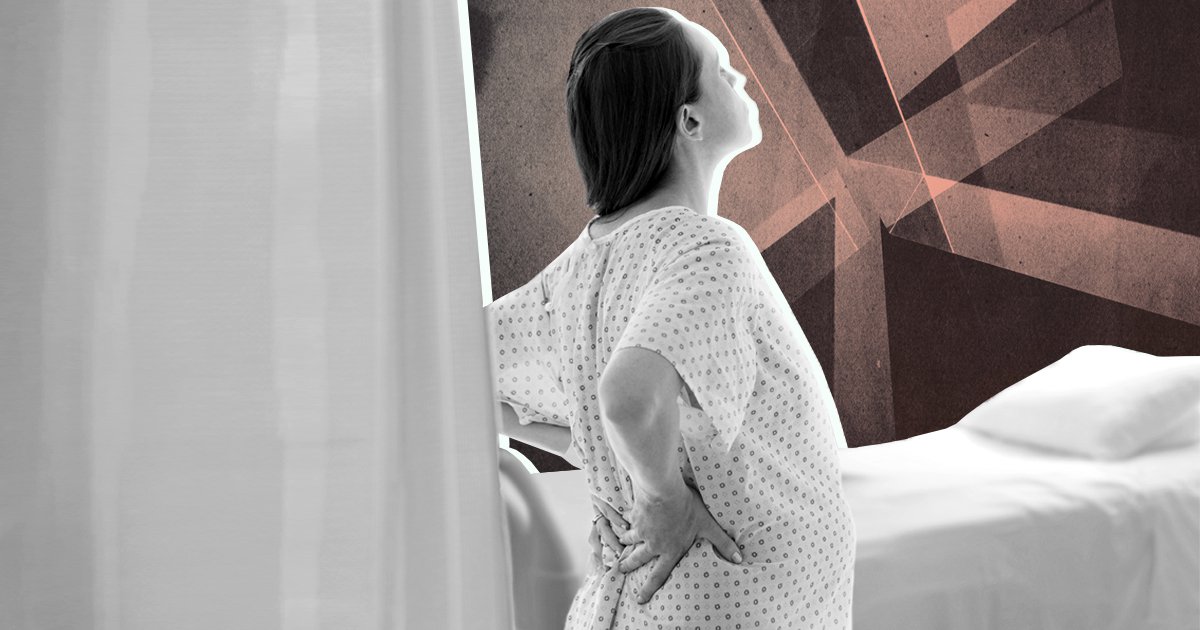 One thing that helps? Having a supportive partner there to hold your hand (even if your nails are digging in) and do whatever they can to make the whole labour process easier.

That can be easier said than done.

As difficult as giving birth is, spare a thought for the partners who – in many cases – are at a total loss of what to do… and end up doing the complete wrong thing.

Take Alec Baldwin, for example, who apparently ‘shushed’ wife Hilaria while she was in labour with their son, Rafael.

Partners might have the best of intentions, but confronted with their loved one screaming in pain and on little sleep, it’s easy to mess up.

But there are some things you definitely should not do.

Ahead, mums share the mistakes their partners made during the magical moment of childbirth. Learn from these examples. Do not do these things.

‘When I gave birth my partner “couldn’t cope” with the stress and left the hospital as I was being prepped for an emergency C-section,’ Hannah tells Metro.co.uk.

‘He finally reappeared once the drama was over and half an hour later announced he was going home as he was tired. There were still hours left before visiting hours closed!

‘It was an example of how someone couldn’t put their own feelings aside for their partner and chose the selfish route!

‘It’s safe to say we are go longer together.’

Don’t make a change to the playlist

Jay Stansfield remembers: ‘I put some music on and it started blasting out The Beatles. My wife wasn’t impressed. I thought it was funny.’

One mum says: ‘Don’t question her music selection – a friend’s husband changed her relaxing playlist to his hard rock – then promptly fell asleep, leaving her stranded in agony in the cold birthing pool, forced to listen to his rock for two hours.’

Remember: your partner is hungry, too – but also doing the hard work of birthing a baby.

‘I gave birth on Christmas day (27 years ago this year),’ says Sarah. ‘My hubby sat and and ate a full Christmas dinner next to me whilst I was given iced water.’

Don’t complain about any pain

Dee recalls: ‘I was in labour for four days. My husband had to leave the room when I had an epidural because it made him feel faint.

‘He also complained constantly and still brings it up now about how sore his bum chafing was because he was sat in the same clothes on a plastic chair the entire time – and didn’t listen to me when I told him to bring a bag with a change of clothes.’

Another mum warns partners: ‘Don’t say your back hurts because you’ve been bending over the birthing pool for 30 minutes (and she’s been having contractions for three days).

‘Similarly, yes, your thumbs might be tired when you’ve massaging her back for two minutes – but best to just keep it to yourself and suffer in silence.’

Don’t dismiss labour as ‘not that bad’

Jen tells us: ‘My ex, after a five-day labour and my son getting stuck and not breathing initially, had the cheek to turn around and say: “see it wasn’t that bad, I don’t know what all the fuss is about”… as they were stitching me up (episiotomy).’

Josie remembers: ‘With my first, I was in hospital several days before I was induced.

‘My husband was by my side for support, but got so hungry he ate all the snacks I’d packed in my hospital bag.

‘For my second and third pregnancies, we both remembered to pack snacks for him and me.’

Suzanne has some simple advice: ‘Don’t fart in the car just before your wife gets in and has a contraction.’

‘After my C-section, I was so drowsy I fell asleep with a cheese sandwich in my hand,’ Tina tells us. ‘I wake up and it’s gone…. Apparently if you snooze you lose.’

‘The trauma he faced after it was unreal, poor guy. Since then, he always asks if I have finished my food.’

Simple advice from Tracy: ‘do not go take a nap’.

Abi agrees: ‘The nurse told my husband to pull up a chair and get comfy as it could be a long night… he got two chairs, sat down, put his feet up, pulled his coat over him and fell asleep! I was fuming.’

Don’t mess up the contraction count

Harriet says: ‘My husband kept forgetting to time the contractions when I was at two minutes and 45seconds and progressing fast and we were working out whether to go into hospital – four times in a row.

Don’t complain about being tired

Pippa remembers: ‘After 22 hours of labour he said he was tired.

Don’t steal the gas and air

‘He took the gas and air off me because he said I’d got addicted to it last time,’ says Caroline S. ‘It was the critical moment: the crowning.

‘The midwife told him off – and to give it back immediately.’

‘He thought it was really funny to hold the gas and air really far away,’ says Leanne.

‘He literally almost wet himself laughing when my consultant told me to push and I pushed out the catheter and weed straight into her face (I had an epidural by this point).’

Try not to faint

There are a lot of stories of partners needing to leave the room because they feel faint, or just passing out and thus distracting medical staff.

It might be worth working on any squeamishness during the pregnancy.

Don’t be too busy to show up

‘My charming ex partner was too busy to turn up at hospital when I was giving birth,’ says Caroline J. ‘Pretty bad behaviour, I think…’

Firgas says: ‘I have four kids. When my eldest was born, we had a room in a birthing suite. My husband commandeered the bed and fell asleep for about eight hours, then played Angry Birds while I was pushing.

‘He almost missed the birth of our second son (not his fault really, one of those taking an hour to park situations).

‘Third son was induced: Rich redeemed himself by bringing a laptop loaded with rubbish Zombie films (really good to watch whilst screaming in labour) and then had a bit of gas and air himself while watching them.

‘Son four was also induced and I pretty much banished him until the last moment.’

Don’t nip out for a McDonald’s

Charlotte tells us: ‘While I was in labour, my husband wandered off for a McDonald’s halfway through.

‘I was high on pain relief and didn’t mind, but friends are always shocked when I wheel out this anecdote.’

‘My brother in law was given an IV to sober him up when my sister unexpectedly went into labour while he was on a night out with his mates,’ Elle tells us.

‘My partner at the time was useless,’ says Rachel. ‘I was sweating so much. I felt like I was burning and the only request I made was for a wet flannel to cool me down.

‘He came back with a boiling hot one “so I could wash the sweat off”.’

‘Your fantasy football team actually probably can wait – unless you’re both whiling away some time during a long labour,’ one mum advises.

Holly says: ‘My partner’s dad brought the TV to the hospital to watch the FA Cup final – while his mum was in labour.’

Don’t beat yourself up

Look, if you say the wrong thing or don’t manage to know exactly what your partner needs in any given moment, try not to panic.

This is a difficult time, tensions are high – as long as you try your best and can laugh about it afterwards, you’ll be fine.

‘Basically it’s the hardest job in the world being a birth partner, but the loveliest moment is afterwards when they look at you and say more genuinely than they’ve said anything in their life: “I can’t believe what you just went through for us”.’

Also, before anyone gets too annoyed at us for partner-bashing, hold tight. We’re publishing an article about all the brilliant stuff partners did during labour later on today.

A midwife’s advice for being a great birth partner:

Lesley Gilchrist, registered midwife and co-founder of My Expert Midwife gives five tips for being a brilliant birth partner:

Know your partners’ wishes… but don’t speak for her

Working on a birth plan together means that you’ll know what is important to your partner so you can support her when labour starts.

But don’t speak on her behalf – she is the only person who should make decisions, but you can support her words.

For example, if she decided she does not want pain relief, but the midwife keeps offering it, you can support her by saying: ‘Please could you stop offering – she’ll tell you if she changes her mind’.

At the same time, listen carefully in case things change. Your partner may have made the decision before labour that an epidural is not for her but, if she changes her mind then listen! Talk to her and, if she is very clear, then you can help support her wishes.

Boost that love hormone… but only how she wants you to

One of the most important hormones in labour is oxytocin. It is vital for effective contractions and triggers the production of pain-relieving endorphins.

Loving touch, hugs and words can boost oxytocin in both of you. Touch, like massage or stroking can help to boost oxytocin, so do whatever feels right to her.

But some women hate being touched in labour, and this is totally normal, so if that’s the case, use your actions and words. Tell your partner how proud you are of her, how beautiful she is, how much you love her.

Be her cheerleader – especially when things get tough

Your job is to tell her how great she’s doing and to encourage her when she’s struggling.

Some great phrases are, ‘You are doing so well’, ‘You can do anything for a minute… it’s passing… nearly there…’, ‘Relax your shoulders, relax your body’.

How your partner feels in labour may change as it progresses. She might be quite chatty or laugh and joke in early labour – this can be a great way to relax and let the hormones flow!

But as labour progresses, she may become less communicative. This is completely normal and is often called the ‘birth bubble’.

This can be disrupted when she is asked questions about her care. You can help to protect the ‘bubble’ by responding to questions, giving answers that you have agreed in the birth plan – but each time say to her “is that right?” so she can just nod or shake her head so the decisions remain hers.

Look after yourself… but choose your moments

Take care of yourself so that you can fully support her. This means that you will need to stay hydrated and energised.

But choose the right time – popping off for a drink when she needs you would not be great.

So think carefully about what you’ll need when you pack your hospital bag and be sure to refill and relax when it’s ok with her.

Do you have a tale of your partner being terrible – or brilliant – while you were giving birth?

Tell us all about it in the comments below, or by emailing MetroLifestyleTeam@Metro.co.uk.