I’m about to leave London, but without my best white shirt. Since last week, it has been held hostage by the perpetually malfunctioning washing machine in our short-term rental. The machine’s pump won’t work, the thing is full of water, and the door won’t open.

I tried to phone the owner, but the number kept going to message. That’s why we have no internet (no one has given us the code); that’s why we have only two bath towels between three people (I’ve volunteered to use the bath mat); and that’s why there’s a shower nozzle that slumps from the wall at such an angle you must press your head against the tiled wall in order to get your hair wet.

Those tiles, by the way, don’t indicate an excessive regard for cleanliness. 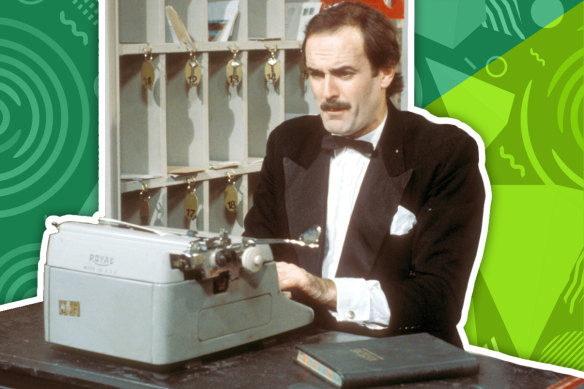 At least Basil Fawlty was on hand to accept the complaints.Credit:Kathleen Adele

I know many people are fans of Airbnb, Stayz and the others. They talk of the lovely book-lined flat in Paris or the relaxing beach house in Byron with the great views.

I believe their accounts, but can only go on my own experiences: always negative.

The accommodation websites – with their “hosts” and “guests” – are celebrated as disruptors, sweeping away the dusty hotels of the past and summoning up a shimmering future. I’m not so sure. Each Airbnb rental throws me into a reverie of time spent in a proper hotel, motel, pub or even caravan park – anywhere with an actual staff, actually on the premises.

The last time I rented a place was about a year ago. It was a house down on the South Coast, a house in which “dogs are always welcome”. Well, that’s what it said on the website, but once we arrived the place was festooned with signs. The various notices, fluttering on the fridge or taped on the back of the front door, warned of fines if “the guest” failed to wheel out the garbage bins on the appropriate night (“we will charge you a $160 rubbish removal fee”), and instructions on the thorough cleaning required before departure.

Then, more problematic, another sign bellowing: “Dogs are welcome BUT NOT IN THE HOUSE. Fines apply.” The sign failed to nominate the level of penalty to be applied in the matter of canine crime, so I decided to take my chances. Then, on the morning of departure, I spent a good hour double-vacuuming to remove all traces of Clancy. I must have been successful; no fine was issued.

The South Coast place was bad, but not the worst. A few years before, we’d rented a house in the hills, with broken air conditioning and a note on the kitchen table suggesting the “guest” hose down the whole western side of the house -“do it every day at 5pm” – as the only method of making the house habitable at night.

Or, a few years before that, it was a place in Spain where the host offered free local wine if we didn’t review the place as he was trying to fool the tax department that he never attracted any customers.

Before Airbnb and all the others, people would complain in similarly aggrieved terms about the shortcomings of hotels. “It was like Fawlty Towers,” we’d all say. But at least Basil Fawlty was on hand to accept the complaints.

And some things about hotels were great: the shoe-polishing machine they sometimes had near the lifts; the ‘pillow library’ available in the fancier joints; or the minibar against which you could wage a battle of wills. “Beer and peanuts?” the minibar would ask at 5pm, only to be rebuffed – “not at those prices, do you think I’m crazy?” – the battle continuing into the early evening.

Of course, victory would ultimately go to the minibar, but at what time? 6pm? 8pm? 10.30pm? It was fun to see how long you could last.

In our London sinkhole, I finally get through to “my host” after five days of calling. He sends around the maintenance man. This chap takes a look at both the washing machine and the shower nozzle, then declares he’s not willing to touch either as it might cause flooding, and he’s not a plumber, so his insurance won’t cover any resulting damage.

He leaves, my best white shirt still locked in its watery prison.

I set about cooking dinner for a friend. I’m using the world’s smallest pasta boiler, the world’s cheapest wooden spoon and a frypan that would be defeated if asked to fry any more than three eggs.

My friend arrives. He’s a wiry chap, fit and thin. He’s been doing his reporting work on a bike, whizzing around the town. I gesture to him to sit at what passes for the dining table. He lowers himself onto a chair. It instantly collapses beneath him, the spindly legs bending as if he weighed 500 kilos.

He lifts himself off the floor and brushes himself off. “Next time,” he says, “you should consider staying in a cheap hotel.”

He has a point. Others love the “disruptors”, but for me the only thing they disrupt is my equanimity.

P.S. Bet they charge us for the broken chair.

To read more from Spectrum, visit our page here.