When Perth rapper Jaycee remixed the Peppa Pig theme song for a bit of fun two years ago, he didn’t expect the 15-second clip to reach 2.2 million likes. But it did, and the post propelled his career into the stratosphere.

“I pretty much turned the theme song into a rap song,” Jaycee told The Sydney Morning Herald and The Age. “I put some drums over it, and made a little rap about eating pigs.”

As unusual as it sounds, it’s just one example of how TikTok is helping Australian artists speed through – and sometimes even entirely bypass – the process of signing onto record labels, the traditional route to musical success.

Thanks to the social media platform, music fans are hearing and discovering talent before major labels, flipping the way new stars are created.

From a small town to the big smoke: Meet Jaycee

Twenty-three-year-old Jaycee ended up moving to Melbourne on the back of his TikTok success. He now has his own record label, Modern Day Entertainment, and is touring along the east coast next month. But as someone who has eschewed the traditional path of musical success, he has had to be persistent. “[I’m] in an industry that doesn’t necessarily show a lot of love to someone doing it the way I’m doing it,” Jaycee says.

He has amassed more than 1.3 million TikTok followers and 7 million song streams — just two years ago, Jaycee’s fan base had less than 1000 people. 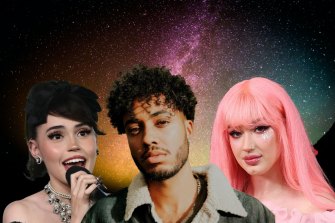 Joining TikTok in 2019, Jaycee says he was drawn in by the app’s “For You” page: a feed of video content curated by the platform, using algorithms, to fit a user’s tastes. “I knew straight away that it would be massive for my music career,” he says. “[It lets you] show your content to people who have never heard of you.”

TikTok states that “neither follower count, nor whether the account has had previous high-performing videos, are direct factors” in determining the videos that appear in a user’s For You feed. That has allowed accounts without established followings to have their videos quickly go viral.

What’s the secret to success on TikTok?

While content creators can lean into trends, including popular sounds, dances and hashtags, Jaycee says that following what worked for other people was a mistake. “I tried to do what was trending on TikTok like dance videos, model videos, but that didn’t work because I’m not much of a dancer,” he says. “Then I came back in 2020 and started doing remixes of popular audio.”

Artists can build their following not only through people interacting with their videos and profiles directly, but also through viewers taking their “sounds” – the music, sound or voice-over in a content creator’s video – and using it in a new video. Jaycee’s most popular song, F— With Me, has been used as a sound by more than 10,000 people on TikTok.

But because the app is always changing, Jaycee says that what works now might not work next month. “The stuff that got me viral first off won’t work now,” he says. “You’ve got to always be scrolling and be a part of the TikTok community. It’s like a full-time job.”

Jaycee pins his TikTok success on three things: creative ability, not being attached to the outcome of videos and the fact that he hasn’t stopped posting on the platform. “I post [videos] about twice a day on average,” he says.

Globally, the top song on TikTok last year was from a local artist. Masked Wolf’s Astronaut in the Ocean, which quietly flew under the radar when it was released in 2019, reached number six on the US Billboard chart two years later. The song has since been used in more than 18 million videos on TikTok.

TikTok’s music director for Australia and New Zealand, Ollie Wards, says the platform is an increasingly important discovery tool. “The A&R departments of labels and management companies are definitely finding people on TikTok, probably more these days than seeing them at shows or actually going out to physical events,” he says. “It’s like a cheat sheet for the music industry.”

A&R – artists and repertoire – is the division of a record label or music publishing company responsible for talent scouting and artistic development of recording artists and songwriters.

EMI’s A&R creative and scout Helena Ho says TikTok has become a part of her everyday scouting process. “TikTok has emerged as an additional resource that helps us scout talent, in the last two years especially,” she says.

“The A and R departments of labels and management companies are definitely finding people on TikTok … more than at shows or physical events.”

The platform allows EMI to have a better idea of an artist’s work and how they connect with followers, with Ho saying, “It’s an exciting way for us to connect with new artists on a personal level”.

Wards says TikTok has also helped artists to operate independently. “There used to be a middle part of the process where you’d need labels and others to be able to get you in front of fans,” he says. “[TikTok] is giving people the opportunity to actually have a music career without necessarily going through that whole thing of getting discovered and getting signed by a major label.”

Compared to other social media majors, TikTok is filled with candid videos and insights into artists’ lives through videos taken in bedrooms, cars and backyards with a front-facing camera. Wards says artists’ authenticity on the platform is a key differentiator.

“Artists including Peach PRC are not just sharing her music and sharing the stories on her songs,” he says. “She’s sharing issues with mental health and her personal life and people are really identifying with that.”

Wards says personalised feeds of content means artists across genres can attract an audience. “All of these artists do something quite different,” he says. “Yet they’re finding a big audience, and I think that shows that [the app] is personalised. Content will find its way to the audience who wants it.”

So how can an aspiring artist be successful on TikTok? Jaycee’s advice is to “make a start and don’t get attached to the end result”. As for his own career? He says he wants to “build this thing to the stars. I want to be one of the biggest stars in the world”.