A coalition of large renewable energy investors is warning Australia could lose access to billions of dollars in private funds needed to transform the electricity grid to 100 per cent clean energy unless proposed power market reforms exclude fossil fuels.

An unprecedented suspension of the energy market is expected to be fully lifted as soon as Friday, with the Australian Energy Regulator writing to power companies on Thursday evening telling them to act in good faith and not to withhold any available electricity supply from the market. 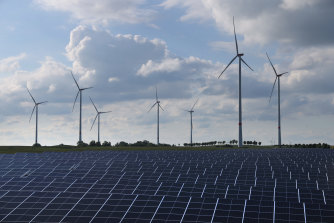 An unprecedented suspension of the energy market is expected to be fully lifted as soon as Friday.Credit:Getty

The Clean Energy Investor Group – representing developers holding $9 billion across 49 power projects nationally including Macquarie, Neoen and BlackRock – said a capacity mechanism could stunt the next wave of wind and solar projects urgently needed to replace retiring coal-fired generators if it was not properly designed.

“Designed badly it [the capacity market] could really confuse investors, particularly if there is any attempt to provide payments to thermal [coal or gas] generation where it really is not necessary,” he said.

The capacity market reform, proposed by the Energy Security Board (ESB) and presented to energy ministers on Monday, would direct payments from retailers to power companies that can be on standby to supply electricity and fill unexpected gaps in the grid when the wind isn’t blowing and the sun isn’t shining.

The board is calling for a “technology neutral” policy that could be applied to grid-scale batteries, pumped hydro, gas and coal as well as renewables.

Federal Energy Minister Chris Bowen and the board say the scheme will target renewable investment but the states should be left to decide if fossil fuels are included.

Critics of the proposed reform, including environmental activist groups and the federal Greens, fear the policy will be designed to favour existing fossil fuel generators. Victoria has said it will not back a reform that is designed to make payments to coal and gas while NSW is open to gas but not coal.

Corbell said a capacity mechanism was needed to solve the “long-term problem” of attracting massive investments in dispatchable capacity projects, such as pumped hydro and batteries, which must grow from a total capacity of around 20 gigawatts today to 60 gigawatts by 2050.

Rather than including fossil fuels in such a long-term market reform, Corbell suggested state governments considered striking deals with power plant owners to fund their ongoing operations until they can be safely replaced with large-scale renewable storage.

The ESB’s proposal to allow differing state-by-state approaches to the capacity mechanism has also sparked concerns among big energy users and large power generators, who say a nationally consistent scheme is vital to reducing costs and complexity in the market.

Corbell said different rules across states could hamper renewables investment, while international examples of gas and coal being included in capacity markets had “seen incumbent generators remain in the system longer than needed”, which he said “weakens investment in new technology”.

Gas plant operators could be “paid twice” if they are included in the scheme, he said, because their business model is based on operating fast start plants that are only switched on at periods of peak demand when they are paid a high rate for providing capacity to prevent electricity blackouts.

Power companies created chaos on the grid last week when they withdrew offers to supply significant amounts of electricity into the grid, following the market operator’s decision to put a cap on spiralling prices that electricity generators are charging for wholesale power.

The withdrawals promoted the market operator to use extraordinary powers to direct companies to end their withdrawals and offer the power back into the market – a process which triggers compensation payments.

Federal Climate Change and Energy Minister Chris Bowen will on Friday announce $45 million in funding for the Australian Centre for Advanced Photovoltaics, which he said was a “world leader in solar research and innovation”.

Funding was delivered through the Australian Renewable Energy Agency to support its 30-30-30 goal – to improve solar PV cell efficiency to 30 per cent and reduce the cost of installation of solar modules to 30 cents a watt by 2030.