This is the recession we could not avoid but which nobody wants to own.

Josh Frydenberg is moving as fast as he can to make this horror slump a test for state premiers in how they open their economies. 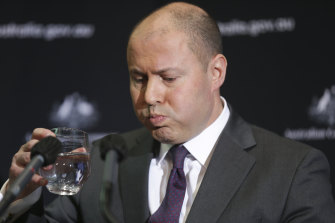 The Treasurer could not sugar-coat the numbers on Wednesday and admitted to presiding over the greatest fall in economic activity in decades.

He named the cause: a pandemic he could not stop. He offered a solution: a $314 billion stimulus. He signalled more spending and faster tax cuts in the budget four weeks from now.

But he tried to spread the blame on the big question: will things get worse?

To hear Frydenberg, it almost sounds like this is the recession Daniel Andrews made us have. The conclusion does not hold up to the slightest scrutiny: the shuddering halt to economic activity came after deliberate, agreed decisions in national cabinet over months.

Those decisions were overseen and announced by Scott Morrison as Prime Minister and they included travel bans, business shutdowns, social restrictions and more.

After two quarters of economic contraction, everything turns on the September quarter. Frydenberg says it will be "slightly negative or flat" but the result depends on Victoria, where another 400,000 workers are expected to lose their jobs or see their hours cut to zero.

Andrews cannot be singled out for blame for the slump to June 30, most of which came before the second wave in Victoria, but he will have to share responsibility for what comes next.

The nation's economic fate depends in part on how the Victorian Premier brings the state outbreak under control.

It also depends on Queensland Premier Annastacia Palaszczuk. How long will her border closures keep punishing her state's employers when NSW has only 175 active cases (and falling) in a population of 7.6 million? The answer, of course, is as long as it takes to win the October 31 state election.

So there will be plenty of blame to go around if this recession drags on.

Labor mounts an opportunistic attack by warning against cuts to JobKeeper and JobSeeker. With about $42 billion in JobKeeper payments made so far, the government is hardly withdrawing its stimulus. It will pay another $59 billion by the end of March.

Even so, the Labor attack will force Frydenberg to devise a better answer on income support in the October budget, especially on the permanent JobSeeker rate for the swelling ranks of the unemployed. The sooner they have certainty the better.

Paul Keating owned the outcome when he confirmed the "recession we had to have" three decades ago.

Frydenberg would rather disown this one. He made no memorable quip to describe the recession we could not avoid. He offered a bland and technical presentation instead, as if he feared making a remark that would be pinned on him for years.

Yet he cannot escape his share of the responsibility for the recession on his watch. Asked about his plans for recovery, he named infrastructure spending, cuts to red tape and workplace relations reform – none of which are fast enough or powerful enough to lift the economy out of its slump this year.

It was an unconvincing answer. At the very time he asks the states for their road maps to ease lockdowns and relax border controls, the Treasurer's own plan remains a work in progress, to be revealed in the October budget.

Get our Morning & Evening Edition newsletters

The most important news, analysis and insights delivered to your inbox at the start and end of each day. Sign up to The Sydney Morning Herald’s newsletter here and The Age’s newsletter here.