The Duchess of Cambridge showcased the best of British fashion with her elegant choice of dress at tonight’s Earthshot reception at COP26.

The royal, 39, stepped out in a coat dress from London-based brand Eponine and coordinated navy accessories from LK Bennett as she joined Prince William, also 39, at the Clydeside Distillery in Glasgow.

Despite the dress being from the brand’s SS20 collection and Kate frequently wearing Eponine, it is believed to be the first time that she has been photographed wearing the coat.

However, she’s been pictured more than a dozen times in her £425 heels from fellow British designer Rupert Sanderson.

The royal has been pictured in the ‘Malory’ pumps at least a dozen occasions, including at the Commonwealth Day service at Westminster Abbey, and to a dinner with the Obamas at Kensington Palace in 2016. 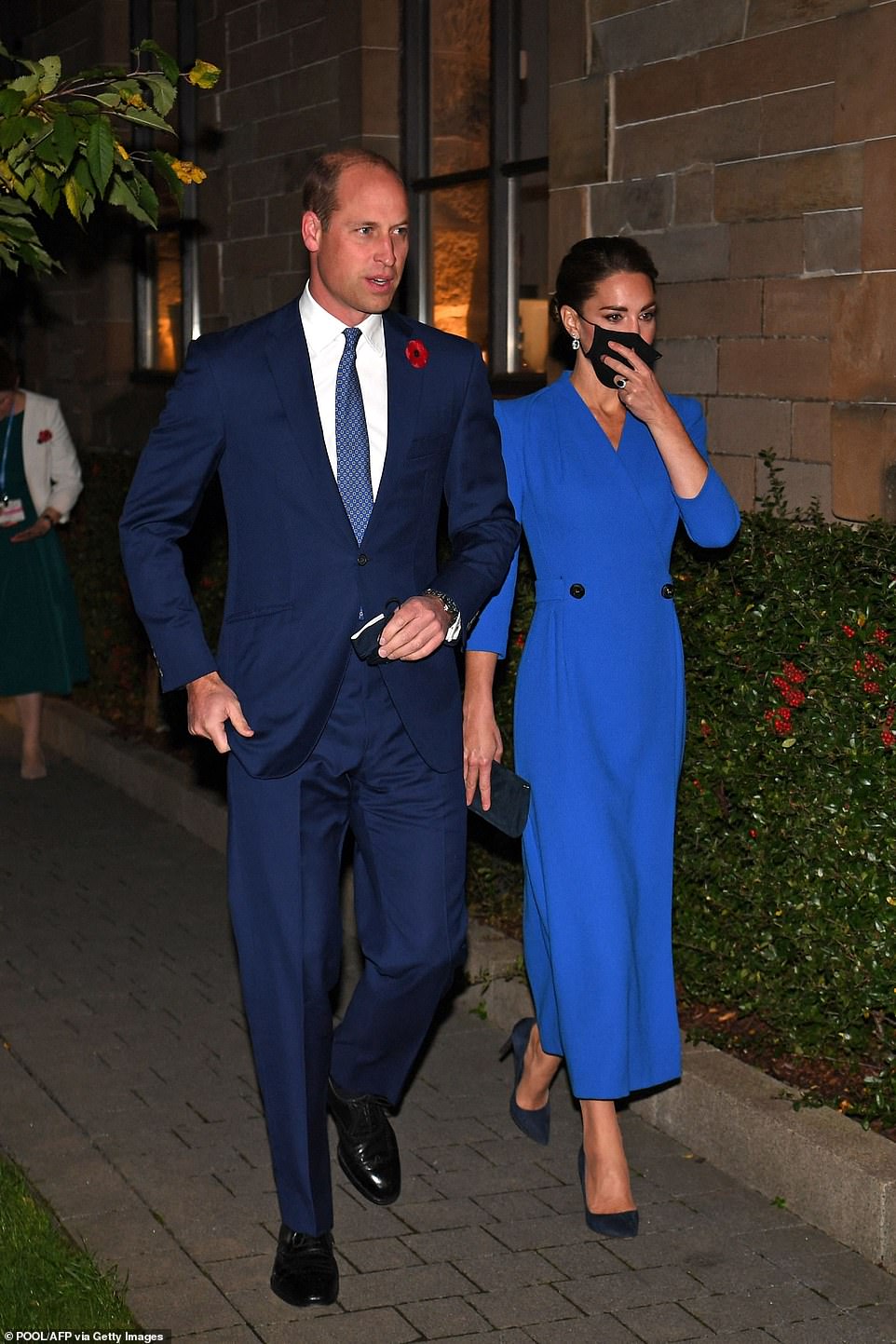 Kate (pictured) opted for a custom dress from British brand Eponine, believed to cost around £2,4000 teamed with her favourite £425 heels from Rupert Sanderson 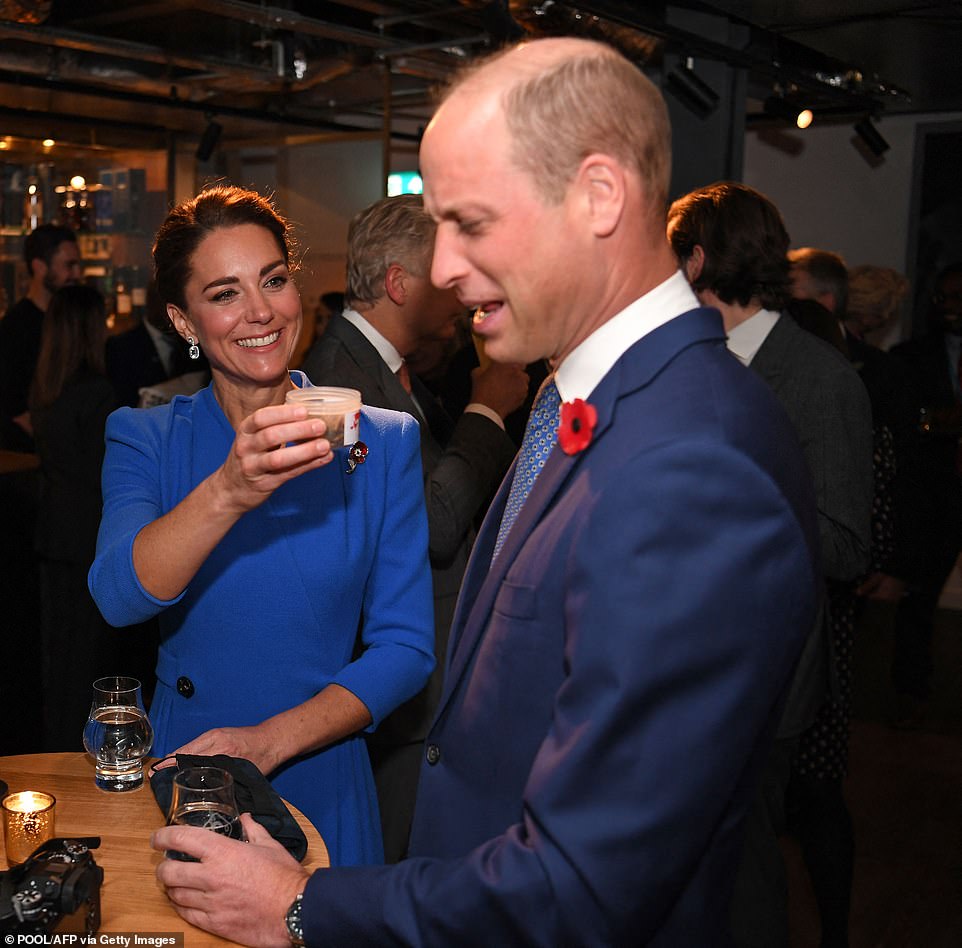 Kate, who is known for causing a frenzy in stores with her fashion choices, donned a Eponine custom piece.

Made from a double wool crepe fabric, the price is available on application but similar dresses cost around £2,400.

She swept her glossy brunette hair into a low bun, which allowed for a full view of the sharp tailoring of the couture dress and its double button detailing.

The Duchess of Cambridge also donned silver drop earrings for understated glamour, alongside Prince William, who looked dapper in a coordinating navy suit and white shirt.

Fashion stylist Rochelle White spoke to Femail about Kate’s choice of outfit at the event, saying: ‘Kate is wearing a dress that she hasn’t worn before, it is a simple and striking in colour. The dress is thought to be custom made for her from Eponines. 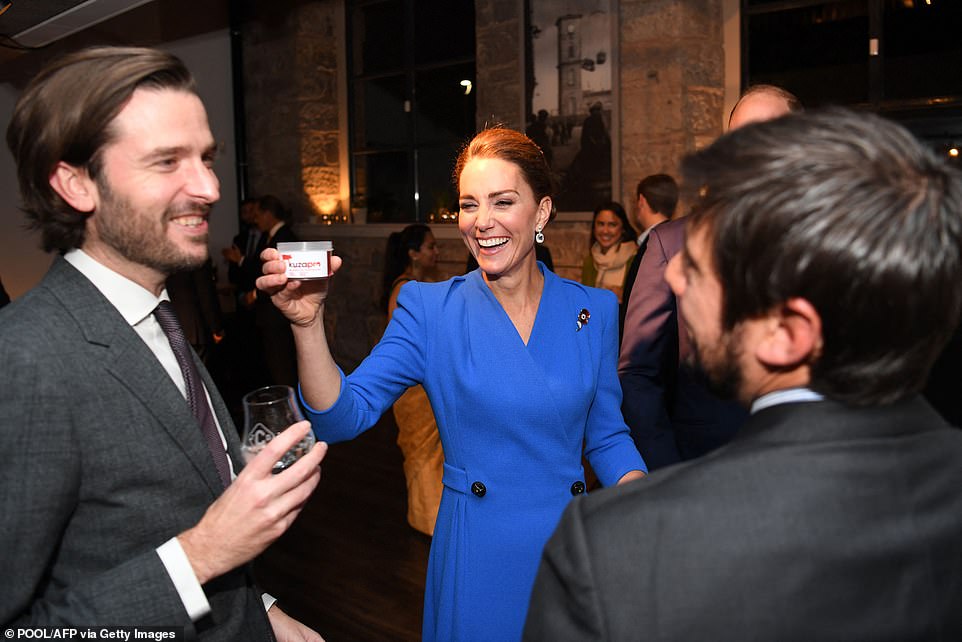 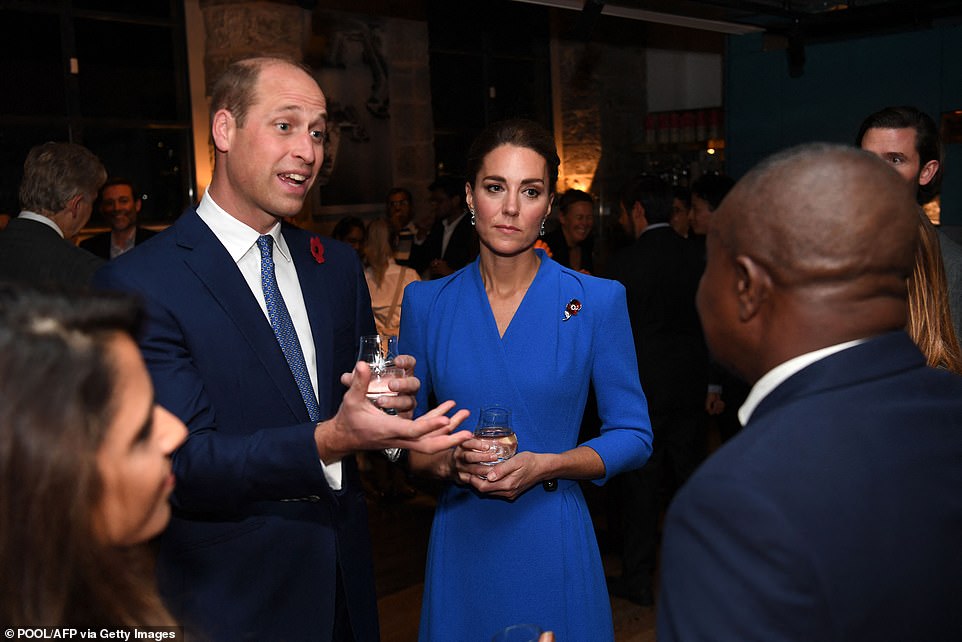 Fashion stylist Rochelle White, explained that Kate had likely made her outfit choice with the idea of not drawing attention to herself. Pictured: Royal couple speaking to guests at the event 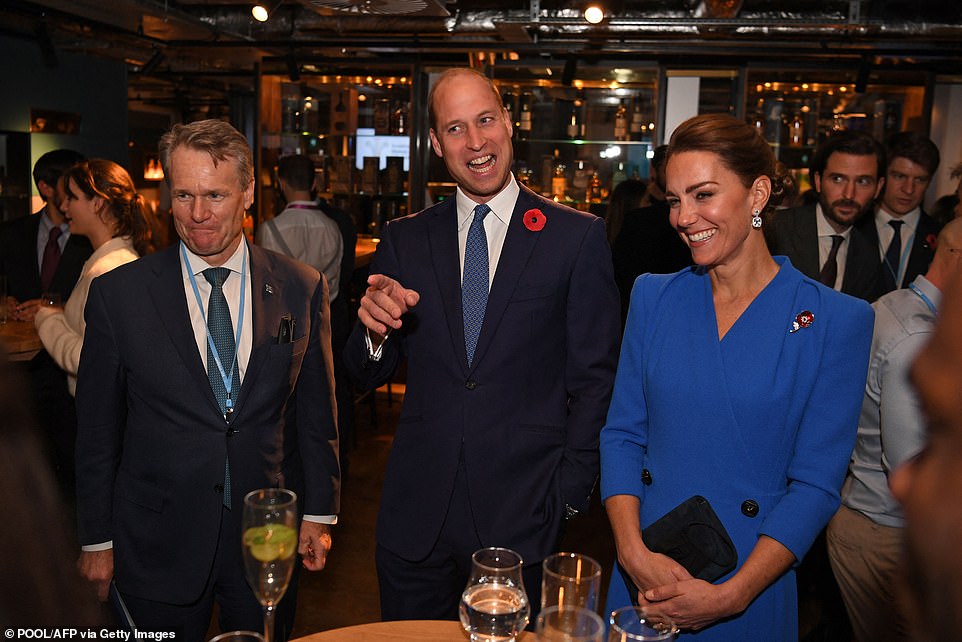 ‘Her dress compliments Williams suit and colour and she has opted for her hair to be up and elegant simple jewellery to accessorise.

‘I feel that Kate has opted for this look, so that the focus isn’t necessarily on her and her outfit, but more for the event. I think it is sublet dress, but the colour makes it standout and adds that something to the look.’

The ceremony tonight was hosted by Prince Charles, Camilla, Duchess of Cornwall and Boris Johnson as well as key members of the Sustainable Markets Initiative and the winners and finalists of the first Earthshot Prize Awards. 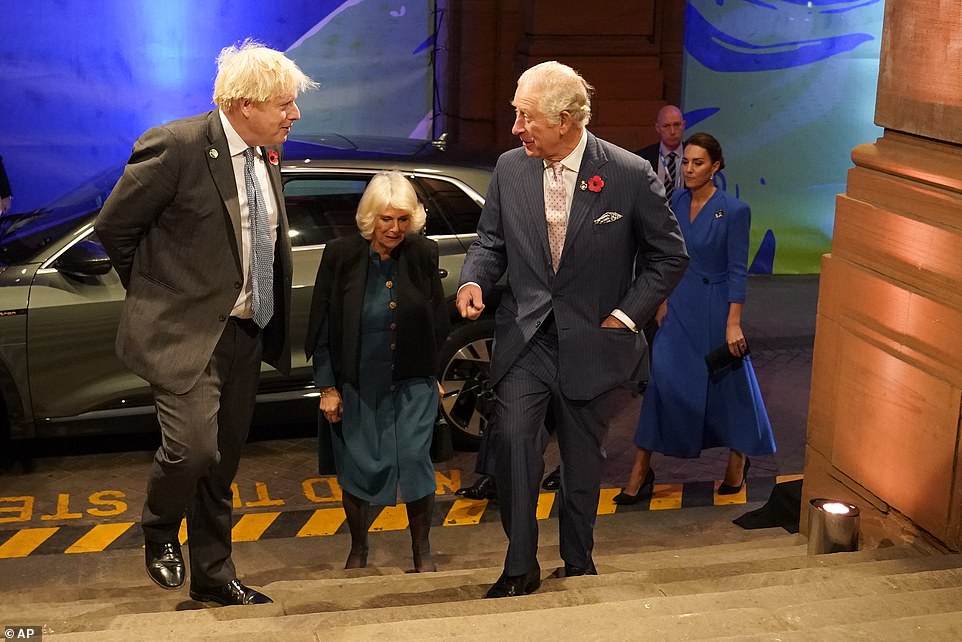 Duchess of Cornwall Camilla, 74, also opted for a shade of blue as she attended the event in a teal dress. Pictured: Prime Minister Boris Johnson greeting Camila and Prince Charles 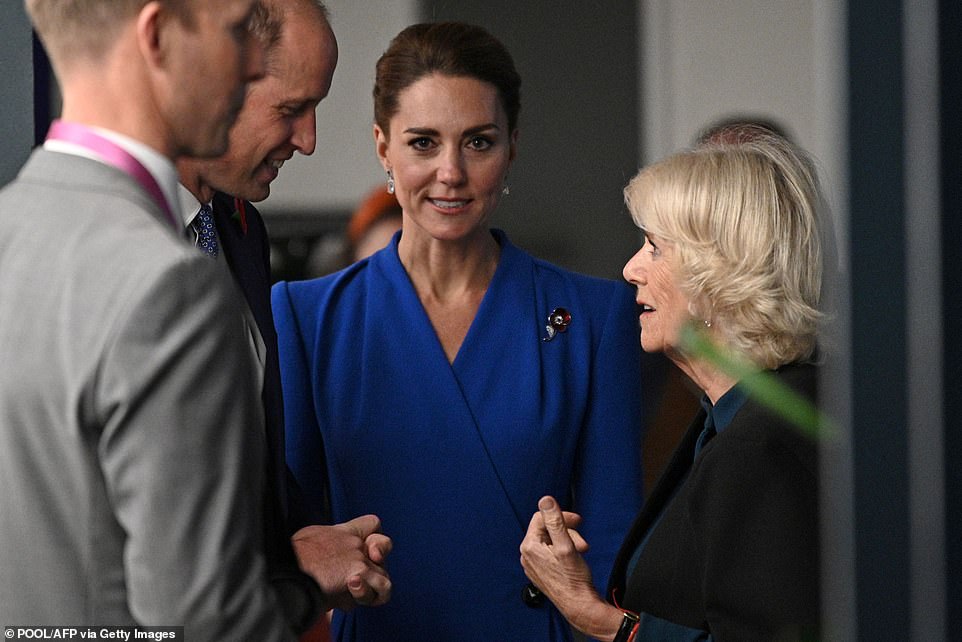 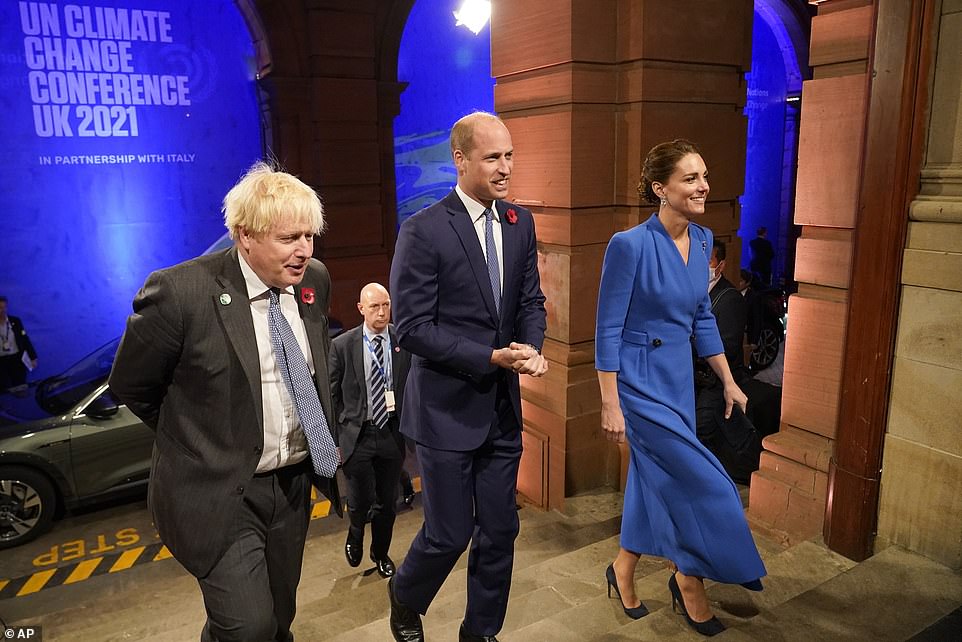 Also going for a shade of blue, Camilla, 74, donned a teal Bruce Oldfield featuring buttons recycled from another outfit.

William and Kate’s appearance comes just hours after royal couple, both 39, visited Alexandra Park Sports Hub in Dennistoun to meet with Scouts from and learn more about the group’s’ #PromiseToThePlanet campaign.

The event marks the first engagement for the couple since they arrived in the Scottish city for the COP26 conference which has brought world leaders together to discuss urgent action on climate change.

The Queen’s decision not to attend Cop26 will be a blow to organisers. There are few people on the world stage who command the same respect and authority as the British monarch. 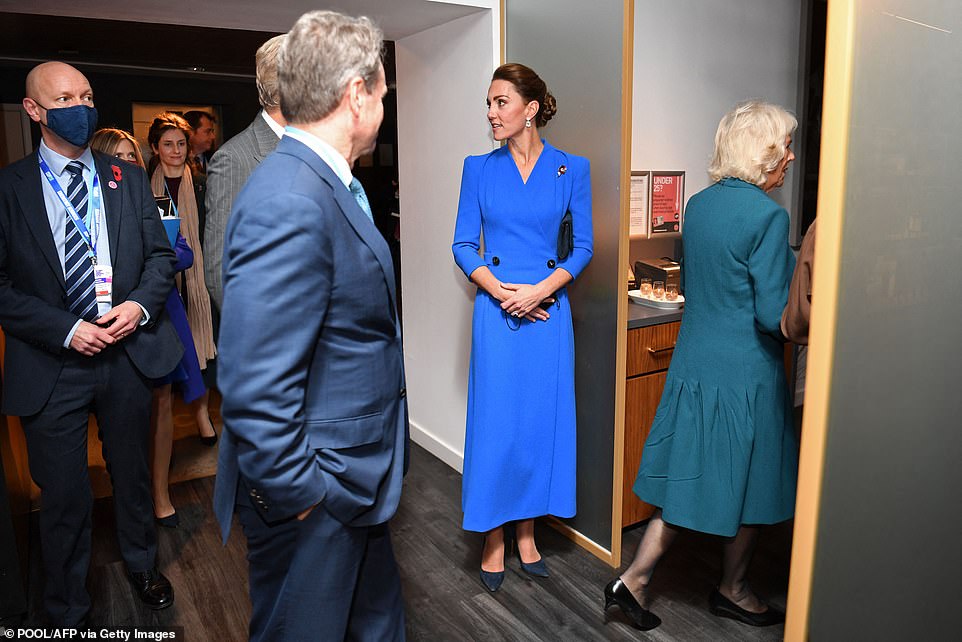 With the head of state missing from the event, it is hoped no world leaders will use her absence as a reason not to attend the summit.

It previously emerged that Xi Jinping – president of China, now the planet’s biggest polluter – is skipping the much-anticipated conference.

Senior royal aides said the Queen will be working hard behind the scenes to make the summit a success.

She will film her video message at Windsor Castle later this week and has let it be known that she ‘very much wants Cop26 to be a success and see meaningful actions’.