The Victorian government spent more than $15 million on legal representation for its inquiry into the state’s botched hotel quarantine program. 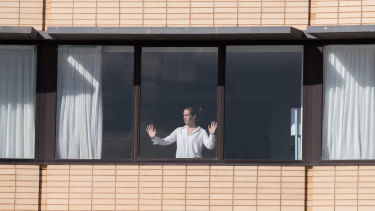 A guest in hotel quarantine at the Tullamarine Holiday Inn in April.Credit:Jason South

The latest figures are in addition to previously published legal bills that showed the Department of Jobs, Precincts and Regions spent $3.7 million on lawyers from Corrs Chambers Westgarth, and $6.25 million was spent by the Department of Health and Human Services.

While the legal bills have been covered by taxpayers, a government source, speaking on the condition of anonymity, said it was likely departments would seek to cover the costs through insurance.

In addition, the taxpayer-funded inquiry, headed by former judge Jennifer Coate, was initially meant to cost $3 million, but it requested a further $2.7 million, bringing its total budget to $5.7 million.

The inquiry ended up costing $4.8 million but was unable to pinpoint a minister or bureaucrat in the state government responsible for commissioning private security guards for the hotel quarantine program.

In her final report, released days before last Christmas, Justice Coate described the decision to use private security guards as an “orphan” that neither Premier Daniel Andrews nor any of his ministers took any responsibility for.

The inquiry found the state’s police chief commissioner at the time, Graham Ashton, was consulted about the decision and “expressed a preference that private security perform that role” and Victoria Police provide the back-up for the program.

State opposition spokesman on police David Southwick said the fact each and every government department and agency, including Victoria Police, sought independent legal advice, proved “they don’t trust each other and they don’t trust the government”.

“One has to ask what these ministers are hiding. They should be made to come clean like everybody else. Victorians deserve the truth,” he said.

A state government spokesperson said the recommendations of the Coate inquiry had “improved our response to fighting the virus and saved lives”.