Lockdown homebuying frenzy sees a record number of moves in 2021, as the average asking price climbs to hit a new high of £338,447

The first half of 2021 has been the busiest year on record for the housing market, it has been revealed.

The frenzied market activity has helped to push up the average asking price of a newly-listed property to a new record for the fourth consecutive month, according to Rightmove.

The average asking price has climbed £21,389 higher in just six months to £338,447, according to the property listing website’s index.

Rightmove’s Tim Bannister said: ‘We predict that the number of completed sales will be the highest ever seen in a single month when June’s data is released by HMRC.

‘This means it’s likely that the first half of 2021 has seen a record number of moves when compared with the first six months of any other year, induced by the pandemic’s side-effect of a new focus on what a home needs to provide.’ 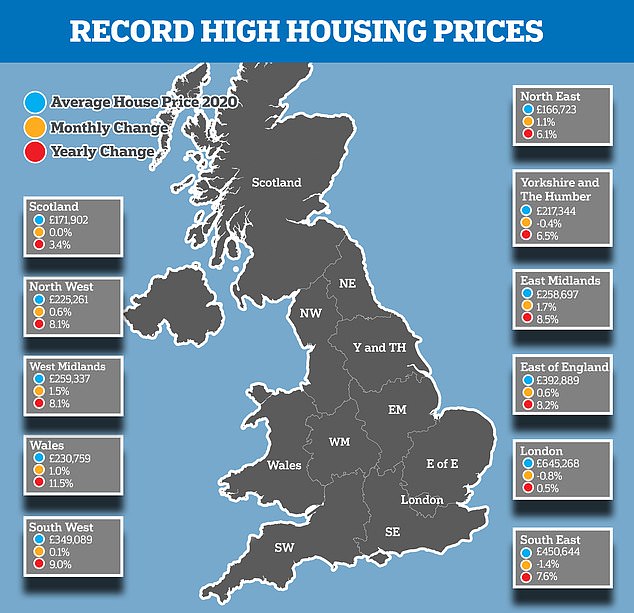 He added: ‘That is one of the driving forces behind four consecutive months of new record average property prices.

Rightmove said that in the month to mid-July, asking prices rose 0.7 per cent – the equivalent of £2,374 and the largest monthly rise at this time of year since July 2007, at the peak of the boom just before the financial crisis.

The price data is based on Rightmove’s asking prices, while the data on the number of sales is a prediction of what the next HMRC transactions will show, based on Rightmove data that looks at properties being marked ‘under offer’ or ‘sold subject to contract’.

Rightmove attributed the increase to a lack of supply of homes for sale and identified a shortfall of 225,000 homes for sale which, if available, would have helped to maintain a more normal level of property stock for sale and stabilise prices.

This stark shortfall, along with frenzied buyer activity, is fuelling record high prices and leading to record lows in available stock for sale.

The high levels of activity have continued, according to Rightmove, despite the end of the stamp duty holiday.

The stamp duty holiday, which ended on 30 June, saw no tax on the first £500,000 of a property purchase price replaced by none on the first £250,000 until the end of September. Stamp duty is due to return in full after that. 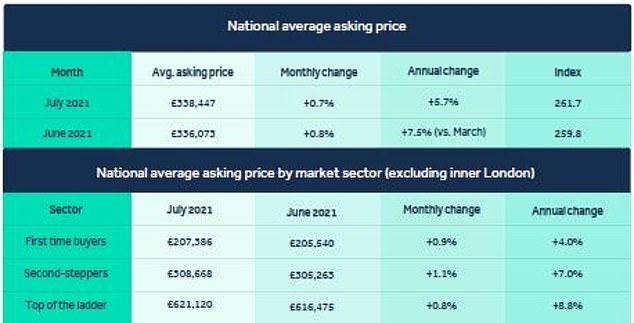 Rightmove said that the average value of a home in Britain currently stands at £338,447

Rightmove said there is an ‘urgent need’ for low stocks of property for sale to be rebuilt so that stability in prices can return.

It comes ahead of HMRC’s latest transactions data, which is due to be published within days.

‘Demand has also been boosted by the ongoing creation of new households, and property being seen as an asset to hold, with historically low returns from many other forms of investment.

‘New stamp duty deadlines in England and Wales for sales completed by the end of June have also helped to exhaust the stock of property for sale and concentrate activity.

‘This has left prospective purchasers with the lowest choice of homes for sale that we’ve ever recorded, continuing price rises, and stretched affordability.’ 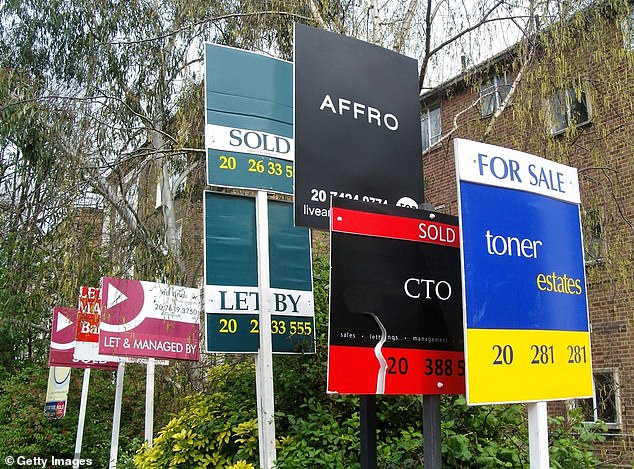 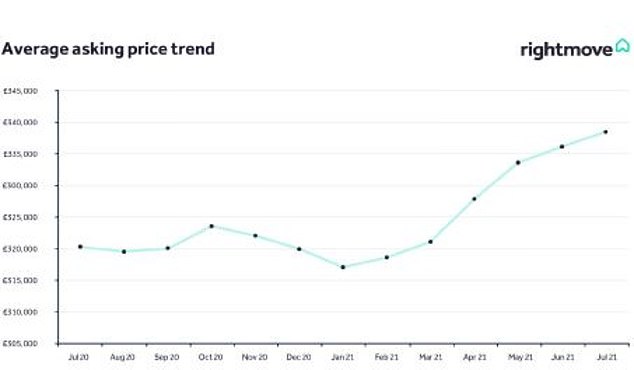 The average house price has risen by 0.7 per cent on a month earlier, the equivalent of £2,374

Rightmove expects that the number of sales completed in the first six months of the year and due to be reported by HMRC later this week is on course to be around 800,000, which could just beat the previous record of 795,000 set in 2007.

The 2007 record was set under very different circumstances, at a time when mortgage lending criteria were much less stringent than in today’s more controlled market.

The net result of this major imbalance between supply and demand is that the average number of available properties for sale per estate agency branch is at a new record low of 16 properties. It compares with the previous low before 2021 of 25 properties and a longer-term average for this time of year of 31.

This is based on Rightmove data for the number of available properties on average per agent on the site. 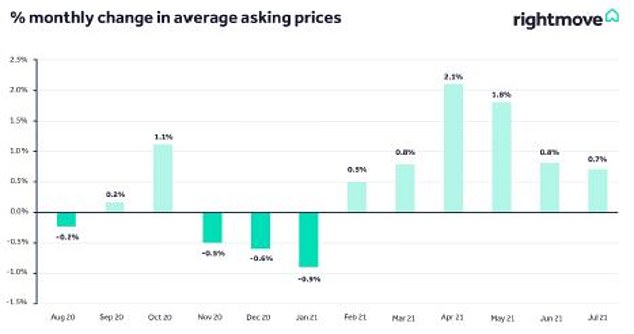 The boom in sales demand and consequent greatest ever imbalance with supply have been most notable in the more expensive sectors of the market.

This massive swing has seen average prices for this sector up by 6.7 per cent in the last six months.

Rightmove’s ‘second-stepper’ category – mainly made up of three bedroom homes – have also seen a marked swing, with 29 per cent more sales agreed and a fall in new listing numbers of 10 per cent. Heady price rises averaging 6.9 per cent in the first half of the year are the result.

Meanwhile, hard-pressed first-time buyers will find that their typical sector of two bedrooms and fewer has virtually the same supply as in 2019, down just 1 per cent. Their sales agreed numbers are also less buoyant, though still 26 per cent up on the same period in 2019.

The stock shortage is therefore less acute, and with prices up by a more modest 3.4 per cent, this could be a relative buying opportunity for those looking to get onto the property ladder, Rightmove suggested. 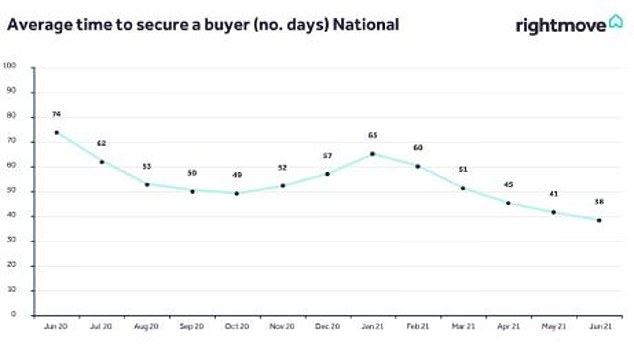 Mr Bannister said: ‘First-time buyers are currently benefitting from their sector having the most buyer-friendly conditions. Choice is still more limited when compared to the same period in 2019, but price rises are the most subdued of any sector.

‘Saving a deposit is still very hard, but 5 per cent is now an option, and with many paying rising rents, buying your own home on a lower deposit is becoming an opportunity again. The opportunity is also there for property owners to come to market, as it’s still a great sellers’ market despite the recent end of the tax holiday in Wales and its scaling back in England.

‘We’ve also seen a much more efficient housing market over the past year, with the strong buyer demand and faster churn of homes leading to a much higher percentage of sellers finding a buyer for their home, and fewer unsold homes being withdrawn from the market.

Estate agents confirmed the high levels of activity in the market and a lack of properties for sale.

‘The number of sellers coming to market has slowed as the year has progressed, which means we’ve seen the level of new listings coming to the market significantly decrease year on year, while in turn total available stock levels across the market is at the lowest we have seen in a number of years.

‘While the number of new listings has dropped, our results remained strong with 945 homes listed accepting an offer. East Kent has also seen the number of buyers looking to relocate to either the countryside or by the coast increase with a fifth of applicants registered coming from Greater London.’

Marc von Grundherr, of estate agents Benham and Reeves, said: ‘The UK property market continues to defy expectation, with house prices reaching yet another record high despite whispers of a decline in values as a result of the tapered stamp duty holiday deadline.

‘There’s no doubt the stamp duty holiday has been the catalyst for this impressive market performance. However, it isn’t the driving factor behind the intent to purchase for UK homebuyers and so a robust level of activity will remain long after it has expired.

‘When you couple heightened demand with a severe shortage of stock, it’s very likely that property values will remain buoyant for the remainder of the year 2021 buyer frenzy reveals 225,000 shortfall in number of homes for sale.