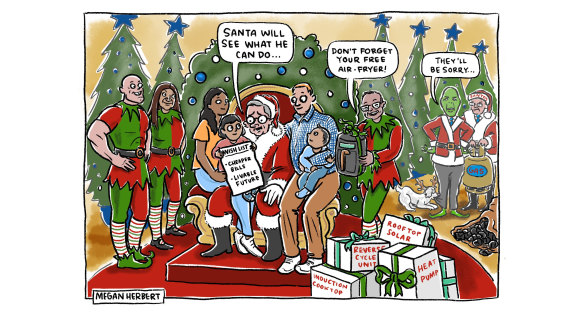 Appalling decision
As a clinical psychologist in private practice for almost 30 years there has never been such a short-sighted and foolish budget cut for people requiring psychological treatment for the community.
To think that an agoraphobic patient who can’t leave their house to get their mail from their letterbox or the chronically suicidal, depressed young mother in an abusive relationship with a school-refusing child will be adequately serviced with 10 Medicare supported sessions over 365 days is laughable.
Out goes early intervention, prevention and community-based treatment and in comes spot-fire management and a further burden on the hospital-acute psychiatric sector once these people and their loved ones deteriorate further. Just appalling.

It’s a good thing
It is interesting that Santos chief executive Kevin Gallagher believes market intervention by the Albanese government is a form of nationalisation. I agree with him. Where I disagree is that he sees this as a bad thing.

Not so free
Twitter has suspended accounts of journalists critical of Elon Musk. What happened then to Musk’s ″⁣free speech for everyone″⁣ policy?

Overhaul needed
The Whitlam government’s vision for a universal, equitable healthcare system remains as important as ever. Sadly, the vehicle created 50 years ago for its delivery, Medibank/Medicare, is now ready for the wreckers.
A fee-for service method of remunerating doctors was always going to be open to rorts and abuses; after 50 years, those rorts and abuses have been perfected by everyone other than the patients the system is intended to serve.
Unscrupulous doctors and entrepreneurial clinics are now experts at both gaming the system and avoiding detection. The states have become masters at ″⁣privatising″⁣ public hospital work in order to shift costs to the Commonwealth. The Commonwealth has failed to index GP rebates adequately.
Meanwhile, general practice is in crisis. The Medicare system encourages ″⁣six-minute medicine″⁣ and makes it impossible for GPs to provide the considered, holistic care we all want. In essence, it undervalues good care. It is no surprise that our GP workforce is inadequate and ageing, as young doctors pursue specialist training elsewhere.
Tighter policing of the system will achieve little. The unscrupulous will always find ways to game it. It will add one more administrative burden to overstressed and underfunded GPs without tackling the fundamental unsuitability of the fee-for-service model.
A radical overhaul is needed to provide adequately funded primary healthcare.

Dinner via Zoom
Pratt privilege. My Sabbath dinners were on Zoom.

Different cuts
While I partly agree with Dr Clyde Ronan (Letters, 17/12) about GPs being able to do minor surgery, it depends where you draw the line. I can remember having a melanoma removed from my nose years ago by a GP and when it healed, leaving a crater, I asked him when he had a similar procedure done on himself where he went. His reply was, a plastic surgeon of course.

Royalty exposed
In 1995, The Age published a letter that I wrote in support of Princess Diana when she was harshly judged for exposing her vulnerability in the now infamous Panorama interview. Some people thought I was a naive royal watcher taken in by the scheming princess.
How interesting that the same words have appeared in recent letters to The Age about Harry and Meghan’s compelling if rather uncomfortable documentary. Words like ″⁣manipulative″⁣, ″⁣melodramatic″⁣ , ″⁣entitled brats″⁣ confirm a repeating pattern as Charlotte Chiddell (Letters, 17/12) points out. It seems most are missing the points that the documentary makes about the misogyny and entrenched racism in British society. Perhaps the rot at the monarchy’s heart is finally being exposed and its irrelevance matched by its cruelty.

Acting for greater good
Market intervention: that’s what governments are for (″⁣PM backs intervention when free market fails″⁣, 17/12).
Democratic government values the ″⁣freedom″⁣ of many ahead of the freedom to manipulate markets in the interests of the few. The mark of a good government is confidence to act and ability to admit its mistakes; a bad government is afraid to act and risk mistakes.

Bearing fruit
Megan Backhouse highlights the challenge of finding carers for school veggie gardens over the holidays (″⁣Nurturing the joys of growing″⁣, 16/12). In my local area a kitchen garden at the ″⁣special school″⁣ has been in place for many years.
The community are often silent in support of kids’ activities, but given half a chance many would welcome the opportunity to be invited in to offer a helping hand over the holidays.
A greater school-community link could develop into a fruitful and rewarding time for all.

It’s good news week
The good news just keeps coming. Anthony Albanese stands up to gas corporations, councils will no longer be forced to have citizenship ceremonies on invasion day and Mark Dreyfus cleans out the Administrative Appeals Tribunal.

No claps for Thunder
Sydney Thunder all out for 15. Why am I not going to watch the 61 matches of the BBL?