A whole family has embraced body building – including a mother who became a world champion in just 18 months of training and her 11-year-old son who she calls ‘the new Arnie’.

Mother-of-four Kerry MacDonald, 43, from Workington, Cumbria, only set foot in a gym for the first time in April 2021 but has since won multiple competitions.

Her youngest son, Aaron, 11, has become an avid fan and although he hasn’t yet started doing weight training, he loves posing on stage in tiny trunks.

Her oolder son Oliver, 14, likes working out a few times a week while dad Steven Johnston, 47, has been doing it for years. 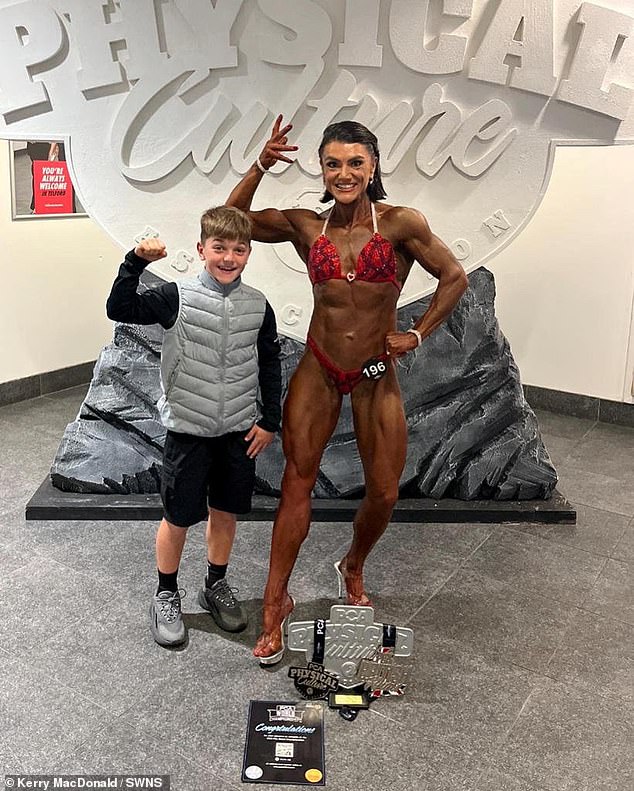 Kerry, pictured at a competition with her son Aaron, has only been body building for 18 months but has already won numerous trophies and awards

Kerry, who works as a cleaner, was diagnosed with ADHD a month after she began doing weight training and said it helps her focus.

She said having the support of her family and making them proud is the best part, as well as having shared interest.

Kerry said: ‘After lockdown I joined the gym and that was it, I’ve got a good physique for it.

‘I’ve always been a very active mother but I haven’t done athletics since being 13.

‘For years I couldn’t ever complete anything, I started hairdresser training and left because I couldn’t retain information.

‘I could do the practical stuff, but I never gained any qualifications. 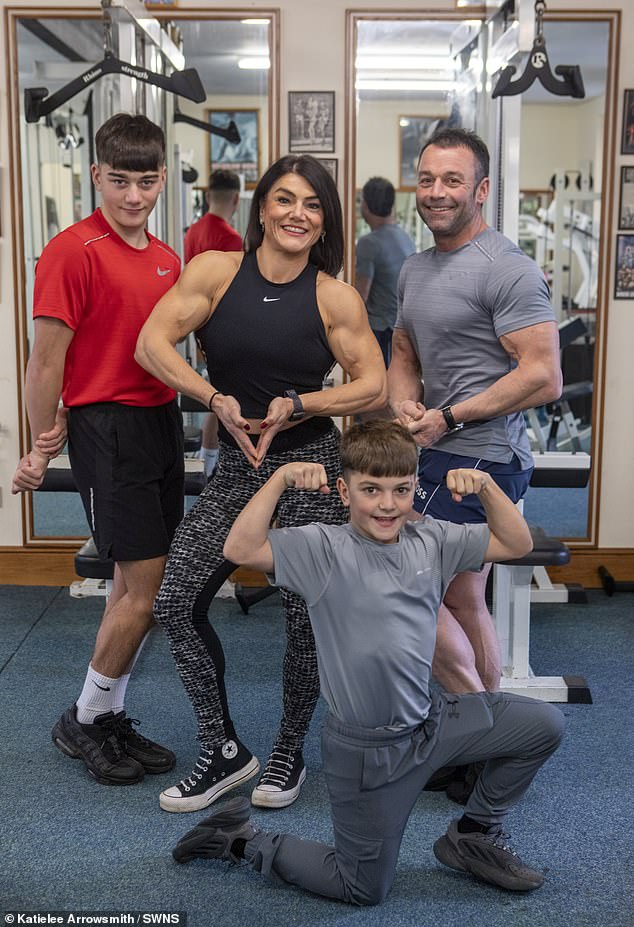 The family of four – including mother Kerry, dad Steven and sons Oliver and Aaron, all spend time down the gym 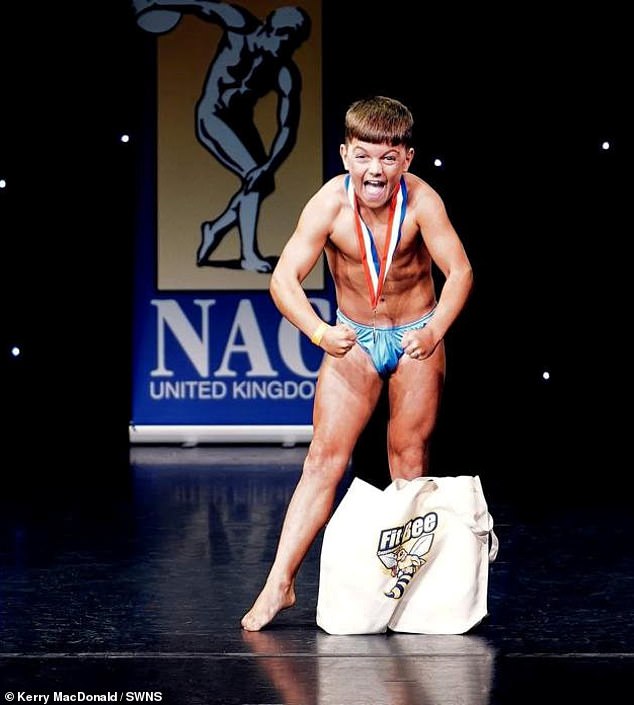 Aaron, 11, has become an avid fan of bodybuilding and although he hasn’t yet started doing weight training, he loves posing on stage in tiny trunks.

‘With ADHD you are grieving for what you could have achieved, but the gym really helps me.

‘I think my story shows anybody can achieve anything, just give it a go.

‘That feeling of being proud of yourself is such a nice feeling.

‘Having your family be proud of you is much nicer than any world championship or glam stuff.’

Steven first urged Kerry to try bodybuilding when the couple first started going out 18 years ago, but she was too shy.

But after recently committing to it, she rapidly racked up multiple trophies and tiaras, winning the women’s trained body category at the PCA bodybuilding world championships in November. 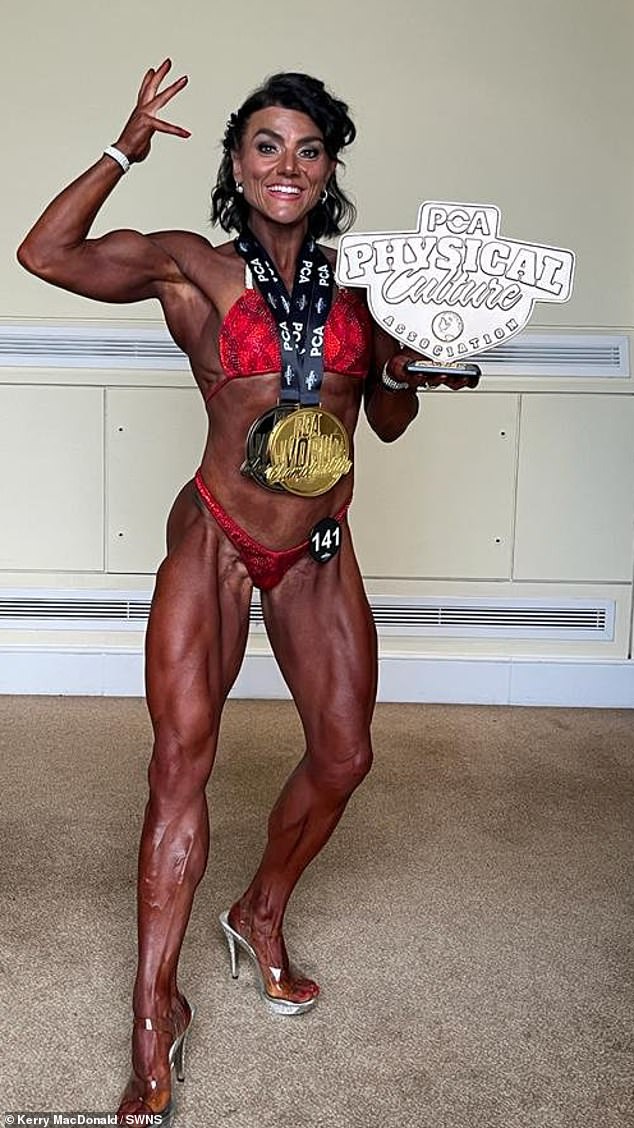 Kerry posing with one of her awards. She says her gym work helps her to focus with her ADHD condition 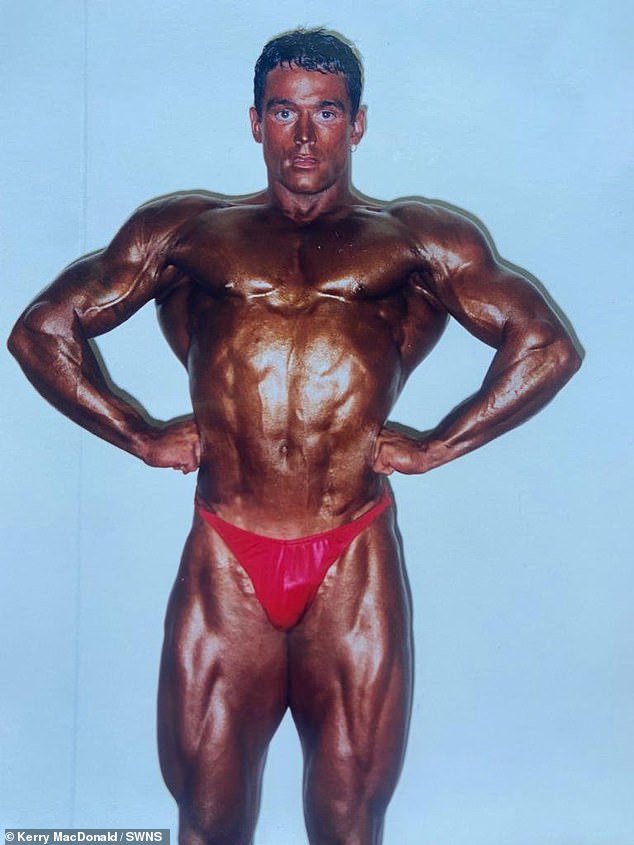 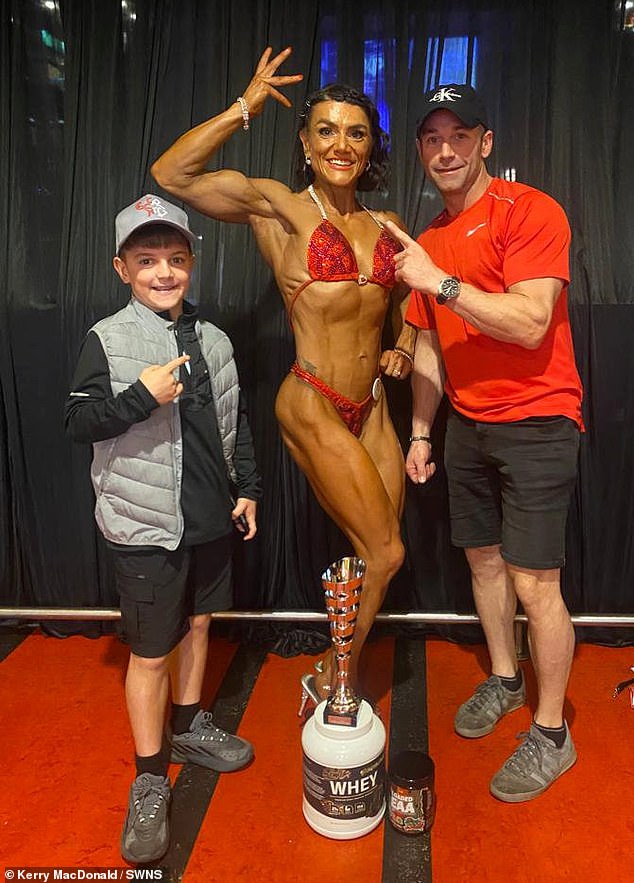 The whole family is now into body building, including Kerry and Steven and 11 year old Aaron (pictured)

Steven keeps her training regime on the rails and gives Kerry encouragement, but she was inspired by to take it up by a pal who won Miss Cumbria and also has a coach.

She added: ‘Me and Steven have been together 18 years and it has rekindled our relationship, because we go to the gym together, we eat together, we plan the shows together.

‘It annoys me that people assume I’m on steroids, I go to the gym four or five times a week, I eat clean – people just make their own assumptions.

‘I’m just naturally built to do this, I’m a genetic freak.

‘This is just the way that my body has responded to the exercise, the food, and rest.’

Kerry has inspired her sons to get involved. 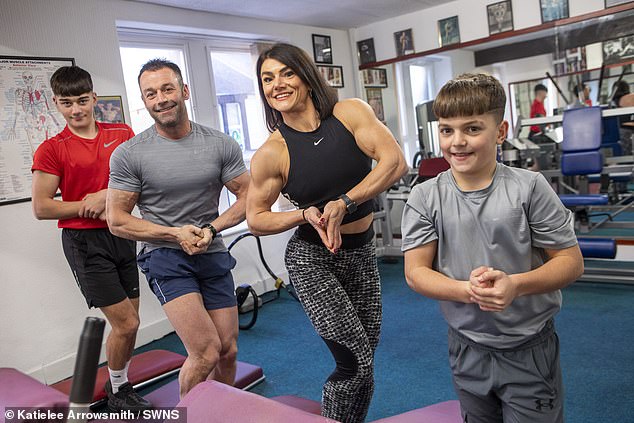 The family regularly spend time down the gym together lifting weights, with Kerry saying it helps her ADHD

While Oliver is mildly interested, Aaron has become obsessed with the bodybuilding community and loves to chat to other competitors, and spotting who he thinks will win.

He has been offered a sponsorship deal by a woman who makes Kerry’s bikinis.

And although his parents think he is too young to start training, he still loves to copy the poses and even got himself a tan and trunks to go on stage, with no encouragement.

Kerry said: ‘Just a few weeks ago he got up on stage and performed a bodybuilding routine.

‘He got a tan and trunks. He was getting the crowd going and they were cheering.

‘You can’t make kids do that. 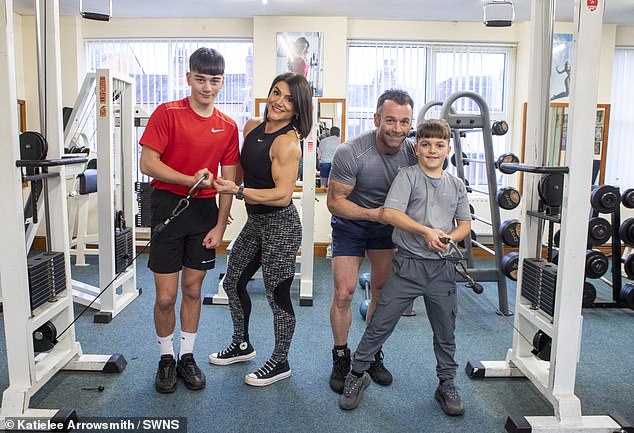 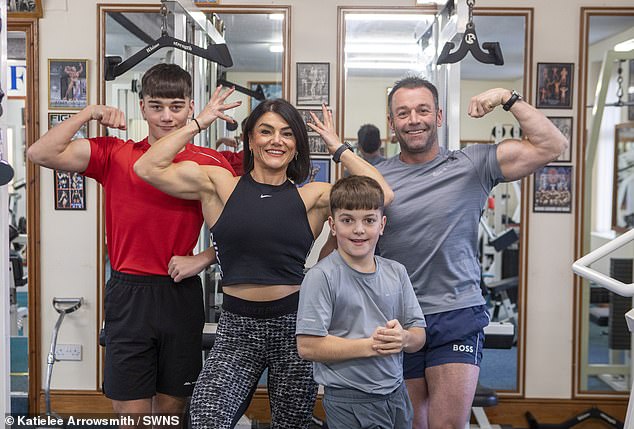 ‘Steven did it years ago so we had the photos around the house and Aaron used to look at the photos and copy the poses.

‘My youngest hasn’t missed a show. He was saying “I want to travel around the world with you”.

‘He goes round speaking to the bodybuilders, he sent one a message saying “you weren’t looking your best, you would have won if you’d looked like you did at another competition”.

‘The guy sent him a message back saying, “you’ve inspired me”.

‘I’ve got a bikini maker who has offered to sponsor him, he probably will do bodybuilding in future.

She added that Aaron had ‘really benefited from the shows’.

She said: ‘Aaron has really benefited from the people he has met, he’s got so much confidence.

‘It’s family time for us, we travel around going to shows. 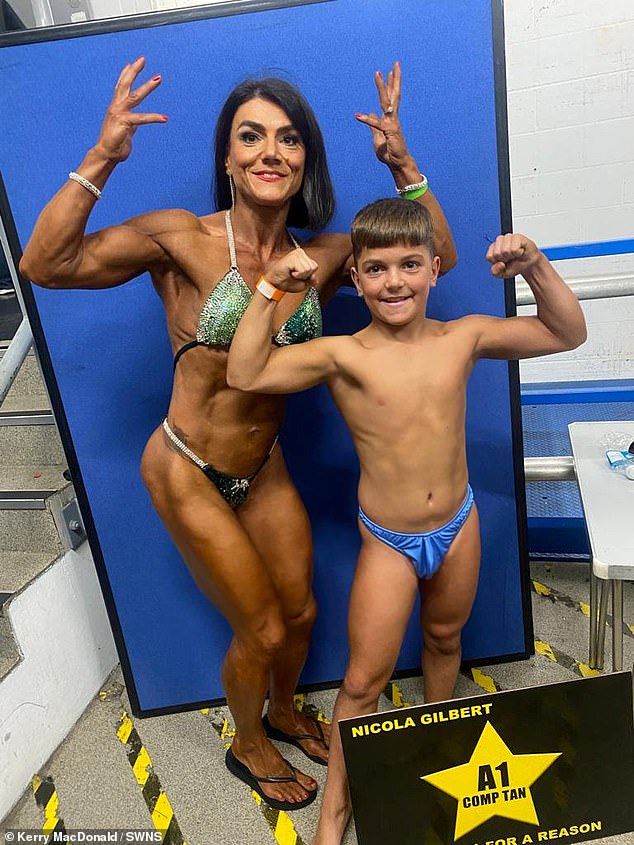 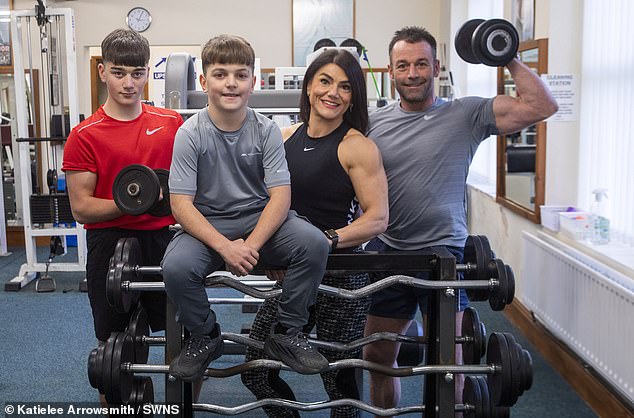 Kerry and her family train at a gym in Workington, Cumbria, a short walk from her home, and she says it’s a ‘passion’ for them 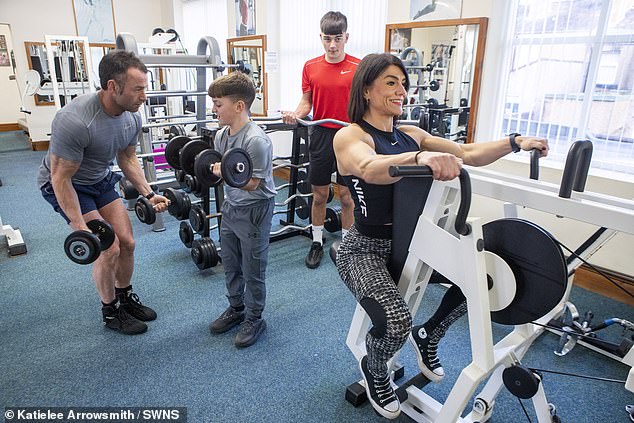 ‘It’s not for financial gain, it’s a passion and we are enjoying doing it as a family.’

Kerry and her family train at a gym in Workington, Cumbria, a short walk from her home.

‘It’s helped me a lot mentally.

‘I got four regional title wins in 10 weeks, a British title, gold, silver and World title.

‘I’ve got trophies and tiaras.

‘It seems impossible to do it in such a short space of time.

‘I know there are some men who wouldn’t want their wife posing in a bikini, but Steven loves it.

‘I can hear him shouting “keep it tight”. He doesn’t let me give in.’

The family also has two daughters, but they are not interested in the gym.

Bikini-loving grandmother, 70, reveals she feels better now than she did in her 20s after taking up bodybuilding following back surgery