My child’s primary school is a run-of-the mill suburban public school. It has a vibrant community, committed teachers, and the principal is a brilliant role model for teachers and students alike.

Like most public schools, it does a lot with very little funding, so we’re always scraping together fundraising efforts; cake bakes, fetes, sausage sizzles, trivia nights – nothing groundbreaking. 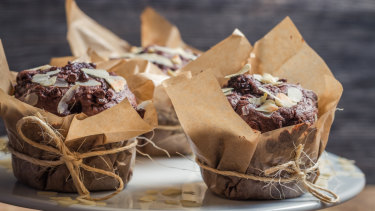 Many schools depend on endless hours of volunteering from parents to keep the bake sales and all the other fundraisers going. Let’s invite more dads to the party. Credit:Shutterstock

But here’s the thing: the weight of this fundraising tends to fall mainly on one group of parents, something that stood out at the Mother's Day last month.

Each Mother’s Day, the school runs a stall for kids to buy small gifts for their special person (whoever that may be, not always a mother). The school puts out the call for parents to make, bake, craft, and plant things which can be sold at the stall.

It’s a real money spinner, a lovely way to bring school together, and it gives kids a chance to buy something nice for a couple of gold coins.

Parent volunteers are charged with organising rosters, coordinating donations, pricing, setting up and packing up, and staffing the stall.

I get involved by making plant-type things and jewellery-type things, and this year I took some time off my paid job to staff the stall with other parents.

But I’m feeling jaded. Last Mother’s Day there were 16 volunteer parents, one of whom was a dad. Of the 500 or so items donated, about 25 were donated by dads (the things the dads contributed were beautiful, I might add).

It felt particularly ironic on Mother’s Day that it was the mums who carried the load of making this shindig come together. Rather than celebrating mum’s special day, it felt more like adding to the unpaid domestic labour of women.

I did a quick calculation. If each donated item at the stall took 10-15 minutes to make, and you add the time involved in coordinating and staffing the stall, for the money raised, every person put in about $11 per hour worth of work.

Below minimum wage, but that’s okay: The money goes to the school, which is what community is about, right? Working together for a common goal, sometimes to one’s own sacrifice?

But where were our wonderful dads? I’m not knocking them; they are some of the most progressive, generous people I’ve had the pleasure to meet.

Dads are well represented on our school council. There’s good representation of dads at working bees.

But their absence in these fundraising efforts reinforces the idea that there is men’s work, and then there is women’s work. That fundraising is something women do: the CWA, "ladies who lunch".

Some people have suggested to me that the disparity is because men are more likely to be working, so don’t have time to be involved in school activities.

Firstly: all parents are "working". But, beyond semantics, this argument presumes women aren’t in paid work, or are in paid work that is less important. Among the mums volunteering at the Mother’s Day stall were a lawyer, a physicist, a midwife and a journalist.

There’s also the inference that, if women are working part-time, mum’s unpaid days are just "spare time". It devalues the huge amount of unpaid work women do in the home, raising younger children and managing the family’s life admin.

And let’s not forget that getting involved with school isn’t limited to just during school hours. Every mum knows well the experience of staying up to bake that cake, sew that costume, paint that thing, fill out that form.

This week we put out the call to the school’s dads to see who wanted to coordinate the Father’s day stall. The response? Crickets.

I asked friends from other schools what their experience was, and they said it was overwhelmingly similar.

However, there were some small glimmers of progress. One school I am aware of has a Mother’s Day stall coordinated only by men. There’s a kinder bake sale where each treat is labelled to indicate if it was made by a dad.

Another school I know of considered communicating what proportion of its fundraising efforts came from women. They thought it might illustrate the disproportionate effort and incentivise a rebalance, but they didn’t want to incite a gender war.

And neither do I.

I don’t think this is about taking aim at dads, nor is it useful to do men’s thinking for them. It's about pointing out the problem and asking men how they think they can be involved in finding a solution.

What is that solution? I don’t know. Maybe dads have some ideas. But I think it’s a conversation schools and wider community should have, because it’s about so much more than school fundraising.