You can’t blame the Turks. Let’s face it, if your enemy insists on yelling a word, then you start to imagine that word’s important, a god perhaps, summoned for protection. And these Australians were obviously a pious bunch, devoted to four deities that all began with B: Bastard, Bugger, Bloody and Bullshit.

The Gallipoli story is a likely furphy, but the language isn’t. Joseph Beeston, a medic serving in the Dardanelles, said "profanity oozes from the Australian Tommy like music from a barrel organ". A digger would hardly enter the fray without his Enfield rifle and a swag of B-bombs. 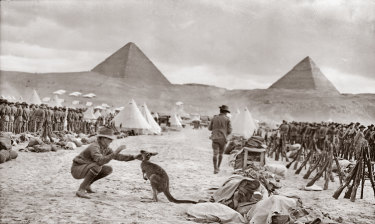 World War 1 diggers, like those pictured here with their kangaroo mascot in Egypt, were known for their colourful language.Credit:New Holland Publishers /AWM

Stories in the period’s Anzac magazine, Kia-Ora Cooee, bristle with blazes, blooming and blasted: the prim translations of those battlefield hollers. Clearly no soldier’s sentence felt complete without an added two-syllable beat for extra colour.

In search of such colour, Amanda Laugesen toured our history, examining why salty words infuse this nation’s identity. The upshot is Rooted – An Australian History of Bad Language (NewSouth, 2020). As historian, and chief editor of the Australian National Dictionary Centre, Laugesen is bloody well qualified for the task.

On top of diggers – both gold and wartime – the other vocation to excel in expletives is the colony’s bullock-driver. Bullockese, in fact, was one gazette’s way of alluding to the filth a hauler might aim at his oxen. In 1847, one English tourist – a gent named Alexander Marjoribanks– crunched the numbers to claim a bullocky would utter "this disgusting word" no less than 18.2 million times in his lifetime.

To clarify, that disgusting word is bloody, what Marjoribanks labelled the great Australian adjective. Back in 1788, the same term earned 150 lashes for convict Samuel Barsby. In part at least, since when Barsby described some marines as ‘bloody buggers’, the noun may have carried a greater offence than the adjective. It’s hard to say.

Alexander Harris, another early visitor, likened Sydney to "St Giles and Wapping in one", where neither London district was noted for its oratory. Indeed, Laugesen views Port Jackson’s own tenuous beginnings as critical, where “language considered insolent and challenging to authority could threaten the community’s stability".

Hence a bloke named Matthew Adey was punished for calling his mistress a grumbler. That’s right – not a b-word to be seen. Still, Adey received 10 days on the treadmill, the very ordeal that modern Sydneysiders pay good money to undergo.

Colonial women were no less active, crudely speaking. Eliza Smith and Mary Lugg, a pair of neighbours, sizzled the air with "the most obscene and blasphemous language", according to Launceston’s Cornwall Chronicle in 1849, where one combatant took to using a "speaking trumpet" to underscore her point.

Rooted is a riot of such clashes, where every flashpoint – from fence feuds to Gallipoli, from racial taboos to Puberty Blues – charts the shift of acceptability. As we enter the 1970s, a decade energised by women’s lib and Don’s Party, the Anzac pantheon is fast transplanted by the Big Six, as former Herald columnist Ruth Wajnryb dubbed those familiar four-letter words. To help you guess that set, think anatomy (3), excretion (2) one f-fornication.

With seldom a blush, that same vulgar bunch crops up in film, lyric and Gordon Ramsay’s kitchen. As a genre, reality TV is a reliable arsenal of f-bombs and every other cuss, with Laugesen haunting chatrooms to deduce how that trend exhibits its own local signature.

Whether it’s our convict past, or outsider status, Australia continues to revel in rude speech. Hansard has it; ad slogans push it. Fair to say, if those bullockies and lash-victims were alive today, they’d probably feel both proud and bewildered. Plus a little WTF.