It's apt that "upon a time" is missing from the title, because Once is a timeless fairytale of some dreams coming true and others withering.

John Carney's 2007 film ruthlessly stripped away any sentimentality, thereby making achingly real the tale of love thwarted and musical ambitions fulfilled. It was also a film about the music scene made by someone who understood it. 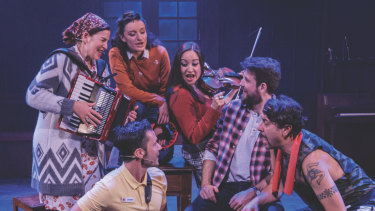 Once is a timeless fairytale of some dreams coming true and others withering.Credit:Robert Catto

The songs of Marketa Irglova and the brilliant Glen Hansard still underpin Once as a stage musical, here having its Sydney premiere for Darlinghurst Theatre Company. Enda Walsh's book shadows Carney's screenplay, while adding and amplifying a few characters.

Casting must have been a challenge, because all 11 actor-singers also play instruments, with musical director Victoria Falconer (also portraying Reza) effortlessly flitting between half a dozen.

The songs exist because the story is about making music, but they also occasionally flirt with relevance to the plot, which concerns Guy (Tony Francis) meeting Girl (Stefanie Caccamo) while busking. He's a Dubliner in Dublin; she's a bounced Czech who's washed up on the Liffey's banks with her baby daughter and mother (Joanna Weinberg).

As Guy later remarks, "She is the ambassador for honesty," and her blunt approach to life both galvanises Guy out of a stupor of mistrusting his musical gift, and dampens a latent affair.

Alas, Walsh and the production deviate from Carney in allowing sentimentality to trickle into some scenes between Guy and Girl, and Guy and Da (Cameron Daddo). And while Francis imbues Guy with boyish charm, he struggles to torch Hansard's potent songs of lost love with the requisite conviction.

Possessing a striking voice, he tries to manufacture this conviction, rather than letting it well organically from the taut lyrics. Perhaps his musical theatre background impedes him in this, and his Irish accent wanders when he sings.

Caccamo nails Girl's feistiness, drive, integrity and light-switch changes from severity to playfulness. Her one lapse comes in her overwrought delivery of The Hill, and even that is largely a flaw of the song.

Needless caricaturing of some roles for cheap laughs pushes us away, although Hugh O'Connor's welcoming pub-based set helps pull us back.

Falconer, director Richard Carroll and movement director Amy Campbell have ensured ensemble energy is a watchword in a production that may lift further if Francis jettisons acting the songs, and lives them.