The WA boss of One Nation has rebutted comments from founder Pauline Hanson claiming the party was struggling to find candidates for the upcoming state election.

Speaking to Radio 6PR on Monday, Ms Hanson said the party would field upper house candidates but was finding it "extremely hard" to get good candidates for lower house seats. 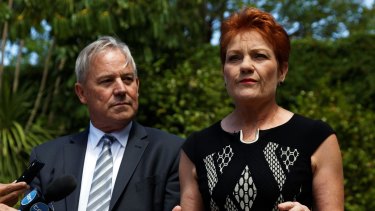 One Nation upper house member and WA leader Colin Tincknell said up until a month ago the party was struggling, but now had enough for a showing in targeted lower house seats.

He said the party would not fill every seat, but was better prepared than the 2017 election when it attracted 4.9 per cent of the primary vote.

“We strategically go about it, as every political party would, you work out the areas where you want your candidates and where you don’t need them and that’s what we’ve done,” Mr Tincknell said.

“We’ve got a strategic plan to do it properly, not rush it like last time and not try and be in every seat. That’s not our aim, we’re not a major party and we’re not about to win government.”

One Nation disendorsed two candidates ahead of the 2017 WA election amid controversy over its preference deal with the Liberal Party.

Ms Hanson told 6PR she would not visit WA ahead of the March election and was unfazed by the Liberal Party's decision to rule out any preference deal this year.

“Four years ago we didn’t have a party in WA, Pauline was the only member we had so she ran it … [but] it’s not the case anymore.

“The WA party does it on its own and preference deals and all of that.”

WA Premier Mark McGowan said Labor would place One Nation last on its 'how to vote' cards and challenged the Liberals to do the same.

The preference deal with the Liberals was important for One Nation in the 2017 election and helped elect three candidates to the upper house.

Mr Tincknell said he had no issue with being last on Labor’s how to vote card.

“We really don’t care what Mark says and where he puts us because we know where we will be putting him and the Greens, they will be last,” he said. 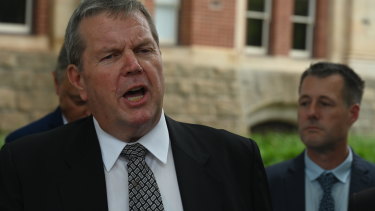 WAxit leader Russell Sewell and members of the party at its 2021 election launch in Northbridge.Credit:Peter de Kruijff

“We’re a conservative party so of course we’re going to be putting the socialists last. It goes without saying.”

The WA election is on track to have a record number of parties registered with the WAxit party launching its election campaign on Tuesday.

WAxit hopes to take advantage of the wave of parochialism swirling WA due to the success of the state's hard borders.

Party leader Russell Sewell, who previously ran for Clive Palmer's United Australia Party, said the WAxit would advocate for secession from the rest of the country and to broaden the economy away from just agriculture and mining.

“The idea would be to get some upper house seats to be able to apply pressure to the government and bring on a referendum to let the people of Western Australia to actually decide,” he said.

Mr Sewell ruled out any association with Mr Palmer or his party.