Asset bubbles bursting, IT infrastructure breaking down, price instability and debt crises loom in the next five years as the coronavirus pandemic leaves behind a "lost generation" of young people facing an increasingly precarious future.

These are the stand-out mid-term warnings in the World Economic Forum’s Global Risks Report 2021, which rings the alarm over issues as widespread as weapons of mass destruction and the lack of progress on long-term problems such as climate change. 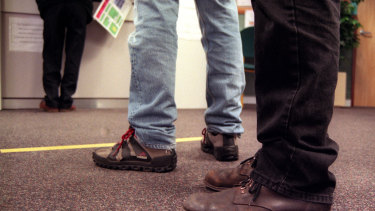 One of the major immediate risks identified in the report was damage to social cohesion due to a “lost generation” of young people whose work lives were threatened by the economic downturn and a digital divide.Credit:Virginia Star

The forum's report had warned about the risk of a pandemic since 2006, World Economic Forum managing director Saadia Zahidi said in a statement, urging global governments to consider the raft of threats experts say face the world in a matter of years.

"We know how difficult it is for governments, business and other stakeholders to address
such long-term risks, but the lesson here is for all of us to recognise that ignoring them doesn’t make them less likely to happen," Ms Zahidi said.

"As governments, businesses and societies begin to emerge from the pandemic, they must now urgently shape new economic and social systems that improve our collective resilience and capacity to respond to shocks while reducing inequality, improving health and protecting the planet."

Expert respondents to the forum's survey rated "state collapse" and "multilateralism collapse" among the potential threats they were concerned about by the end of the decade.

In the next 10 years, climate action failure, extreme weather and human-led environmental damage were considered serious threats. Digital power concentration, digital inequality and a failure of cyber security were also high on the list of concerns.

However, in the next two years, infectious diseases and livelihood crises due to the coronavirus pandemic were top of mind, followed by extreme weather events.

"Responses to the pandemic have caused new domestic and geopolitical tensions that threaten stability," says the report released on Tuesday evening.

One of the major immediate risks was damage to social cohesion due to a "lost generation" of young people whose work lives were threatened by the economic downturn and a digital divide. This could lead to growing geopolitical fragmentation and global economic fragility.

Intergenerational inequality is a recurrent theme in the report, with the coronavirus pandemic expected to have hit young people particularly hard.

"'Pandemials' are at risk of becoming the double lost generation of the 21st century," the report says. "Lack of opportunities for future economic, societal and political participation could have long-lasting global consequences."

The proportion of young people is expected to rise in Africa, but Oceania, Europe and South-East Asia are expected to see the average age of their populations continue to rise by 2050, leading to demographic challenges around unemployment and ageing.

Australia has escaped the worst effects of the coronavirus pandemic, with a Deloitte report on Monday saying it was now one of the best places to be globally. Due to closed borders, the nation will have 550,000 fewer people in 2022 than it would have had without the virus, prompting economists to encourage the government to attract young skilled migrants.

One of the long-term issues facing all nations, regardless of their handling of the pandemic, is climate change.

The WEF report warned the pandemic and the focus on the recovery required, could affect progress in this area and there was "no vaccine for environmental degradation".

"The delayed UN Climate Change Conference COP26 in November will be a pivotal moment for the world’s largest emitters to commit to more aggressive national targets and agree on rules for carbon trading … that can accelerate investments in the transition to a low-carbon global economy," the report says.

Get our Coronavirus Update newsletter

Stay across the news you need to know related to the pandemic. Sent Monday and Thursday. Sign up here.