Former operatic baritone Lyndon Terracini never keeps tickets from the productions in which he has been involved. But one is so historic he plans to frame it.

It was the second night of Attila, the little-performed Verdi classic staged in Australia only because of the agreement forged with Milan’s legendary opera house La Scala.

“I was sitting in G25. We did two performances then we were kicked out of the Opera House,” Terracini says. “That night Australia went into COVID lockdown.” 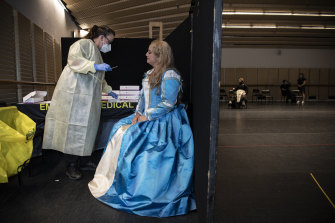 Figures vary, but the direct cost to the arts industry was at least 60,000 jobs lost and a $50 billion hole in the national economy.

Fast forward a year, and Opera Australia will unveil its second “forgotten” – which usually means “too expensive to stage in Australia” – Verdi masterpiece with La Scala on Tuesday.

This time, for Ernani, premiering at the Sydney Opera House, audiences will be as safe as they can be anywhere in the world. 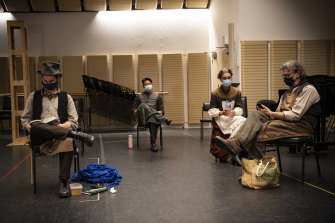 Backstage this week, ahead of a final rehearsal, the members of the 100-strong cast, chorus and orchestra, lined up to be COVID tested.

“Look, it’s not the most enjoyable experience,” lead soprano Natalie Aroyan said. “But it’s very quick and a small price to pay to return to the stage and bring opera.”

And the need for stringent health restrictions is particularly high for opera, which involves no shortage of spittle. An academic paper published by Oxford University Press in August confirmed that COVID is likely spread by small airbourne droplets in any choir performance. And Ernani has a chorus of 60 singers, in addition to principals such as Aroyan.

Terracini said he believed Opera Australia was the first major opera company in the world to use rapid antigen testing, which delivers results in 15 minutes.

Sydney epidemiologist Dr Henning Liljeqvist said it’s a quicker, cheaper way of testing for COVID than the PCR (polymerase chain reaction) tests many of us have undergone in Australia.

Dr Liljeqvist said PCR remains “the gold standard” but it has drawbacks: taking up to 48 hours to report, involving expensive laboratories, and so sensitive it records “false positives”.

Rapid antigen testing can be done at any worksite, involves a device the size of a credit card and is slightly better at picking up asymptomatic or “false negative” cases.

The scientist said the two tests should be seen as co-stars, not competing divas. 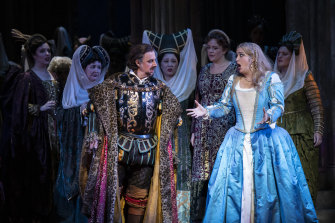 A rehearsal for Ernani which starts at the Sydney Opera House next week.Credit:Wolter Peeters

A pilot program, during the Christmas/New Year lockdown on the Northern Beaches, quietly ran at the Joan Sutherland Performing Arts Centre in Penrith as part of a two week season of The Merry Widow.

Ever since, each Opera Australia performer – no matter how grand or junior – has undergone rapid antigen testing every three days before reporting to rehearsals. That’s in addition to any PCR tests they need to take as a member of their local community.

Other applications for Rapid antigen testing? “The airlines,” Dr Liljeqvist said. “Testing passengers before they board international flights would add to safety aboard. And test them again at arrival.”

If you’re lucky enough to see Ernani, remember this. It’s not over until the COVID-free lady sings.