A deal to purchase 51 million doses of the University of Queensland’s coronavirus vaccine has been terminated by the government after the vaccine trials returned false positive HIV results.

Australia will now focus on manufacturing the British-developed AstraZeneca-Oxford University vaccine, and buying in other leading global candidates. 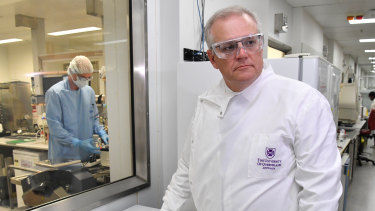 Prime Minister Scott Morrison during a tour of the University of Queensland Vaccine Lab in October, before the government ended its collaboration.Credit:AAP

The Brisbane based vaccine team revealed that in past weeks pathology tests had confirmed the positives were in fact false and the health of the participants had not been put at risk.

Biotech giant CSL and the government agreed the UQ vaccine’s development would not proceed to the next stage after expert medical advice found major changes would be needed to well-established HIV testing procedures to accommodate any vaccine rollout.

In this episode, national editor Tory Maguire and national affairs editor Rob Harris talk about what went wrong with the UQ vaccine trial, how the decision was made to pull government funding and what's next for Australia's COVID-19 vaccination program.

Our supporters power our newsrooms and are critical for the sustainability of news coverage.

Becoming a subscriber also gets you exclusive behind-the-scenes content and invitations to special events. Click on the links to subscribe to The Sydney Morning Herald or The Age.