A faster recovery in the federal deficit has given Prime Minister Scott Morrison more room to move in cutting taxes ahead of the next election as the government vows to use budget measures to boost job creation and put upward pressure on wages.

The swift rebound is tipped to add $103 billion to the budget bottom line over the next four years, building a case inside the government for more generous tax cuts in early 2022 to improve household incomes when inflation is on the rise. 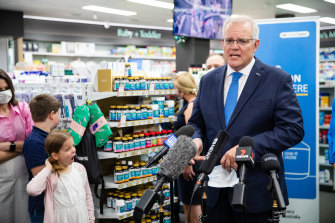 Treasurer Josh Frydenberg said the budget priorities would be to boost job creation while encouraging stronger wage growth as the unemployment rate fell to record lows.

“Fiscal discipline is key, and the key for us is to ensure that we’re spending in the areas that are going to drive job creation and boost productivity,” he said.

“And so we’ve got a very, very clear focus on where our spending priorities are.”

The improvement since the May budget is expected to be revealed in the mid-year economic update this Thursday, with Deloitte Access Economics estimating a gain of $103 billion from a rebound in activity and tax revenue since the winter COVID-19 lockdowns.

But Deloitte Access Economics director Chris Richardson said voters should treat new tax and spending promises with caution because the “remarkable” recovery was still not enough to bring the budget back to health.

“A range of commissions and reports indicate that Australian government spending is still in catch-up mode for aged care, disability and mental health,” he said.

“And at the same time the world has become more dangerous for Australia, so defence costs have some catch-up ahead too.

“That says the budget will be under pressure for some years to come. If you’re hearing costly promises from politicians in the months ahead, they should be treated with considerable caution.”

The Coalition has promised to keep federal tax receipts below 23.9 per cent of gross domestic product but might exceed the cap if revenue continues to recover strongly, adding to the case within the government for another round of tax cuts.

The Coalition made a separate promise as recently as May 2017 to allow increases in revenue forecasts to be “banked as an improvement to the budget bottom line” but it dropped this in May 2018, when it promised generous tax cuts over a decade on the assumption of future revenue growth.

Rather than rising steadily as forecast, federal revenue fell in absolute terms.

A key test for the government is the fate of a tax offset for about 10 million workers that is worth up to $1080 per year but is due to end next financial year after being extended in the May budget at a cost of about $7.5 billion.

The low and middle income tax offset, or LMITO, will have to be extended again, or replaced by other tax benefits, if the government is to avoid an argument at the election over an effective tax increase.

Labor Treasury spokesman Jim Chalmers has signalled plans to address the tax offset in an election fight over the cost of living, saying households were suffering from rising petrol prices, declining real wages and an effective tax hike after the election.

“I think the most important reason why working families right across Australia are falling behind is because their wages have been stagnant for much of this decade,” Mr Chalmers said last week.

Labor has signalled it will offer tax relief to workers on lower incomes and expects the government to extend the LMITO in the May budget.

The federal deficits from July 2021 to June 2025 were forecast to be worth $342 billion in the May budget but Deloittes forecasts $239 billion instead, mostly from “rapid repair” in the economy.

Treasury forecast a deficit for this financial year of $106.6 billion but the new Deloitte calculation puts it at $91.1 billion.

The last budget surplus was in the year to June 2008 and forecasts have veered wildly in the years since while the actual deficits have reached a cumulative total of $580.5 billion, not including the forecast for this year. The smallest deficit was $690 million in fiscal 2019.

Mr Frydenberg told The Sydney Morning Herald and The Age that the government would apply “fiscal discipline” in the recovery from the pandemic after injecting about $300 billion into households and businesses through measures like JobKeeper.

“It is important to try to rebuild those fiscal buffers and we want to do so in a way that is consistent with our core values,” he said.

“And that is obviously about controlling expenditure growth, ensuring the efficiency and the quality of government spending, delivering your essential services.

“And with respect to driving revenue growth, maintaining the tax to GDP cap at 23.9 per cent or below. So that’s where our focus will be.”

Higher inflation is challenging the government’s economic message, however, because it means households are seeing consumer prices outpace wage increases.

The government is relying on a tighter labour market to put upward pressure on wages.

“This year, we’ve seen inflation creep up, which has impacted upon real wages, but the key to driving higher wages is going to be a tighter labour market,” Mr Frydenberg said.