RICHARD LITTLEJOHN: Nurseries are replacing the naughty step with a ‘thinking cloud’ cushion. Maybe they should whack the kids with it instead

When I was three, I was enrolled in a nursery school run by a formidable middle-aged woman called Mrs Pritchard.

There were maybe a dozen pre-school boys and girls in the class, which occupied the front room of her home round the corner from our house in Shenfield, Essex.

It was more than just a glorified child-minding service. Mrs Pritchard was a retired teacher who took her responsibilities seriously and was pretty strict.

She may not have ruled with the proverbial rod of iron, but she didn’t put up with any nonsense.

Although lessons were fun, lots of modelling with Plasticine and such, she did her best to prepare us for education proper.

Mrs Pritchard was big on drama and made all her own props, meticulously fashioning balsa wood swords and cardboard armour for a play about King Arthur and his knights. 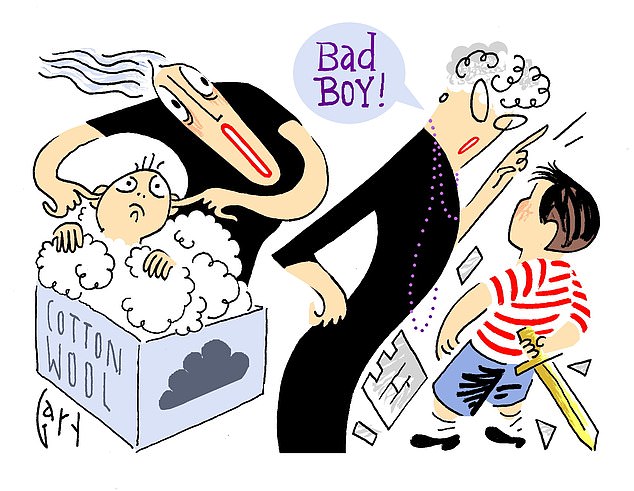 The modern ‘child-centric’ approach seems to have bred a generation of semi-savages, oblivious to the sensibilities of those around them, says Richard Littlejohn

Unfortunately, young Littlejohn and another boy went at rehearsals a little too enthusiastically. We smashed the set to smithereens, the cardboard castle was reduced to ruins and all that was left of our swords were the handles.

Mrs P made her displeasure abundantly clear, both to me and the other kid. She read us the riot act and made us clear up the mess we’d created.

After we’d done that, we were sent out to sit in silence on the stairs and reflect on the error of our ways.

On another occasion, I was given a note to hand to my mother when she came to collect me at lunchtime.

Mrs Pritchard requested that Mum ceased including a bottle of orange squash in my packed elevenses because, after drinking it, I insisted on burping loudly and repeatedly, in an undesirable and frankly disreputable attempt to amuse the rest of the class.

(Some might conclude that this was the perfect preparation for a future career as a newspaper columnist.)

Mrs P was adamant. I was a disruptive influence and any further repetition would result in my permanent exclusion.

Why am I telling you this now? It’s because in a desperate search for something, anything, to write about which doesn’t involve Brexit or the Tory leadership contest, I stumbled across the story about nursery schools banning the use of the word ‘naughty’.

According to Danielle Butler, who runs a string of nurseries in the Midlands: ‘The term ‘naughty’ is one that has held negative connotations, particularly in an Early Years context.’ Children should not be banished to the ‘naughty step’ as punishment for bad behaviour. If you label a child ‘naughty’, it can become ‘self-perpetuating’ and harm their self-esteem. Scarred for life, I shouldn’t wonder.

Instead, nursery staff should take unruly children to one side and reason with them. One nursery uses an Ikea cushion as a ‘thinking cloud’, whatever that is.

‘We avoid secluding or reprimanding children for undesired behaviour. If a child was throwing hard blocks in the classroom, we would help them identify the impact of their behaviour and they would be redirected to throwing bean bags in the throwing zone.’

That’s the same kind of woolly thinking which persuaded councils that if they provided dedicated walls for graffiti artists, they wouldn’t spray paint all over trains, bridges, bus shelters and any other flat surfaces which presented them with a blank canvas.

How’s that working out, then?

Is it any wonder that kids grow up not knowing right from wrong, or how to behave in public?

Look, I’m not advocating bringing back the birch. I don’t approve of any kind of corporal punishment, although I wouldn’t rule out giving a young hooligan a whack round the earhole with an Ikea ‘thinking cloud’.

Children need discipline in life. Too few of them seem to get much of that at home these days. The modern ‘child-centric’ approach seems to have bred a generation of semi-savages, oblivious to the sensibilities of those around them.

Make that second generation. The parents are just as bad, seemingly indifferent to the havoc their spoilt brats cause in public. Elsewhere in yesterday’s Mail was another story about pubs calling time on kids.

The landlord of the Hen & Chicken in Bristol has pinned up a poster insisting that children must sit quietly with their parents, or they’re not welcome.

He’s sick and tired of them ‘free roaming, running, scootering and climbing’ all over the shop, while their indifferent mums and dads sip their drinks in apparent ignorance. And so are his regulars. Amen to that.

There’s nothing worse than trying to have a quiet pint on the set of Lord Of The Flies. The same goes for restaurants.

Get a babysitter. Don’t drag children, some still in nappies, out for an evening meal in a decent restaurant. They don’t want to be there, and the rest of us don’t want them there, either.

The trouble is, too many modern parents treat their children as pets. They indulge them in the same way some soppy society birds indulge those ridiculous rat-sized dogs they carry round in their designer handbags.

None of this is the fault of the kids themselves. It’s down to adults, including those gormless nursery school ‘professionals’ who have convinced themselves that telling a child they are naughty will irreparably damage their precious self-esteem.

I may sound like a miserable old git, but it never did me any harm. And it can’t be any coincidence that 60-odd years later, I can still remember the wrath of Mrs Pritchard. What she would make of all this madness, I hate to think.

You wouldn’t let him indoors

Fans of the popular ITV police drama Heartbeat have this week been mourning actor William Simons, who has died aged 78.

But for me, and many others, his finest hour came in a cameo role in Minder. Simons played the insanitary Pongo Harris, purveyor of rancid butter pats and individual sachets of British Rail Travellers Fayre ‘confiture’. 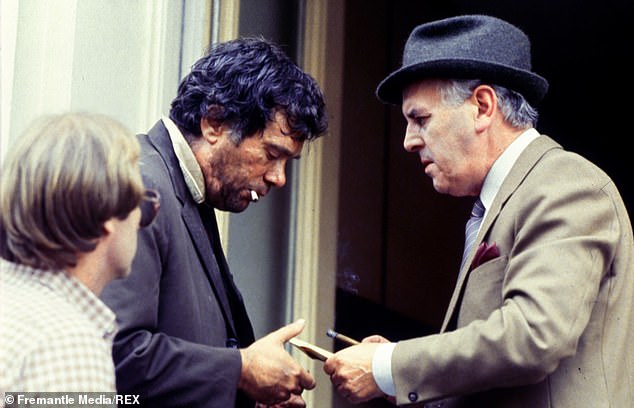 Fans of the popular ITV police drama Heartbeat have this week been mourning actor William Simons, who has died aged 78 (he is pictured second from left in Minder)

In the episode Willesden Suite, Pongo delivers a consignment of bog rolls to a hotel which Arthur has agreed to supply with an assortment of cut-price essentials. ‘Extra-length, four-ply, colours various,’ says Pongo, opening the rear doors of his rusting Transit.

‘Wouldn’t know, Terry,’ says Pongo. ‘I never use the stuff myself.’

Have you noticed how the climate alarmists keep ramping up the rhetoric? Not so long ago, they were banging on about ‘global warming’.

When the predicted increase in temperatures didn’t materialise, they changed tack to the more flexible ‘climate change’.

Since then, the language has become even more hysterical. They now talk about a ‘climate emergency’ and on the wireless yesterday I heard someone foaming at the mouth about ‘climate apartheid’.

Where do they go from here? As we were always told in Fleet Street, if every minor disagreement is described as a ‘war’, then what do you call an actual war?

Still, I don’t suppose that will stop the ecomentalists. Stand by for ‘climate holocaust’ and ‘climate genocide’, followed by ‘climate Armageddon’.

Or what we used to call ‘the weather’.

Thanks for all your emails about the alleged widespread use of cooking oil instead of sunscreen.

It took Anita Whelan back to her student days on Bournemouth beach in 1976, when her blonde friend believed someone who told her she’d get a deep tan if she smothered herself in lemon juice and olive oil. She spent several days in bed with second-degree burns. They had to keep her sheets in the fridge.

And as for my suggestion you might just as well fry your food in Ambre Solaire, Graham Ludlam once tried something like that, only with cod liver oil — thinking it was the healthy option.

‘The breakfast was inedible and the house stank like Grimsby fish docks for a fortnight,’ Graham tells me.

‘What’s the SPF factor of cod liver oil?’ he wonders. ‘That should clear the beach.’

Not a clue, guv, but give it a try. After all, it works for fish.