A quarantine-free travel bubble between Australia and Singapore could be established within the next week after Prime Minister Scott Morrison confirmed the two countries were in the final stages of concluding an agreement.

Australians may also be able to fly to Bangkok, Phuket, Johannesburg and Fiji before Christmas after Qantas and Jetstar announced they were restarting international flights out of Sydney ahead of schedule. 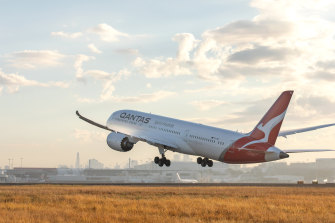 Qantas announced plans to restart more international flights out of Sydney by Christmas.

The Singapore arrangement will be similar to the travel bubble Australia established with the South Island of New Zealand this week. The talks are focused on allowing vaccinated students and business travellers to travel freely between Australia and Singapore as the first step, before opening up to tourists.

The travel bubble would be dependent on whether states relax their quarantine arrangements, but NSW and Victoria have already scrapped mandatory hotel quarantine for all vaccinated international arrivals from November 1.

Mr Morrison said on Friday morning the government was in the “final stages of concluding an arrangement with the Singapore government”.

“We anticipate that being able to be achieved within the next week or so, as we would open up to more visa class holders coming out of Singapore, we will see that occur.”

He said the arrangement would be open to states and territories that were open “in the same way as they are here in Sydney” and that it aligned with the timetable Qantas has announced for its flights to and from Singapore.

Qantas and Jetstar announced on Friday morning they are bringing forward the restart of their international flights, with Australian-based employees to return to work in early December.

Flights will restart out of Sydney to Singapore, Bangkok, Phuket Johannesburg and Fiji earlier than expected.

Singapore Prime Minister Lee Hsieng Loong said he was “delighted to hear that Australia will be allowing entry to visa holders from Singapore”.

“I had encouraged [Morrison] to do so when he visited Singapore in June,” Lee said.

“Singapore and Australia have robust economic and investment links, and warm people-to-people ties. Look forward to resuming close connectivity between our countries as we move towards an endemic COVID future.”

Australian government sources confirmed there were still some details to work out with Singapore but the agreement could be formally announced within days.

Trade Minister Dan Tehan earlier this week told The Sydney Morning Herald and The Age that the government “ideally” wanted to open up to all countries before Christmas.

“So we keep working on travel bubbles, or the equivalent of travel bubbles, and ideally the hope would be that you would be able to open up to all tourists who are vaccinated with vaccines recognised by ATAGI [the Australian Technical Advisory Group on Immunisation],” he said.