“It’s a beautiful building. I really love the whole 70s-Danish vibe of the thing.”

That was the reaction of Andrew Thomas Huang when he saw the Sydney Opera House for the first time this week.

It was a big moment for the Los Angeles-based artist, who is lighting the sails for this year’s Vivid Sydney festival. For the past six months, he has lived and breathed every aspect of the iconic building from his studio, 12,000 kilometres away. 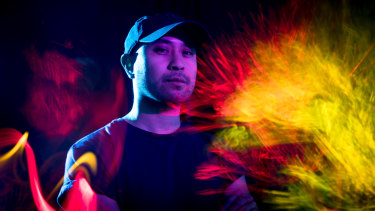 When he was first approached for the prestigious commission, he instantly agreed – despite never having visited Australia.

“It seemed like a great opportunity and I couldn’t say no,” said Huang, an experimental film-maker who has worked with artists including Bjork and FKA Twigs. “To be honest, I didn't know anything. I had heard of Vivid but I didn’t know about lighting the sails.

“I’m really honoured to participate because I know it's a really important event here. I'm highly aware I am a guest. I approached the project from the beginning from a point of deference. I know this is not just an iconic landmark for Australia but also for the world.” 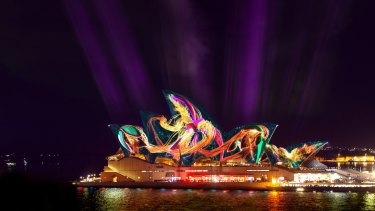 A digital render of how Austral Flora Ballet will appear on the Sydney Opera House.

The work he has devised, Austral Flora Ballet, combines images of native Australian plants – such as waratahs and kangaroo paws – with high-tech motion-capture technology using movements from a dancer.

"I knew I needed to make a piece that was unique to Sydney and Australia and something that was in conversation with a place I had never been to before,” says Huang. “My partner is a plant ecologist so naturally I started asking him what were some of the native flora in your region. That's where I came up with the idea of native plants being the theme."

Australian flowers are a familiar sight in California so Huang had ready access to specimens for inspiration. He also worked with researchers from the Royal Botanic Garden.

“A lot of your plants are beautiful, exotic and very bristly,” he said. “It was cool to do the research and figure out what plants would be fun and beautiful and also easily recognised by the general population.” 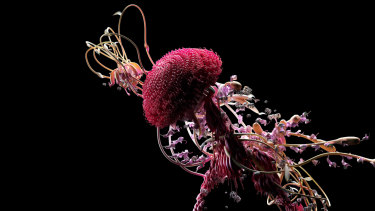 A waratah, one of the inspirations for Andrew Huang’s 2019 Vivid display.

Huang has used motion-capture technology in a lot of his work. Dancer Genna Moroni’s movements were carefully mapped to the outline of the sails in the studio.

"We projected the image of the Opera House on the dance-floor so the dancer was dancing directly in response to the architecture of the building,” he said.

Huang said he was more excited than nervous ahead of last night’s big reveal.

“I’m really happy to be here. Sydney is a beautiful city and everyone I have met have been really lovely. And I’m excited to party."