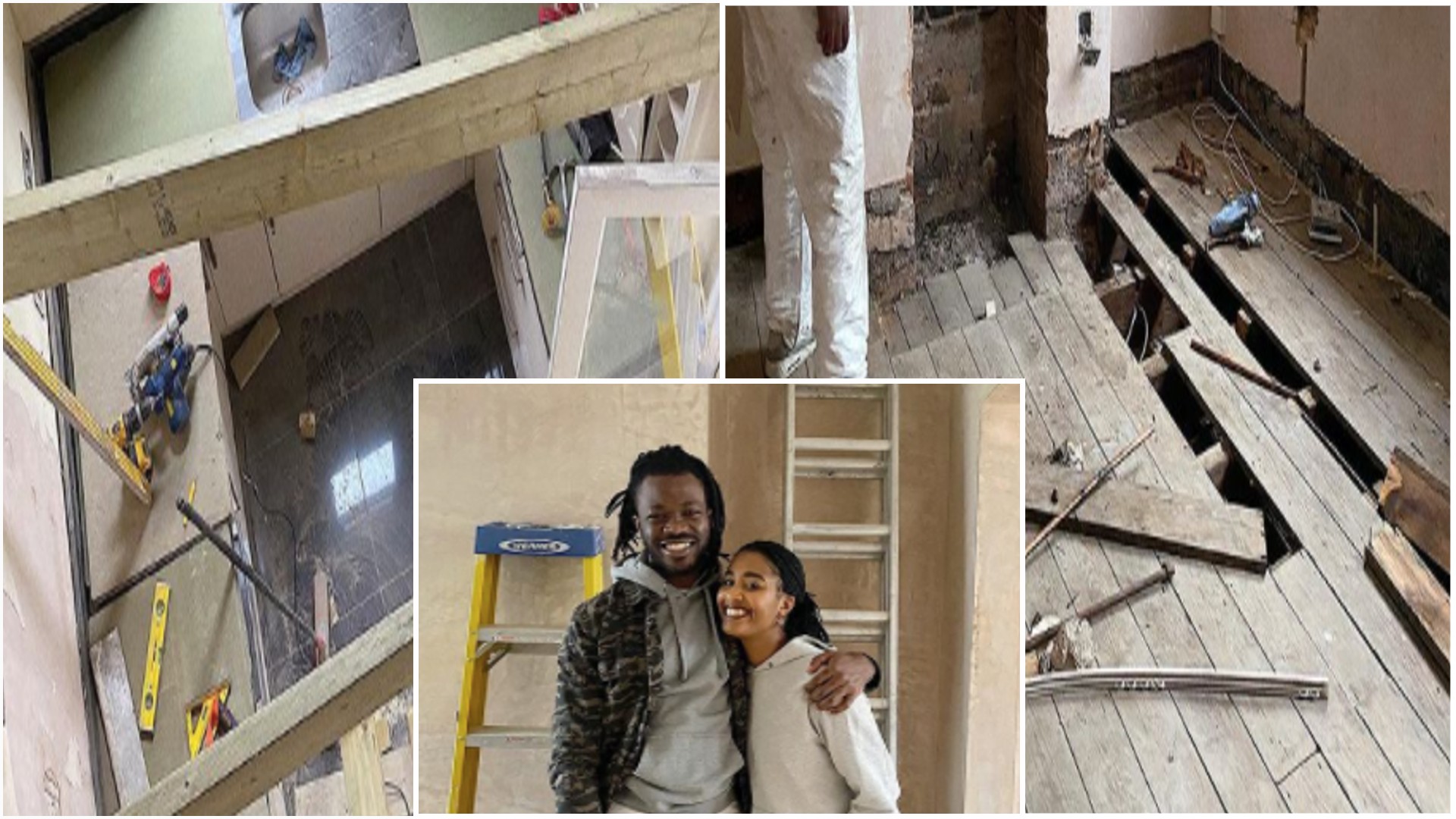 It is notoriously hard for young people to get on the property ladder without some help, especially if you’re looking to buy somewhere modern and liveable.

It’s even harder to do so in London, where property prices have skyrocketed, pricing many people out of the places they grew up.

However, there is one way to get your dream house that will cost less in the long term compared to shelling out hundreds of thousands for a new-build.

Nadine Bacchus, a woman based in South London, bought a Victorian Terrace just before Covid hit last year and then spent most of lockdown renovating it with her partner Julius.

She documented the process on Instagram, under the username @rona_renovation, gaining thousands of loyal followers who wanted to see how she did it and whether they could do it too.

Nadine and Julius are born-and-bred Londoners and they wanted to stay in the city, but a modern terraced house was completely out of their budget.

‘Renovating was a good way to get on the property ladder in London, because you can get on the ladder with essentially what you want, but you just have to put a little bit of time and effort into it,’ Nadine tells Metro.co.uk.

She says that now they’re on the property ladder, the home is theirs and will be theirs until they can increase the value, sell it, and buy somewhere that would have been previously out of their budget.

Their thinking was that they could renovate it over a long period of time, and do each room slowly when they had the time and money to do so. But, the pandemic threw a wrench in their plans and did give them a bigger sense of urgency.

‘We were getting priced out of certain areas quickly, so we knew we need to do this soon,’ says Nadine. ‘Renovating was much more appealing because those properties [that need work] are on the market for £50-60,000 less than a modernised property. It just makes sense.’

Though Nadine didn’t share the specific costs of buying her home and how much it cost her to renovate, she did say it was much more cost-effective than buying a modern house.

‘You see it on popular home and DIY shows,’ she says.

‘That’s why people buy houses cheap, with many of them flipping them for a higher price afterwards for a lot more than you spent during the renovation.’

It was a particularly financially savvy decision for Nadine and her partner because they did a lot of work themselves: ‘We’ve probably done, I would say, at least 60% of the the work ourselves. We didn’t bring tradesmen in at every single stage so we’ve just saved so much. We have saved tens of thousands by doing the work ourselves.’

She warns that it does take time and effort, and as an amateur, doing renovation work will take longer and you will make mistakes – so you should account for that.

‘If you’ve got the time and you’re able to give things a go, then you should,’ Nadine adds.

‘If you’re willing to renovate, and savvy about what you spend money on by seeking advice from people that do know what they’re doing and how to do it, then it’s worth it.’

Of course, Nadine and Julius were very lucky that during the renovation, they were able to stay with family so they could avoid the early stages of the works when the walls were coming down, there was dust everywhere, and barely a house there.

But, not everyone has this option, so what do they do in the meantime?

She says: ‘Some people live in it the whole time. You can just cordon off one room and keep it clean and tidy. I’ve seen people do that, just put in a bed and microwave, and stay there until it’s more liveable.’

Alternatively, if you can afford it, you could keep renting but downsize your home or even move into a house share for a few months before moving into your new house.

For anyone looking to do this, and do this well, on a budget, Nadine highly recommends the internet as a resource, particularly YouTube: ‘You can find a lot of information about DIY on the internet and see how people do things.’

Additionally, she says that if you can access trade discounts for materials through a friend, family member, or simply a tradesperson you’ve dealt with in the past and have a good relationship with, it will drive your costs down massively.

Nadine adds: ‘There are things you can do [to make it budget-friendly]. Like, if you want original floorboards, you can actually find a lot of wood in skips. We looked in a lot of skips, and that can save you a lot of money.’

Nadine also advises thinking outside of the box when buying fixtures and supplies, and shopping around to find the cheapest – she often used Facebook Marketplace, Gum Tree, and other similar sites to find things. In fact, all of her radiators are sourced from eBay.

‘Don’t be afraid to buy from a non-obvious brand,’ she says. ‘You can also source really good things like secondhand or for free sometimes. Just read the reviews and hope for the best.’

For Nadine and Julius, renovating during a pandemic meant that browsing and getting materials – both online and in-store – was more difficult.

There were also effects of Brexit that meant there was a a plaster shortage last year, and now there is a wood and timber shortage. The lingering effects of these shortages won’t go away overnight, and for anyone attempting what Nadine has done, she recommends preparing yourself for delays, as well as having money set aside for emergencies.

‘I would always recommend having a 10% contingency pot, if you are able to, and also mentally preparing yourself for things to go wrong,’ she says. ‘Because things are definitely going to go wrong, and if you’re prepared when they do, you’re not as frazzled.’

She advises being smart about your finishing decisions, which are often the most expensive, as well as how you want to decorate and furnish it.

‘You still have to have your wants and wishes. But for me, I feel like I don’t need luxury in this place, but I do want it to be stylish and comfortable and representative of my lifestyle,’ she says.

‘I had to get really real about some of these decisions, especially because I’m part of the millennial generation and on Instagram, where you’re always consuming and looking at what other people are doing.’

‘It’s good to get inspiration from the beautiful homes you see on Instagram, and appreciate it, but also appreciate your own situation and don’t feel like you have to copy it.’

Nadine is very passionate about interiors, and always wants your home to be a bright and positive space. She recently partnered with cleaning brand Mrs. Meyer’s Clean Day in order to promote how your inside space can help combat ‘the winter blues’ and stave off the effects of things like Seasonal Affective Disorder (SAD).

She advises that anyone wanting to change their interiors for the better, particularly during the dismal winter months, you should aim to bring the outside in.

Nadine has a lot of wooden accents in her home, as well as flowers to brighten up the rooms. But she knows that getting fresh flowers can be expensive and is not possible for everyone.

‘If you don’t want to spend money on fresh flowers every week, you can forage on your walks by snipping a bit of foliage and flowers that you can bring into your home,’ she says.

‘Alternatively, you could invest in a bouquet of dried flowers, houseplants, as well as using scents like bath oils and diffusers to bring in the smell of nature.’

Nadine also advocates for natural light sources, and keeping your space as tidy as possible.

She says: ‘Cleaning with scents and products that lift my mood is an important part of ensuring my weekend clean feels positive and productive. These small little acts of joy can make you feel good about participating in life, even if you feel down because the weather’s not great.’

Permanent fixtures and expensive décor is not necessary, particularly if you’re renting or if you’re in the process of renovating and your money is being spent elsewhere, she adds. But, there are plenty of ways to make your house feel like a home – no matter where you are.

If you are hoping to undertake a similar project as a first-time buyer, make sure you do your research, and know what you’re getting yourself into.

But, it is possible and more affordable than you might think, and Nadine and Julius are happier for it.