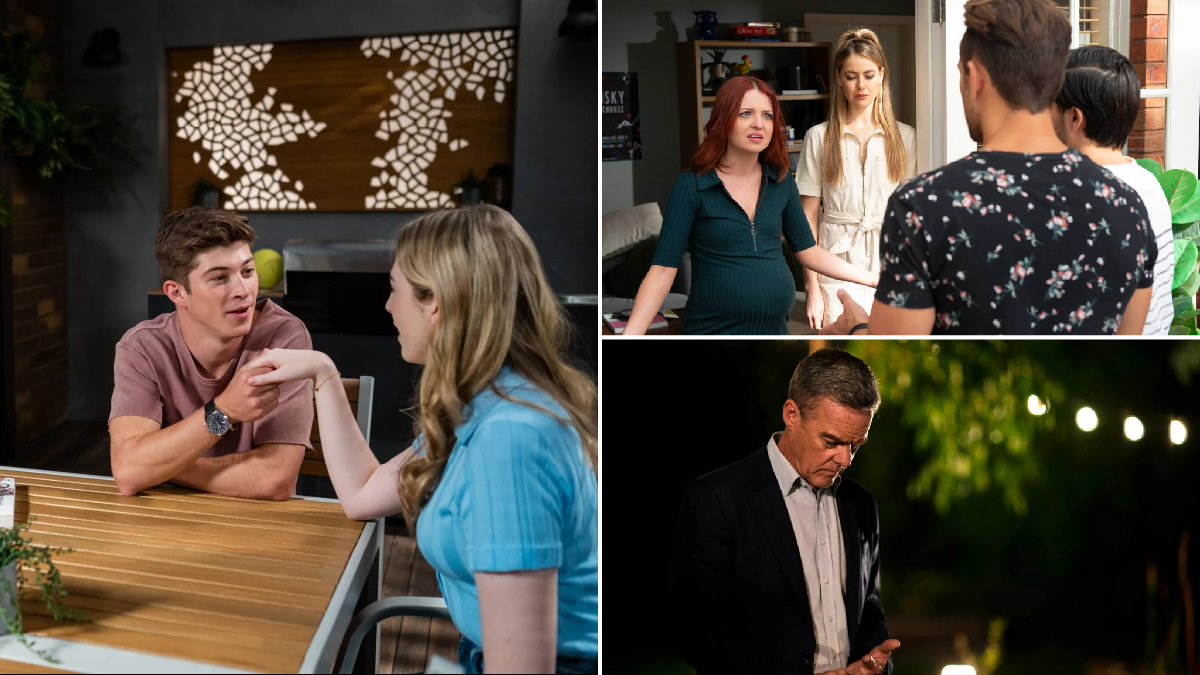 There are some big changes and lots of adjustments ahead for the Neighbours. Some relationships are set to end, others transform into something new, and for others it’s working out a new normal.

Nicolette (Charlotte Chimes), Aaron (Matt Wilson) and David (Takaya Honda) are trying to navigate their way forward after the painful times of late, with Nic having to readjust to life with the two men who drove her away, and them coming to terms with having to trust her again. Can they find some common ground before Nic feels the need to take off again?

Hendrix (Benny Turland) and Mackenzie’s (Georgie Stone) relationship is about to hit the rocks over his cancer scare. Can they survive this?

Terese (Rebekah Elmaloglou) finally learns the full truth of Paul Robinson’s (Stefan Dennis) awful recent behaviour and makes a huge decision. Is this the end for them?

And while all that’s going on, Amy’s (Jacinta Stapleton) having to navigate an emotional minefield as she starts to fear her boyfriends fancy each other more than her. But there’s more to it than meets the eye.

Harlow is also up to some tricks in trying to improve her standing at Lassiters. But has she got it all wrong once again?

Here’s what’s ahead in Neighbours.

Things get worse for parenting trio

It’s not easy for Nicolette, David and Aaron to slot back into their previous living arrangements and to adopt the parenting plan they’d originally made. With Nic having been so badly hurt by the boys she’s struggling to let go of Isla, but equally they live in fear she might do another midnight flit. Tensions rise between them and when the heat gets too much, Nic snaps, telling something to Jane she’ll later regret. She’ll regret it because Jane is far too quick to tell Chloe, who in turn shares it with the dads. Now things are even worse than they were, with Nicolette feeling suffocated by the untrusting boys. Without any time to herself with Isla, Nic is on the edge of snapping again. Could she do another runner?

Harlow ready to fight back

Harlow jumps at the chance to step up when she learns Chloe is off to Adelaide. Terese is reluctant to promote her again, but Harlow is manipulative in her bid to regain power. In order to give herself the upper hand, Harlow fakes an error on the roster to cause trouble for Chloe, and it works when

Chloe misses a big meeting. But a life of deviance isn’t in Harlow’s future as she is instantly caught out, and worse is to come for her when someone unexpected shows up.

Hendrix has calmed down since grappling with cancer fears, but he’s not entirely over his scare. When he’s gripped by a sudden pain, he is certain that this time it must be bad news. Seized again by the paralysing fear he’s dying, he takes it out on Mackenzie. Their relationship is hanging by a thread.

Following Amy, Levi, and Ned’s cosy night at Amy’s flat, things are weird. Not between Levi and Ned, but between Amy and the other two. They give her space like she requests, but they’re concerned about how much she is keeping to herself. Levi, meanwhile, is still taking the brunt of the jokes at work after the gossip got around about his menage a trois and is getting fed up of it. Between that and Amy’s distance, his eye begins to roam as he starts to think the relationship is too much hassle. An attractive newcomer catches his attention and he decides to go on a date with her.

When Amy finds out she is by far not ok with this. Levi is stunned by her hypocrisy, but she goes on to explain the truth behind her distance – she’s afraid he and Ned will turn gay now that they’ve all been together. While they laugh it off – the boys say they are so not each other’s type – Amy isn’t as relieved as she should be, because Levi now has his eye on someone else. Will she have to share her man?

Hendrix and Mackenzie break up

Mackenzie is pushed to her limit and suggests she and Hendrix take a break. To her shock, he calls her bluff and tells her it’s a good idea. Karl later decides to take him to one side to have a chat man to man, with Kyle chiming in to help. Hendrix needs some tough love, so they hit him with a difficult ultimatum.

After learning of Paul’s role in Jesse’s disappearance and the underhand tricks he pulled to get baby Isla, Terese is livid. She can’t even look at her husband for the disgust she feels. Paul wants to get back in her good books but goes about it in a very Paul way with a scheme, but it all goes awry and makes everything worse. He tries to get Jesse to come back, but Terese isn’t the least bit impressed. She has her own agenda in reconnecting with Jesse, one that leaves Paul seriously irked. Incredibly, when Jesse arrives in town he sticks up for Paul, but Terese isn’t ready to hear it. In fact, she has other plans. Is this the end of their marriage?