STEPHEN GLOVER: Why is ours the only Government that wants to raise taxes on the cusp of a recession?

Jeremy Hunt seemed pretty pleased with himself when he sat down at the end of his Autumn Statement yesterday, and was duly patted on the shoulder by an appreciative Rishi Sunak.

But I don’t think his grim speech was cause for self-congratulation or approval. It was a Budget — I will call it that, because that’s what it was — without hope or vision.

In truth, it could easily have been delivered by a Labour chancellor. That does not necessarily make it all bad, of course. There were some measures, such as increasing pensions and benefits at the rate of inflation, with which it is hard to disagree.

But by targeting ordinary hard-working taxpayers he abandoned any reasonable claim to be an authentic Tory. What is the point of a Conservative Chancellor who thinks and speaks like a Labour one?

The Office for Budget Responsibility (OBR) forecasts that living standards will fall by 7 per cent over the next two years, despite government support with energy bills. Eight years of growth will be erased.

Admittedly, the OBR has a reputation for poor forecasting. But if the outcome is as dire as it suggests, it’s hard to see how the Conservative Party can avoid being wiped out at the election in 2024.

Why, after what will be 14 years of Tory rule, should voters back a party that will be widely seen as having plunged the country into a prolonged and deep recession? 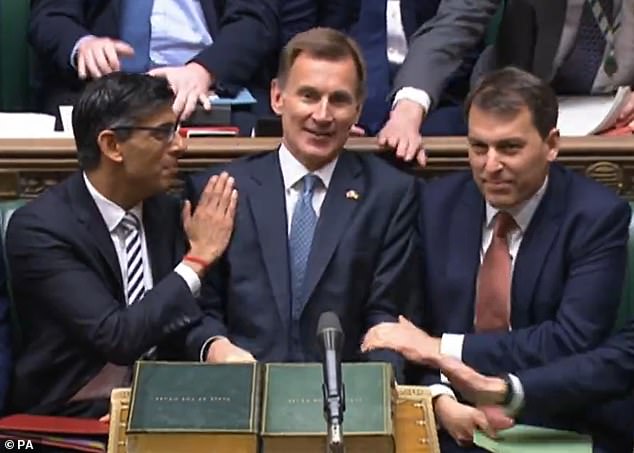 Jeremy Hunt seemed pretty pleased with himself when he sat down at the end of his Autumn Statement yesterday, and was duly patted on the shoulder by an appreciative Rishi Sunak

No doubt Mr Hunt believes the electorate will esteem the Tories for having made unpopular decisions, and for re-establishing a reputation for economic competence. Some hope!

And yet it did not have to be like this. Even now I am bewildered as to why there should have been a Budget of this sort now. Mr Hunt certainly didn’t provide any explanation yesterday.

The Chancellor was at pains to emphasise that Britain had been buffeted by ‘unprecedented global headwinds’ which are affecting other countries.

All largely true. But Mr Hunt didn’t supply an answer to this question: if other major economies are as badly, or even worse, affected, why haven’t they had emergency budgets that raise taxes and cut spending?

Why does the British Government alone feel, in defiance of economic orthodoxy, that it is desirable to increase taxation on the cusp of a recession — which the Chancellor informed us yesterday has already begun?

Believe it or not, only three months ago Rishi Sunak declared during the Tory leadership contest that the basic rate of income tax was going to be cut by a fifth if he became prime minister. He undertook to reduce the tax bill ‘at the fastest rate since Nigel Lawson and Margaret Thatcher’ in the 1980s.

It wasn’t Liz Truss, who has been written off by the political classes as being pretty close to a lunatic, who made this dramatic pledge. It was Mr Sunak, as recently as August. 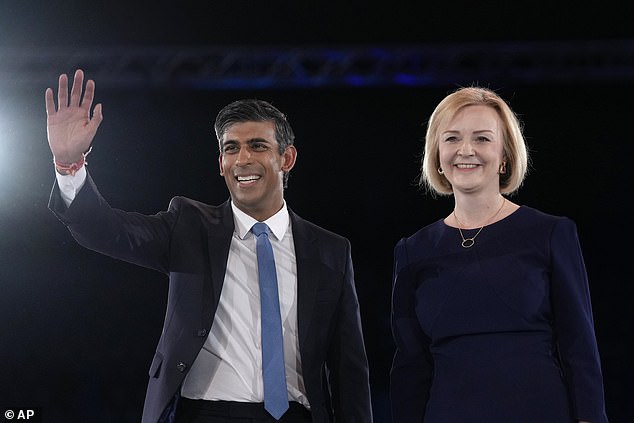 It wasn’t Liz Truss, who has been written off by the political classes as being pretty close to a lunatic, who made this dramatic pledge to reduce the tax bill ‘at the fastest rate since Nigel Lawson and Margaret Thatcher’ in the 1980s. It was Mr Sunak, as recently as August

Has the world changed much since then? No, not really. Inflation was already at 9 per cent in August, and forecast to climb much more. The Russians had been running amok in Ukraine for six months. The wholesale price of gas was higher than it is now.

Clever, balanced Mr Sunak has completely changed his mind about taxation in a very short space of time, and encouraged Mr Hunt to pull the communication cord in a state of misplaced panic.

Why? Don’t we deserve an explanation? A possible one is that the purpose of the Budget was to calm markets, which had been so unnerved by Kwasi Kwarteng’s mini-Budget eight weeks ago.

Yet since Mr Hunt reversed most of Mr Kwarteng’s measures, the pound has soared against the dollar, and gilt yields have returned to roughly where they were before Kwasi laconically delivered his bombshell. The markets seem pretty relaxed.

A second, more plausible explanation was offered by my colleague Alex Brummer in the Mail a few days ago. He explained how, to a much greater extent than any other major economy, Britain has acquired debt that is largely index-linked, which has therefore soared with inflation. This is costing extra billions.

Mr Hunt didn’t dwell yesterday on what sounds an unforgivable error, presumably because if he had done so he would have exposed his immediate predecessors (including Mr Sunak) to justified obloquy for being asleep at the wheel. 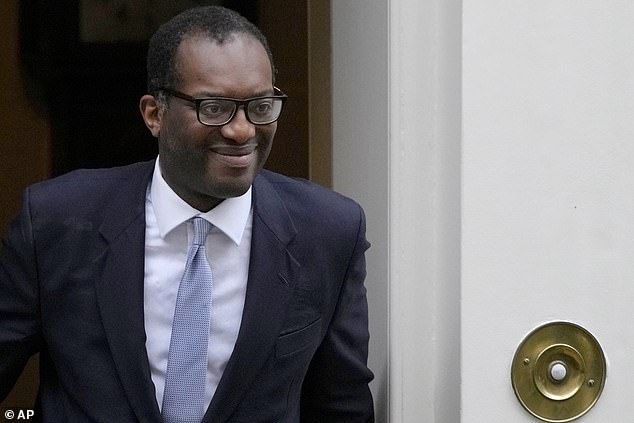 Since Mr Hunt reversed most of Mr Kwarteng’s measures, the pound has soared against the dollar, and gilt yields have returned to roughly where they were before Kwasi (pictured) laconically delivered his bombshell

So the unspoken reason for having an emergency Budget, while the finance ministers of other countries are biding their time, is partly the spiralling cost of servicing our debt.

Even so, the timing and scope of the tax increases remain baffling. After all, Britain has one of the lowest debt mountains among the seven largest economies. It is by no means negligible, of course, but far smaller than Japan’s, and significantly less than those of Italy and even France.

This is my question. Was it really justified, especially at the beginning of a recession, for the Government to increase taxes — and only three months after Rishi Sunak undertook to slash them?

The answer is no. Some modest tax increases might have been defensible, but not on this scale. As it is, the hikes in tax unveiled by Mr Hunt will inhibit growth. Despite banging on about the importance of growth, he doesn’t grasp this simple point.

He evidently hopes that by increasing spending on schools, and pouring further ill-managed and ineffective billions into the NHS — while concentrating tax increases on the better-off — he’ll win back voters.

By the way, I can’t forgive Mr Hunt (or Mr Sunak) for effectively freezing defence expenditure at 2 per cent of GDP in the midst of a European war. As recently as July, when he was standing in the Tory leadership contest, he echoed Liz Truss’s target of 3 per cent of GDP, saying it should be reached two years earlier, by 2028. 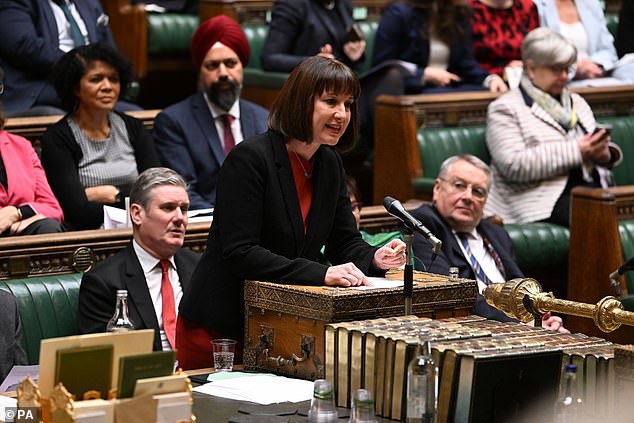 Rachel Reeves, the Shadow Chancellor, (pictured) picked holes in the Budget — not difficult — but didn’t say what she would do

So we have a Chancellor who changes his mind about defence spending in a matter of months, and a Prime Minister in favour of cutting taxes one moment and happy to increase them the next.

I should also say, in a spirit of fairness, that while Labour also talks about the importance of growth, it appears to have no plan whatsoever. Rachel Reeves, the Shadow Chancellor, picked holes in the Budget — not difficult — but didn’t say what she would do.

Is there any hope for the Tories? A sliver. Spending cuts won’t take place until 2025 so it is possible, at any rate until the election in 2024, that the Government won’t be seen by voters as standing for austerity.

It’s also possible that the global headwinds which Mr Hunt talked about will lose some strength, and that the recession will be shorter and less acute as a result.

That’s the best hope for the Conservatives, and a slender one. This Budget made their re-election in 2024 less, not more, likely. Many will think they would benefit from a period in opposition, where they can work out again the meaning of being Tory.