The scene was not dissimilar to something you’d see in a picture-perfect TV sitcom. The moment a pregnant woman steps out of bed, her waters breaking in gushing, comedic fashion. Only there was nothing funny or picture-perfect about the situation I was in: my waters had broken 15 weeks early; over three months before they should have, skipping an entire trimester in the process. 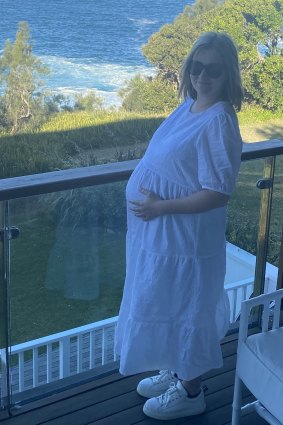 Lorna Gray on her babymoon, the day before her waters broke.

We were, rather ironically, trying to relax on an early babymoon in regional NSW after what had been a horror pregnancy. We’d lost one of our twins, Rose, to Twin-To-Twin-Syndrome in our 20th week, then had an agonising five-week wait to see if our other twin Violet’s brain had been affected. We’d just had the results of Violet’s MRI (mercifully normal) and were told to try and relax for the upcoming final trimester. It felt so unfair that six months of hellishness – hope, despair, then a little bit more hope – had culminated in this.

An extremely frantic Google search told us Wollongong was the nearest emergency department to where we were staying. I was hysterical as I was under the impression that once your waters had broken, that was it – the baby was coming. Maybe I’d been watching too many picture-perfect sitcoms. And I’d consulted Dr Google enough to know the odds were stacked against a baby born at 25 weeks.

Once in hospital, I was given the first of two overall doses of steroids which might have saved Violet’s life as they can improve the baby’s lung maturity. Wollongong wasn’t equipped to care for extremely premature babies, so I was transferred via ambulance to the Royal Hospital For Women (RHW) in Sydney’s Randwick, where I’d already been attending the Maternal Fetal Medicine department.

It’s funny how quickly you adapt to the situation in hand. We now scrambled to research as much as possible on preterm births, the information at our disposal online proving to be a blessing and curse. Every day the baby remains inside your womb can make a huge difference. I had several false alarms and was in the delivery suite three times over the next couple of days.

Each time my contractions became too strong or frequent, the amazing nurses sprang into action and my adrenaline spiked. But I’d almost gotten into the rhythm of being in the hospital bubble, being hooked up to an ultrasound several times a day and hearing Violet’s soothing heartbeat. We’d even managed to watch an entire season of Line of Duty.

“She looked like a tiny, broken, baby bird, complete with miniscule leg cast from a fractured femur during delivery.”

Stark reality came crashing down on day five when I was rushed to the delivery room for the final time. It was undoubtedly the most traumatic thing I’ve ever experienced. I’m thankful I was put completely under and didn’t get to see how close we were to losing both our daughters.

When I woke up, there was no time to process what had happened as I was onto the next job – being a mum to a baby in the NICU.

I was in a drugged-up haze when I first saw Violet in an incubator. She looked like a tiny, broken, baby bird, complete with miniscule leg cast from a fractured femur during delivery. 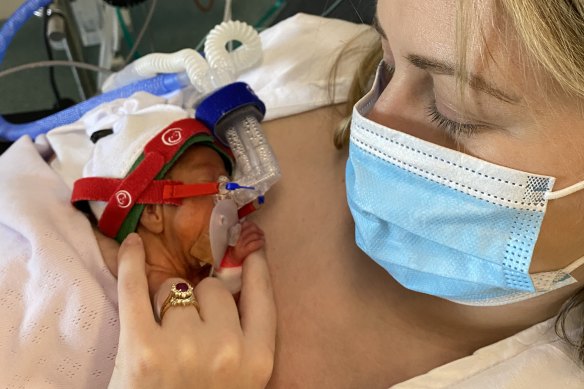 Lorna and baby Violet at the Royal Hospital For Women (RHW) in Sydney’s Randwick.

The love we felt for this tiny creature was all-consuming.

I find some of the pictures we took of Violet very confronting now, but, at the time, I was sending them to family and friends.

Again, you quickly adapt to the “NICU norm”, accepting you’ll only hold your baby for kangaroo cuddles – when the baby is placed on the mother’s bare chest – once a day and getting well acquainted with a breast pump. The nurses at the RHW achieved archangel status as they helped me adjust to being a premature mum. 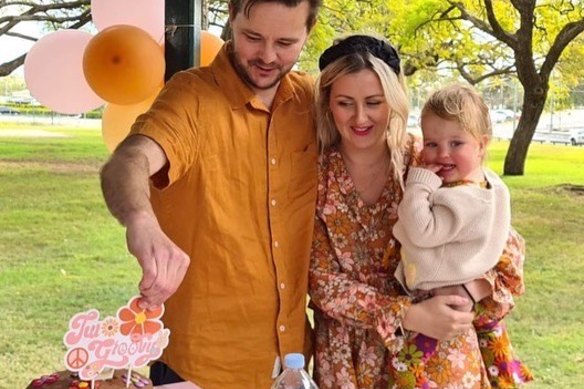 Lorna and husband Liam with Violet on her second birthday in August.

When I left hospital to go home for the first night without her, I felt like I’d left part of myself behind. But I knew she was in the best possible care. Days in the NICU became months and Violet exceeded all expectations. We know how lucky we were that overall, she didn’t face any major health hurdles in her 77 days there. Slowly she grew and was weaned off breathing support until finally we got to bring her home.

Looking at her now, you’d never guess her start in life. It’s only now, two years on, that I can fully appreciate the magnitude of what we went through. People often assume you’re strong, but you do what you have to do at any given time.

Having a baby prematurely has changed me irrevocably – you don’t come out of the NICU the same person. But whenever various anxieties threaten to send me spiralling, I try to channel my daughter – if I have one per cent of her fighting spirit, then I’ll be just fine.

The Royal Hospital for Women will be doubling donations on November 23 as part of their annual Giving Day appeal. These donations will help save the lives of babies like Violet.