Instagram is weighing a plan to hide the number of likes that users get on posts as one of several steps the company is considering to fight bullying on the platform. Before her interview with Instagram head Adam Mosseri, “CBS This Morning” co-host Gayle King spoke to five kids ranging in age from 12 to 18 years old who are all daily Instagram users: Chantal, Jackson, Gabby, Aashean and Allison.

In their wide-ranging conversation, they discussed how they’d feel about an Instagram without public likes, cyberbullying and the lengths they’re willing to go for the perfect photo. Below are excerpts of their conversation:

Hidden likes: “What are you posting for?”

AAHSEAN: We wouldn’t post as much ’cause it’s just what are you posting for if you’re not, you know, interaction with your followers.

GABRIELLA: Although the amount of likes has a negative effect on people it also brings up some kid self-esteem.

JACKSON: If I have a post and it gets under 200 likes, I just delete it. 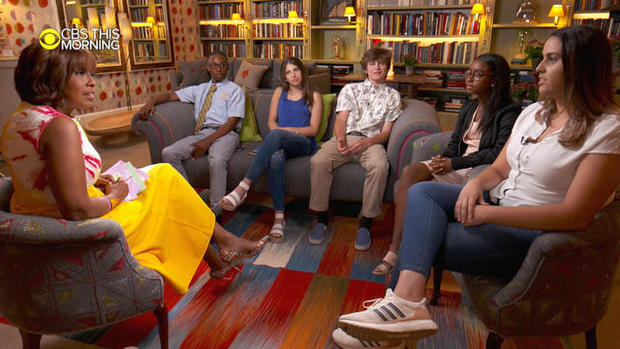 GAYLE KING: Tell me this. What’s your process in deciding what pictures you’re going to post? Does a lot of thought go into what you post?

GAYLE KING: What about you, Gabby?

GABRIELLA: I’ve taken 200 just to take, like, the one good picture.

KING: To get one good picture?

GABRIELLA: I just try to, like, stick out my neck a little more and, like, tilt my head down.

JACKSON: I think my good angle is anything above, like, the chin. Below the chin, you get, like, that double chin.

KING: This is amazing to me. You, Allison?

ALLISON: When I’m taking a picture with my friends standing up, need the left side.

KING: What kind of pictures do you notice that get the most likes?

GABRIELLA: The ones you put the most effort in.

KING: You think you’re getting a true representation of what people are really living and doing on Instagram?

ALLISON: No because there’s a lot of people have their Instagram account and they have their fake Instagram account, their finsta … ever since that that’s become a trend, people are more gravitated towards finsta to put things on there that they don’t want everyone to see.

JACKSON: My mom always told me that how I act is, like, a representation of how, like, she acts or how she raised me. So I kind of just, like, base it on that.

KING: You don’t want to disappoint her, you’re saying?

JACKSON: Yeah. I don’t want to disappoint my mom.

Cyberbullying: “You can’t escape your phone”

AAHSEAN: When I think of cyberbullying I think of pictures being posted, comments, like, mean comments, threats being thrown around … it’s just, like, uncalled for and just mean and heinous.

JACKSON: I try to ignore it, but the problem with cyberbullying is that you can’t really escape it, ’cause you can’t escape your phone.

GABRIELLA: People have the most confidence online … You have someone saying, ‘You’re so ugly. You look like this.’ But at school, they won’t say anything to you. So I confront them at school.

GABRIELLA: And I’m, like, “Why’d you say that?” But in school they’re just, like, “Oh no. Like, I didn’t mean that.” You said it though. It may have been online, but those were still your words.

CHANTAL: I instantly block them because I’m wasting my time confronting them and they’re wasting their time just focusing on me.

KING: So have you ever blocked someone and they know that you blocked them and then you run into them? What is that like, that experience like–

GABRIELLA: It’s even more awkward when you have class with them. You have to be with them every day for the rest of the school year.

KING: Why would people be upset if they’re blocked?

GABRIELLA: It can be such a powerful thing where it’s, like, “OK, we hate each other now.”

King also asked them about Instagram testing a comment warning feature using technology that can flag unkind comments and send a message to the user.

ALLISON: It’s not gonna stop cyberbullying altogether. But I do think that there are definitely people out there who would take that into consideration for sure.

CHANTAL: And you don’t know what that person’s going through at home or anywhere else. So people should really, like, really think about what they’re saying.