When this masthead reported last week that ABC Melbourne had lost close to half its average audience radio compared to the same time a year ago, it didn’t go down too well in the broadcaster’s Southbank offices.

“The comparison is unfair,” one insider complained, “because last year was unnaturally high for us.”

There’s some truth in that proposition. Both ABC Melbourne and ABC Sydney enjoyed significant spikes during the two years of the pandemic, as did their commercial talk radio competitors 3AW and 2GB (both owned by Nine, which also owns this masthead). As life has returned to something like normal, some of that audience has dropped away. 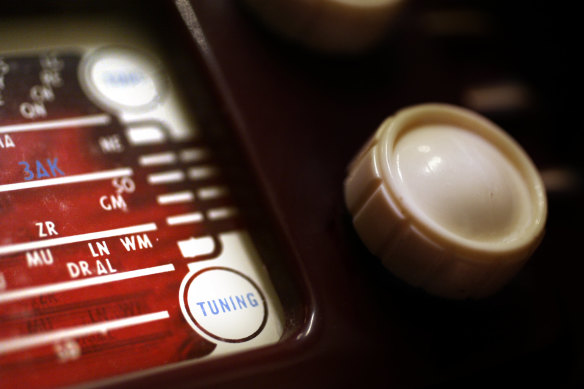 Radio is a rapidly evolving medium, but the way it is analysed hasn’t always kept pace.Credit:Wade Laube

But the drop for the ABC was far higher than for its rivals. So, was it an aberration, a low point on the cycle of ups and downs that afflicts all broadcasters? Or does it hint at a more significant trend?

To try to answer that, we’re going to compare this latest survey – the fifth of the eight taken each year – across a number of years prior.

But it’s also true that last year’s figures were abnormally high in both cities (they may have been even higher in 2020, but we can’t be sure since surveys 2-5 in 2020 were cancelled because survey books could not be issued during lockdowns).

“ABC local metropolitan stations saw a much higher spike [due to COVID] than other stations,” says Judith Whelan, director of ABC regional and local. “We recorded our highest radio reach and share figures in more than a decade as audiences were seeking information on the pandemic and emergency information around extreme weather events, as well as seeking connections with others in their communities.”

Post-pandemic, “those gains have dropped and settled mostly back to where they were pre-pandemic, and in some cases above pre-pandemic levels,” she said.

So the ABC is only down from those aberrant COVID highs?
Not quite. Across the six years pre-pandemic (2014-19), ABC Melbourne averaged a 9.7 per cent share of audience across seven days, and ABC Sydney 9 per cent. The 7.1 per cent reported last week was ABC Melbourne’s lowest survey five result recorded (going back to 2014, which is as far as Commercial Radio Australia’s Radio Alive database goes), while Sydney’s 8 per cent was the lowest since 2018. 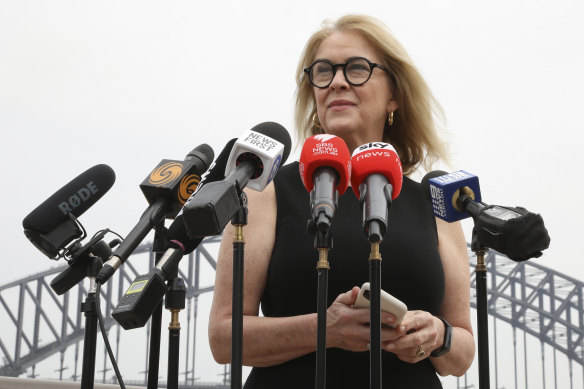 Do ratings actually matter to the ABC?
Yes and no. The ratings exist to help commercial radio stations set the price of advertising on their platforms. The ABC, of course, doesn’t sell advertising, so the core rationale of the system is irrelevant to its operations.

“Commercial radio and public broadcasting have not much in common except technology,” observes Jon Faine, who presented the morning show on ABC Melbourne for more than 20 years before retiring in late 2019. “When you use a commercial measure to assess a public broadcaster it’s like applying the rules of cricket to football.”

The ratings do help ABC management gauge how well its radio content is connecting with audiences, but only to a point. “Radio ratings are just one part of the listening picture,” says Whelan. “The ABC is delivering audio content where audiences are looking for it – and that is increasingly not on traditional radio delivery platforms. That means we are putting increasing resources into content for our radio network’s digital pages and social media accounts.”

How do the ratings even work?
Ratings agency GfK uses a sample of 60,000 people in the five mainland capital cities, and asks them to record their listening habits manually for one week of the six or so in each survey period. To count as a “listen” they need to have been tuned in for eight minutes within a 15-minute period, and they are meant to recall and record where they listened (at work, at home, in the car), and on what device (radio, computer, app, with or without headphones).

It’s a lot to ask, and that’s why there’s pressure to move to an automated system less reliant on subjective recall. To that end, Commercial Radio Australia announced last October that electronic watch meters would be rolled out from this year, to a panel of 2000 people. That process began in March. Its new Radio360 system will also do more to capture streaming audiences.

“There are seismic changes going on in the audio world which help provide context to changes in metro radio listenership,” says Chris Walton, managing director (Sydney) of media buying agency Nunn Media. “Overall audio audiences are going up, but with an explosion in content available, and many different ways of listening to audio, some of this audience is moving away from traditional methods of listening.

Who actually listens to the radio?
If you use the cumulative audience measure – which counts as a listener anyone who has tuned in for at least eight minutes in any 15-minute period at any time during the week – the answer is almost everyone. In Melbourne, 4.633 million people passed that threshold in the most recent survey. In Sydney, it was 4.569 million.

The ABC stations have often outperformed their commercial rivals on this measure (though not in the latest survey), and even its youth network Triple J looks strong on this measure, despite its ongoing loss of young listeners; its average audience of 22,000 in Sydney, for instance, translates to a “cume” of 588,000 listeners across the week.

“Every media owner everywhere would rather speak cume as it is a bigger figure and sounds more impressive,” says Walton. But, he adds, “honing in on who is listening at any one time, and how this tracks over time, provides far more insight.”

A big discrepancy between average and cume suggests lots of people listening for short snatches of time. Higher averages during lockdown probably point to the fact more people had the radio on at home, for longer; smaller averages for the ABC now might be explained by a partial return to the office, less hunger for continual updates (and perhaps fatigue with the sense of crisis), and a reduction in commuting (in-car listening accounts for a big chunk of the radio market). 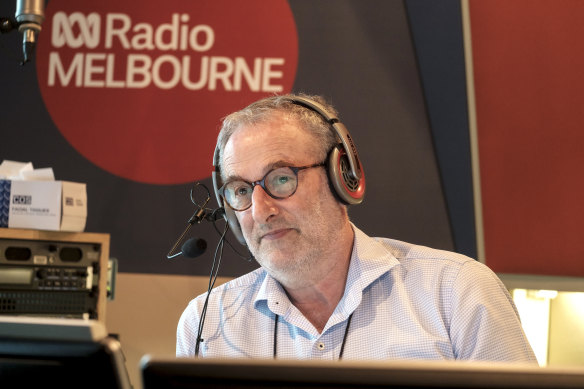 Jon Faine in the studio during his final week on air, in October 2019.Credit:Luis Enrique Ascui

Demographics are also a major factor in audiences for the ABC. Almost two-thirds of its Melbourne audience is aged over 65 (during the pandemic, it was around half). To be sure, Nine’s talk stations face similar issues, with 57 per cent of 3AW’s audience and 62 per cent of 2GB’s aged over 65.

At the same time, Triple J is losing share in the crucial 18-24 segment to the commercial networks (and especially, it seems, to Smooth). In 2017, the youth station’s share of 18-24 was 13.3 per cent in both Sydney and Melbourne; in the most recent survey it was 9.6 per cent in Sydney (a big bounce back from the 4.4 per cent of the prior survey) and 4.6 per cent in Melbourne.

Meanwhile, the increasingly important DAB+ spectrum – around 60 per cent of whose listeners are aged under 40 – is dominated by easy-listening nostalgia rock. However, the national broadcaster’s six measured stations (Jazz, Sport, Kids, Country, Double J and Triple J Unearthed) account for around 30 per cent of DAB+ listeners in Melbourne and 40 per cent in Sydney.

So where does all this leave the ABC?
Radio ain’t just radio anymore. In fact, as consulting firm PWC put it in its most recent Australia Entertainment and Media Outlook, “2021 was the year where what was traditionally referred to as ‘radio’ transitioned to ‘audio’.”

Seen in that context, Whelan insists the ABC is doing fine. “Listeners accessing our digital content almost doubled over the past two years from 1.9 million in 2020 to close to 4 million in 2021,” she says. Page views for articles produced by ABC Radio Melbourne are up 22 per cent year on year. Social media followers are way up. Triple J reaches “nearly 3.2 million people each week across metro and regional Australia on linear radio, plus millions more with daily and weekly social content”.

Yet even if the numbers don’t tell the whole picture, they do tell part of it. Chris Walton says it should be aiming to be “within the top three or four broadcasters in each market, as this would reflect they are achieving relevance and engagement with their local audience whilst appreciating they are not for everyone”. In Sydney, it currently sits at number four. In Melbourne, this survey has it at number seven.

Jon Faine concedes this wasn’t a good survey. “But the worst thing to do is to panic. If you need to change the way some people are making their programs, there are lots of talented people in there who can do that.”

Besides, he adds, “the fortunes of talk radio stations fluctuate wildly, sometimes for no obvious reasons. There were times we knew we were doing pretty good work and then the ratings survey would come out and you’d go, ‘Well what happened’.

“You always have to interrogate what you do and be your own biggest critic,” he adds. “And I’m sure they’re doing that.”

And if you had one piece of advice? “Take more risks.”