On the day Victoria was able to boast that its Delta outbreak had reached zero cases, Gladys Berejiklian had no explanation on Wednesday as to why Sydney’s COVID-19 numbers were not budging.

The city is in its sixth week of lockdown and nothing is changing. The Premier cannot say whether Sydney has reached the peak of its second wave. All she could offer was her “humble guess” that the situation was likely to worsen. 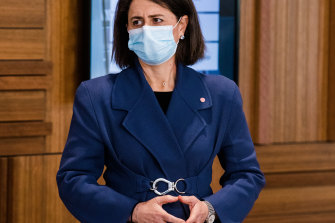 The number of cases moving about the community while infectious – which Berejiklian insists must get down close to zero – has not shifted in weeks. On Wednesday, it was 47. By that measure, freedom is getting no closer.

At the same time, Berejiklian and the federal government have stressed that vaccination rates must also rise for Sydney to have any chance of a very limited easing of restrictions after August 28.

The Premier has set a target of 6 million COVID jabs by the end of the month. To achieve this, her government will need a dramatic uptake in areas that are lagging, which happen to be Sydney’s hardest hit suburbs.

Federal data paints a sobering picture of vaccination rates in south-west Sydney, the absolute epicentre of this outbreak. Only 14.6 per cent of the area’s adults are fully vaccinated compared with 26.9 per cent in North Sydney and 23 per cent in the eastern suburbs (where this outbreak started).

A combination of confusing messaging about the AstraZeneca vaccine, diverse multicultural communities and a young population has made the task particularly challenging in the south-west. But given it is increasingly clear that the current lockdown measures are not driving down case numbers, vaccination becomes even more critical.

The NSW government has succeeded in encouraging wide-scale testing, at times reaching more than 100,000 tests in 24 hours. This is because the message has been clear and positive. Berejiklian starts each press conference with test numbers, before cases or even deaths.

The Premier now needs to do the same with daily vaccination rates. By providing up-to-date data on the number of jabs in arms each day, she would be clearly indicating the priority. It would give people a sense that they can join the momentum and play a role in pulling Sydney out of lockdown.

Berejiklian had promised to detail how our emergence from stay-at-home orders would look by delivering a “road map”. On July 7 it was “just days away”, she told us. But the release of that plan has been shelved. Deputy Premier John Barilaro had been given the task of coming up with that path to freedom, but Delta remains a step ahead of NSW.

On Tuesday, Berejiklian justified the decision by saying: “I don’t want to raise expectations.”

Similarly, she had promised the state’s year 12 students they would return to face-to-face teaching on August 16. Rapid antigen testing would make it safe, she assured them. And Hunter Valley residents would sacrifice their Pfizer shots for students in COVID hotspots.

However, just like the long-awaited freedom road map, Berejiklian’s message changed on Wednesday. She stressed that while it had “definitely been our intention” to have all final-year high school students back in the classroom, it was abundantly clear she had over-promised. Instead, she said, now students had been told “there will be some opportunity for some level of face-to-face”.

These decisions are pointing to policy on the run.

Some of the most significant decisions this government is making are thrashed out between a small group of ministers in the form of Berejiklian’s crisis cabinet, which seems increasingly exclusive and inward-looking.

While a select group of senior bureaucrats, such as Chief Health Office Kerry Chant, are in that meeting – as is, curiously, the Premier’s media adviser – some of the most senior members of Berejiklian’s cabinet are left out.

Planning Minister Rob Stokes and Infrastructure Minister Andrew Constance are not in the crisis cabinet, so they had no say in – or warning of – the government’s snap decision to shut down the construction industry. Education Minister Sarah Mitchell isn’t in the room, either, meaning she is not involved in the major decisions affecting schools.

Whether Berejiklian liked it or not, there was always going to be a comparison between NSW and Victoria’s handling of this Delta outbreak and whether her state’s delay in locking down would end up proving costly. Victorian Premier Daniel Andrews delivered the answer to that question on Wednesday morning with a single-word tweet: “zero”.

Meanwhile, in NSW, there is no roadmap out and we do not even know whether we’ve reached the worst of it. Berejiklian may still have some goodwill to bank on, but that will dissipate the longer Sydney remains in this holding pattern.