A few years ago, I was looking for some kind of large and indestructible plant that would make our house seem like a lush oasis in the dead of winter. Perhaps it was a bit of a tall order. My children tagged along, distracted by the bird feeders and whirligigs. "A plant! A living thing!" I reminded them. At one point I lost track of my 11-year-old daughter, only to eventually find her stroking the leaves of the saddest, most miserable-looking plant I had ever seen.

"It needs us!" she pleaded. And I knew I was sunk. 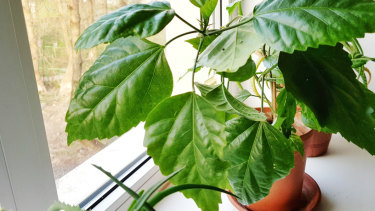 Like the plant she rescued, she can be temperamental and is prone to acting out dramatically when stressed.Credit:Shutterstock

Every pet we have is a rescue, many of them acquired after she ran one of her influence campaigns, complete with PowerPoint presentations, propaganda posters, and not-so-subtle dinner-table speeches. I knew if we walked out of the store without this sickly-looking tree, I'd simply be signing myself up for weeks of infotainment about the benefits of half-dead hibiscus plants.

The children named it Hibby, and it took over a corner of the dining room as I scrambled to learn enough about hibiscuses to save it from what seemed a certain death. The first thing it did was drop every one of its leaves.

Fantastic; now I was going to be responsible for the demise of this pathetic plant, which surely would have died anyway if we'd just left it in the garden centre under the "75 per cent off!" banner where we'd found it.

And so I watered and I fertilised and slowly, slowly, new leaves began to emerge, large and shiny green, however sparse. A few tentative buds developed, then bloomed spectacularly into improbable pink flowers. When the weather got warm enough, I moved Hibby onto the back deck.

It promptly dropped all of its leaves.

Like the plant she rescued, she can be temperamental and is prone to acting out dramatically when stressed.

Over the past few years, I've learned that Hibby needs attention, but not too much. Over watering will do as much damage as neglect. It gets stressed by changes in its environment, even if the change ultimately turns out to be beneficial. And just when it looks so skeletal and lifeless that I'm sure there's no hope, it will summon up whatever resources it has and burst into bloom.

"Oh, for heaven's sake, can't you pull it together?"

"I don't know what you want from me!"

These are all things I've said to Hibby recently. But they're also things I've wanted to say to my now 14-year-old daughter. Like the plant she rescued, she can be temperamental and is prone to acting out dramatically when stressed. These days she spends hours in her room, ear buds plugged in, her closed door shutting the rest of us out. I spend endless amounts of energy trying to interpret her various silences. Sometimes I wish she would simply drop her leaves.

The thing about a house plant is that it can't talk. It can't tell you that the sunlight is too weak in that corner, or that its nitrogen levels are dangerously low, or that its roots are crowded in its plastic pot. Despite how much I might talk to it – inquiring after its health, or praising it when it blooms – Hibby never responds. Its woody stalks and slick green leaves remain frustratingly mute.

Though my teenager is blessed with the power of speech, she struggles sometimes to articulate what she needs.

It's also hard to know what changes might be working. Like the proverbial steering of an ocean liner, it takes a long time for a small change to have any visible effect. Did adding fertiliser to the water help? What about turning the pot 90 degrees? It might be a month before I notice any change, and by then I won't know what to attribute it to.

Though my teenager is blessed with the power of speech, she struggles sometimes to articulate what she needs. Her stormy interior life can seem both too complex and too murky to communicate to me. Meanwhile, the very process of establishing her own identity requires her to pull away, expanding the distance between us so she can figure her own self out. Finding a language to bridge that distance has been a tricky process of trial and error.

Together, we try to negotiate a balance. How much nagging is just enough? Where is the line between providing her with enough autonomy to succeed on her own terms and providing a safety net to protect her from the more dangerous stumbles? Where does my care feel warm and comforting, and where does it stifle? The answers to these questions are fluid, ever-changing. And who's to say I'm ever getting it right?

Once upon a time, my daughter gave us PowerPoint presentations; a bullet-pointed guide to her heart's desire. Life was easier when making her happy was as simple as opening the door of our home a little wider, making room for someone new to love.

The kittens that showed up on a neighbor's back porch. The hyperactive mutt from the shelter, who came complete with a list of fears and neuroses as long as my arm. The guinea pigs that had to be adopted together because they were a bonded pair. And of course, a certain nervous hibiscus plant.

Maybe that was her plan all along. Here, Mum, let's bring home this plant. It will drive you crazy, and it will make you doubt your ability to properly care for it, but when it blooms? It'll knock your socks off.

And then you'll be ready for me.