Though it’s been 23 years since she became branded “the Servicer in Chief” – 20 years since a man famously stood up at a public forum and asked her, “How does it feel to be America’s premier blow-job queen?” – Monica Lewinsky was, until very recently, regularly laughed at as a walking sex gag. 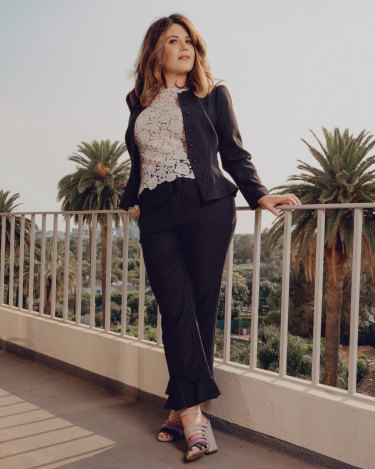 Lewinsky learned the hard way that to throw off a toxic label, you have to confront some hard truths.Credit:Ryan Pfluger/The New York Times

Even three years ago, at the height of the #metoo movement, feminist writer Hanna Roisin admitted to the co-host of the Slow Burn podcast, “The way we talked about her, the way we treated her, how blind we were to the power dynamics. And yet you and I still find it funny. Why is that?” (Far crueler was writer Nancy Friday who suggested a few years prior that as Lewinsky’s next career move, “She can rent out her mouth.”)

And yet just last week, Lewinsky, who has reinvented herself as a respected public speaker, called the last seven years when she was still being regularly pelted with cruel barbs, “nothing short of a fucking miracle”.

Much has been made about the psychologically boosting opportunity Lewinsky is now enjoying as producer on Ryan Murphy’s latest 10-part miniseries American Crime Series: Impeachment to tell her side of the story. (The sixth episode of the Binge series, which explores Lewinsky’s affair with then-American president Bill Clinton and his subsequent impeachment, dropped on Wednesday night.)

But, according to clinical psychologist Caroline Hunt, Lewinsky has made other choices in the years leading up to this that demonstrate how the rest of us can break free from roles we’ve been pigeon-holed into and reclaim our dignity and sanity, even as others try to keep us frozen in time.

“It can sort of feel like a bit of a release, that it’s not something that they need to pretend about anymore,” says Hunt about Lewinsky’s decision in the last few years to be unabashedly upfront about the mistakes she’s made – even the most humiliating ones.

That Lewinsky insisted that Murphy keep the scene in Impeachment in which she flashes a sliver of her G-string to Clinton in the Oval Office – just one of the choices she’s “not proud of” – is one of many examples.

And in what’s been called “one of the best, most courageous TED talks ever”, she spoke of listening to the taped conversations she had with one-time friend Linda Tripp in which she confessed her love of Clinton, to “my sometimes catty, sometimes churlish, sometimes silly self being cruel, unforgiving, uncouth; listen[ing] deeply, deeply ashamed to the worst version of myself, a self I don’t even recognise”. (“Not a day goes by that I’m not reminded of my mistake, and I regret that mistake deeply,” she said, of her relationship with Clinton.)

The moves have led to Lewinsky’s new role as a respected public speaker about the debilitating effects of being shamed, and an advocate for fighting cyberbullying. (She also co-produced the new documentary 15 Minutes of Shame, which debuted on Binge last week.)

And they mark a huge departure for Lewinsky, now 48, who had previously been “tiptoeing around my past”, and trying everything to escape it, including launching a failed handbag brand and moving to London. It didn’t work, and the stench of the poisonous perceptions that trailed in her wake in that time, Lewinsky has said, put off men and employers alike, leaving her to lose her dream of getting married and having kids and, for a long time, the ability to support herself.

It illustrates why the brutal owning up to one’s mistakes that may have formed the foundation for the roles we play – common ones people rail against include the “screw-up”, the “compliant one” and the “cautious one” – is an empowering move for anyone wanting to throw off the shackles, says Hunt, president of the Australian Clinical Psychology Association.

“It sort of stops the criticism a bit in its tracks,” she says. “So, what would the comeback be if somebody says, ‘Yes, I own up to it, I regret it’? Where do you go from that? Whereas if you don’t say that, then somebody could come back and say, ‘Well what bout your role in this, for example?’

“You have a choice. You can spend all your time ruminating about what you’ve done in the past and make yourself feel terrible about it” – an activity that frequently leads to depression – “or you can say ‘Nuh, I own up to that and I’m going to be future-focused. I’ve learned from that.’”

But do we have to wait, like Lewinsky did, for auspicious timing – for a time when the people who expect us to play a particular role in their life might be more likely to be receptive to a relationship dynamic overhaul?

Because Lewinsky’s reinvention and the praise she has begun to receive in the last few years has dovetailed with the #metoo movement and greater support for women, particularly those who’ve experienced abusive relationships and discrimination, than they had in the 1990s.

“We’re [also] savvier at things like psychology and [character] development and the other influences on how we respond to a situation,” says Dr Lauren Rosewarne, a pop culture expert at The University of Melbourne, adding that “the greater complexity of the pop culture we consume now” like true crime shows have provided pop culture consumers with a primer on psychological motivations for troubling behaviour.

“Horror films in the ’70s and ’80s could get away with a protagonist being a stabber or a serial killer, and that’s it. Now, audiences have the expectations that we know a bit of [the] psychological backstory as to why [they’ve] been traumatised like this.”

And this, says Rosewarne, has led to the rest of us possibly being less likely than in the 1990s to reduce people to a one-dimensional cliché.

“We’ve culturally [now] got the language to speak about mental health stuff, to be cognisant of friends going through tough times. The idea of being attuned to friends; what does depression look like? What is suicidal ideation? We have these skills now, even if we haven’t done psychology courses.”

But for Hunt, the question people need to ask themselves is not “When would be a good time to throw off the shackles of a role?” but rather, “How painful is it to remain in that role?”

“At any time, the danger is the possibility that the [other] person might see this as being a permanent rupture in the relationship, and be very angry and unforgiving,” says Hunt, adding that in many cases, “the other person actually quite likes having somebody who is [for example] quite compliant, who will do everything”.

But the option to remain in a dysfunctional role is often “crippling” for people.

Because, while the rest of us mightn’t have experienced the humiliation of being labelled “some little twirp” by pioneering feminist Betty Friedan, as Lewinsky was – or been driven to feeling “suicidal”, as she also was – the experience still often leads to depression.

But how can the rest of us, who lack the support of international television directors or a TED stage, convince others that they’ve never seen us for who we really are, or that we’ve changed from who we once were?

The first move, says Hunt, is to figure out the source of why we have played the role we have in our relationships in the first place. Often, she says, it’s the result of anxiety. For instance: that others won’t like us if we aren’t compliant. Therapy can get us to resolve these feelings, and assert our needs with others.

In other cases, people might want to ask themselves if the dysfunctional roles they play might have benefited them at one time.

“Sometimes being ‘the screw-up’ can be used as a distraction; ‘If I act like I’m a bit of a screw-up, then people won’t look and see the real me’, that sometimes happens,” says Hunt, about people who feel “unworthy in some way”. Others who have become worn down by being the “emotional caretakers” in their family or friendship group, she adds, might want to explore whether they’ve taken on the role because they desire being wanted and needed.

But, as Lewinsky – who at 35 was still dependent on her parents’ for financial support, and feeling lost without “a purpose” – has demonstrated, it’s never too late to change how you think about your past, which can radically change your present and future.

“It’s always possible to make a change if you’re actually wiling to,” says Hunt, adding she’s had clients who have wondered if they can break free from the role they’ve played after doing so for two decades or more. “It requires facing things that are difficult, and perseverance, but I don’t think there’s any evidence that there’s a point where you can’t change anymore.”

As Lewinsky wrote three years ago, “If I have learned anything since then [the Clinton scandal], it is that you cannot run away from who you are or from how you’ve been shaped by your experiences. Instead, you must integrate your past and present. As Salman Rushdie observed after the fatwa was issued against him, ‘Those who do not have power over the story that dominates their lives, power to retell it, rethink it, deconstruct it, joke about it, and change it as times change, truly are powerless, because they cannot think new thoughts.’”