NICKELODEON show Paw Patrol's range of toys has appeared in top toy lists across the planet for the past few years – the popularity of the pups is as strong as ever.

Read on to find out where you can get your hands on the 2022 Paw Patrol advent calendar, as well as other sought-after toys and merchandise.

What is Paw Patrol?

Paw Patrol focuses on a bunch of pups, as well as their human Ryder, who make sure all is well in the fictional city of Adventure Bay (and its surrounding areas).

There are 11 characters in the show, each one called upon from their doghouses to help in their pupmobiles.

The show has become the biggest title in children's entertainment, reportedly becoming more popular among toddlers than Mickey Mouse, Frozen and Elmo.

Where to buy the Paw Patrol 2022 advent calendar

What better way to lead up to the big day than offering a Paw Patrol fan the chance to build up a small collection of their favourite characters? Behind the windows are pups, animal pals and festive accessories for them all.

Using the calendar packaging they can create their own Christmas adventures and, should a bigger set arrive from Santa, these can all be incorporated into it.

The calendar is available from a range of retailers, including Boots, Amazon and Ocado. It's already out of stock at a few sites, so we'd recommend buying it while you can!

Where can I buy Paw Patrol toys in the UK?

But their popularity means they often sell out, particularly at peak times like Christmas.

We've found the biggest in-stock ranges online currently to be at retailers such as Selfridges, The Entertainer and Very.

What are the best Paw Patrol toys to buy?

There is a pretty extensive range of Paw Patrol items to buy, with something for all budgets, and some exclusive to certain retailers. here are our favourites: 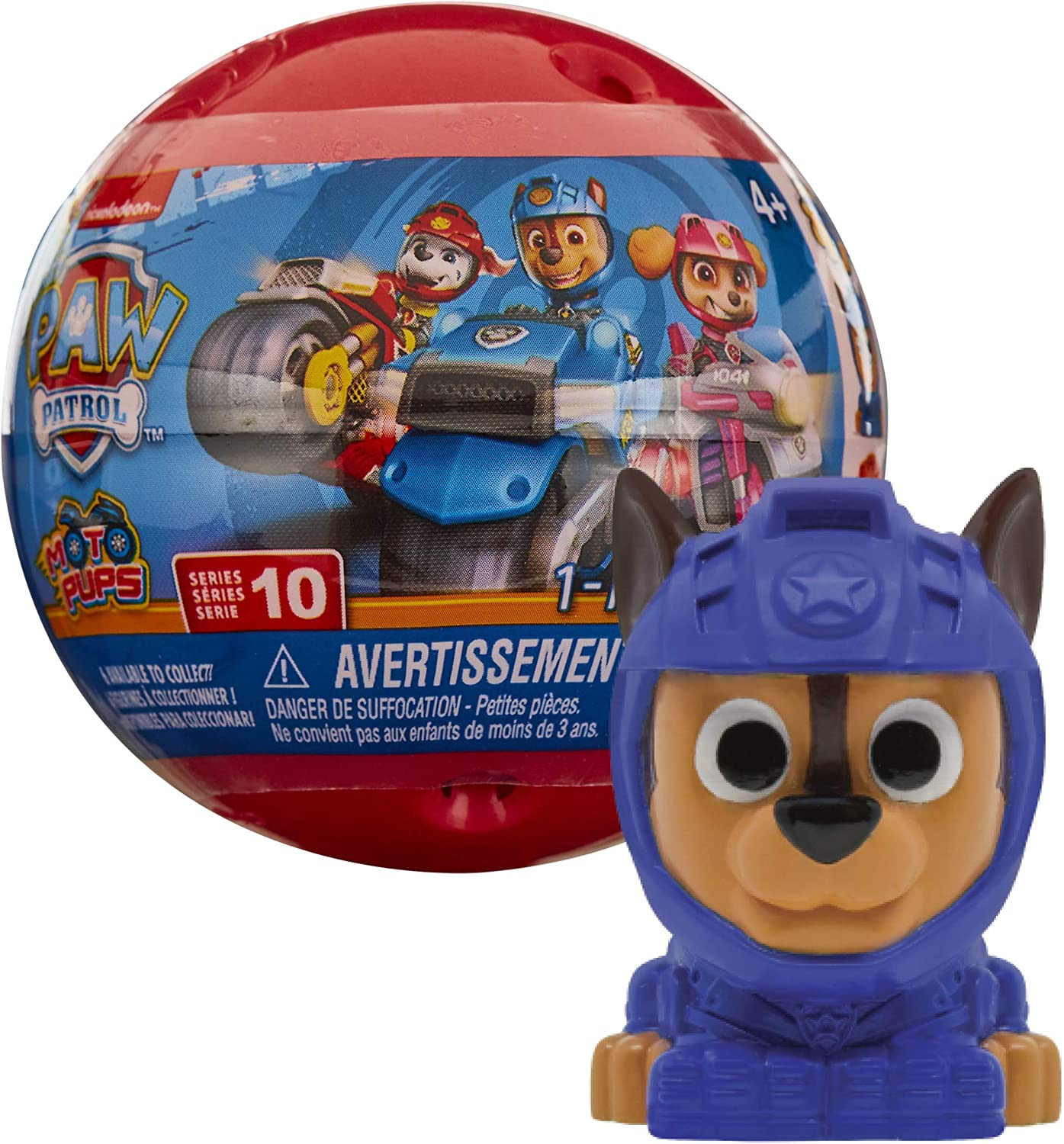 You can't be certain which character you’ll come across inside, but these Mash Ems are highly collectable and “swappable” between fans of the canines. You can twist and squish them, and kids can create their favourite TV scenes.

There are six unique characters to collect, and they're available from retailers including Amazon, Wilko and Hamleys, as well as some supermarkets. 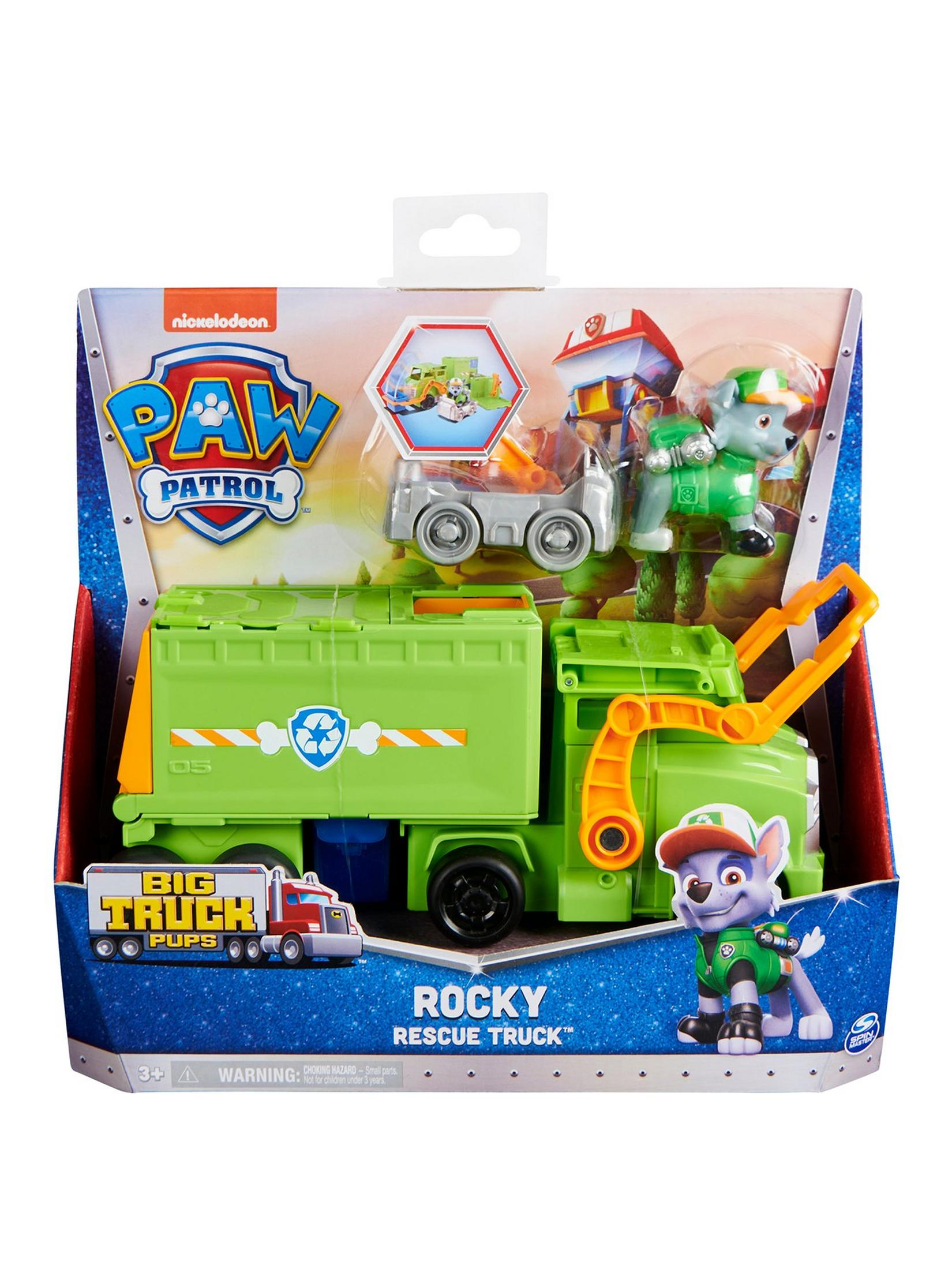 In the show, Rocky, Zuma, Marshall and Skye each have their own emergency vehicle to lend a hand when trouble arrives.

Each one of these trucks has moveable parts and a place for the included character to sit and take control of the mission at hand.

They're selling fast across many online outlets and in-store stocks are low, but we’ve found some at Very for £16.99. 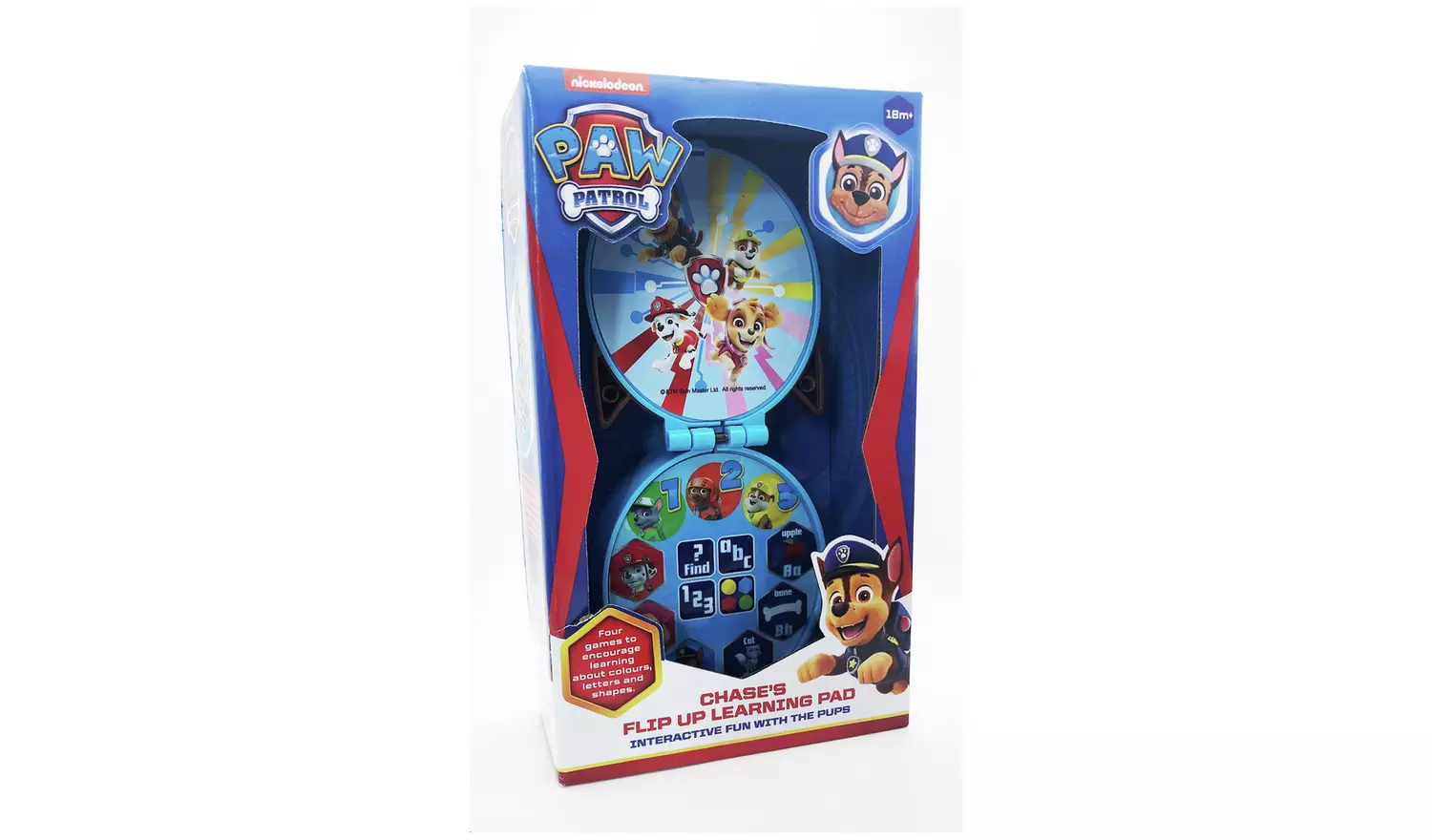 This electronic activity centre has four activities inside for Paw Patrol fans to get involved with. Lift up the lid of the smart pad, flip up the lid and reveal question master Ryder, making learning fun.

He’ll quiz kids about colours, numbers, shapes and objects. The touch-sensitive screen makes exploration easy to follow, with the activity buttons lighting up. 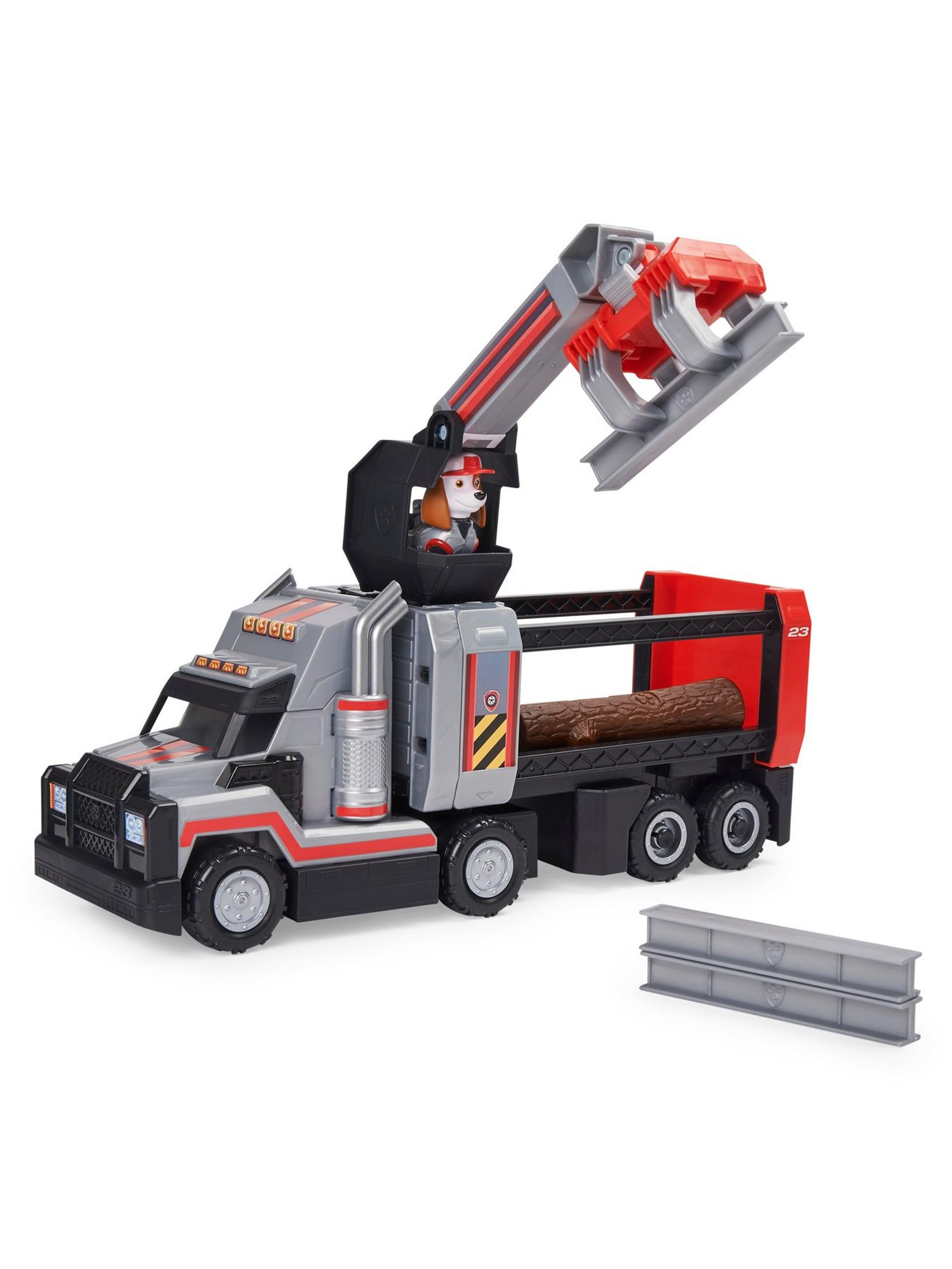 The latest member of the rescue crew is Al, and he arrives on the scene with this impressive Deluxe Big Truck. It is a large-scale logging truck of impressive proportions with a rising control pod, an extendable logging crane and a locking claw.

Open up the truck’s cab roof so Al can get on board to start his race to the rescue. Upon arrival at the scene, get him into action with the 360° rotating pod.

This is one of the hottest toys in Paw Patrol's 2022 range, so seeing it with an £11 discount at Very is certainly a bonus. 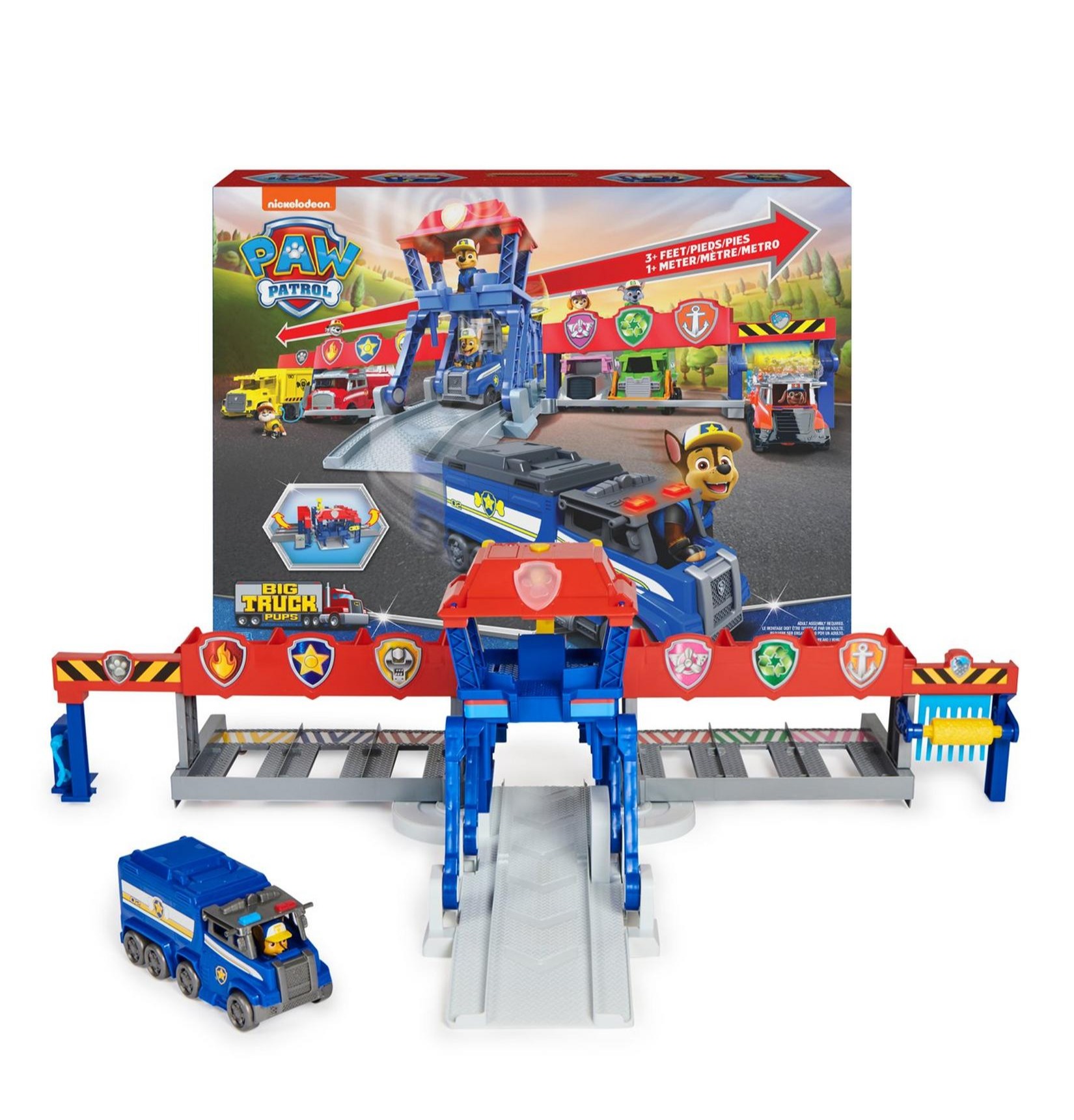 Each year there is that one big item in the Paw Patrol toy range and this one, while certainly not cheap, is the first big set we've seen for under £100 for a few years.

There are lights and sounds on board and it transforms into a playset over 3 feet wide to make enough room for Chase and the rest of the pups.

When the set is in rescue mode you can put Chase in his truck and stop by the tune-up station, get a fill-up, and take yourself to the carwash. When you’re done, the set will launch your crew off into their next mission. It is one impressive set. 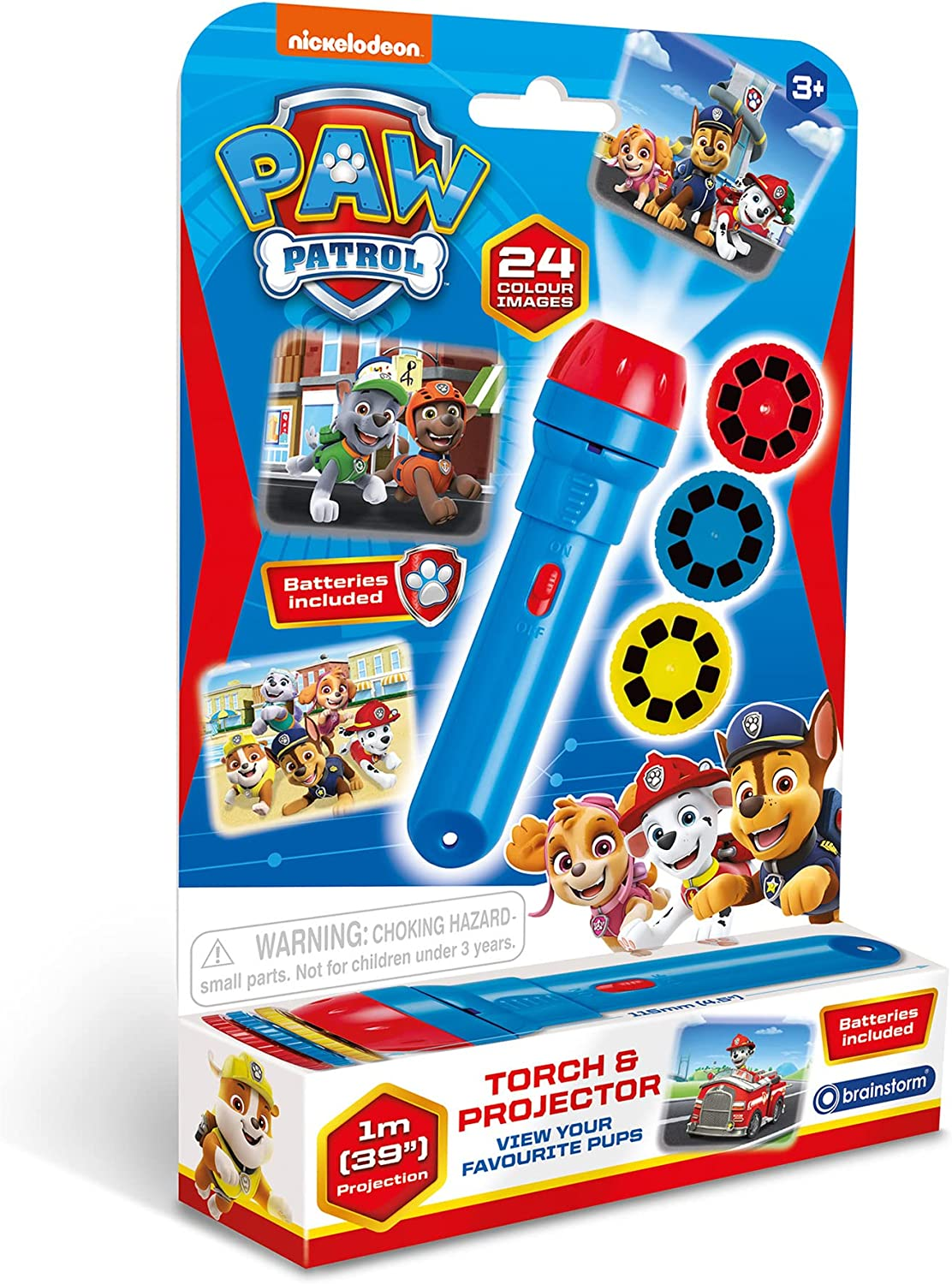 Ideal for sleepovers, this dual-action light-up gadget has three discs to insert that’ll project 24 colourful characters from the show onto your ceiling or wall.

It's easy to use, has loads of storytelling fun for Paw Patrol fans and you can revert it to a normal torch if you need one. 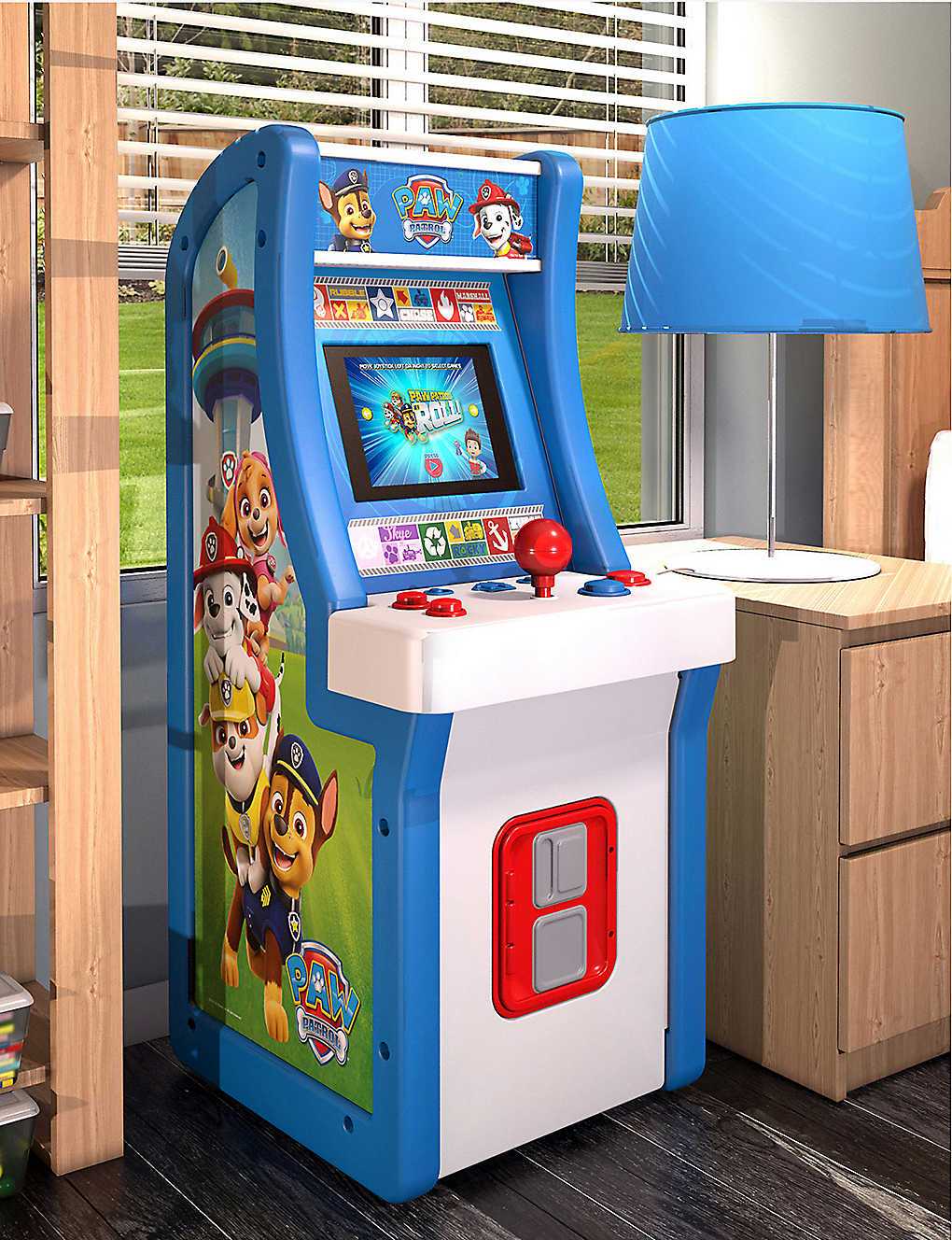 This is certainly in the big gift category but it has to be the ultimate Paw Patrol plaything we have seen. Standing 36 inches tall it is a sturdy machine but light enough to move around with ease. It's the ideal addition to their room, in the family game room, or even to create a kiddie corner at home.

With no assembly required, the machine is loaded with three Paw Patrol games and arrives along with a matching stool, that can be stored in the compartment at the back of the machine. 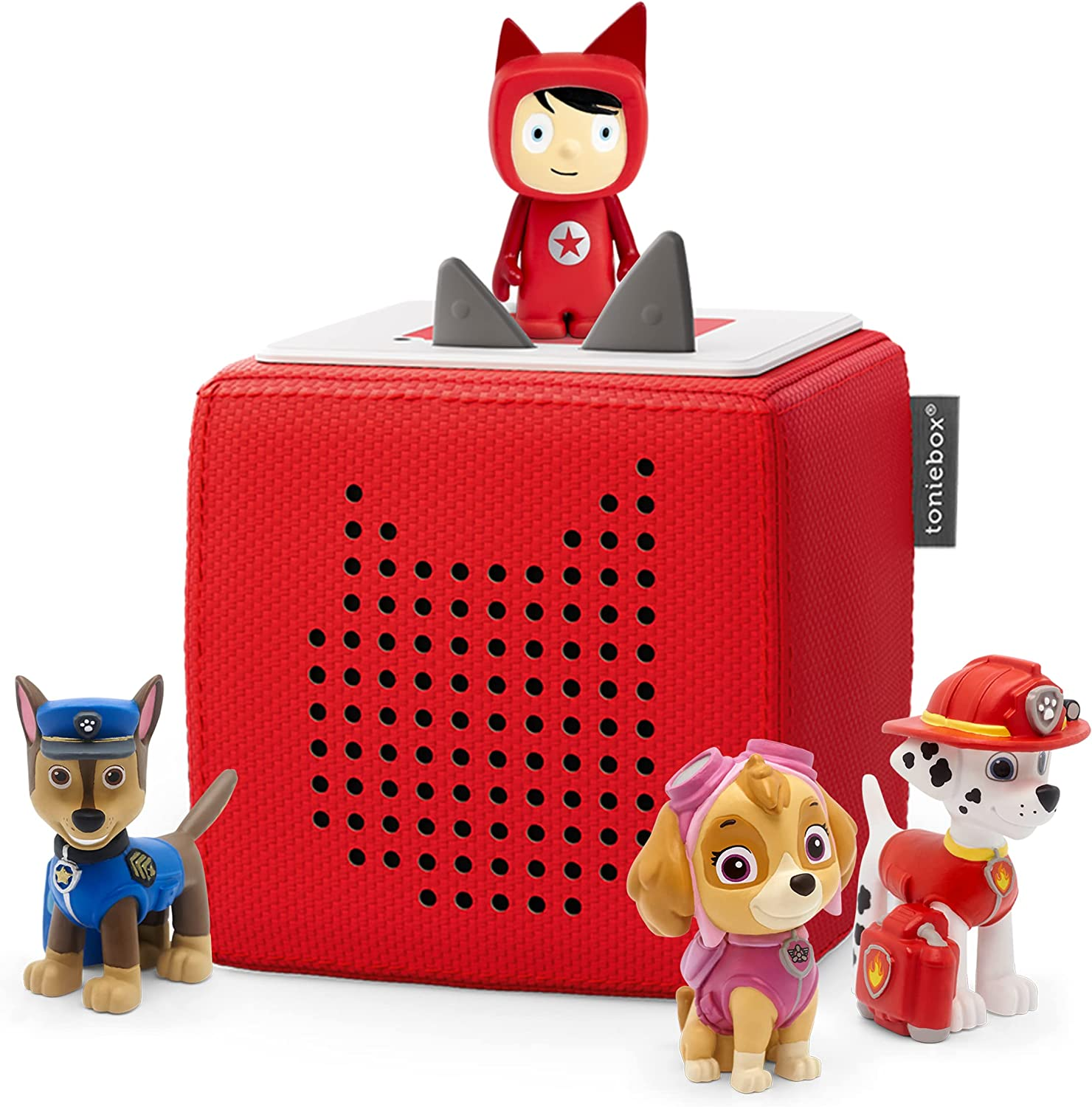 Place one of your characters at the top of this box and it’ll start a story relevant to the character who sits there. This breakthrough storytelling box is offered as a Paw Patrol special and has three of the characters.

Chase, Skye and Marshall will join you on this adventure and there are three other Paw Patrol characters to collect in the Tonie range. 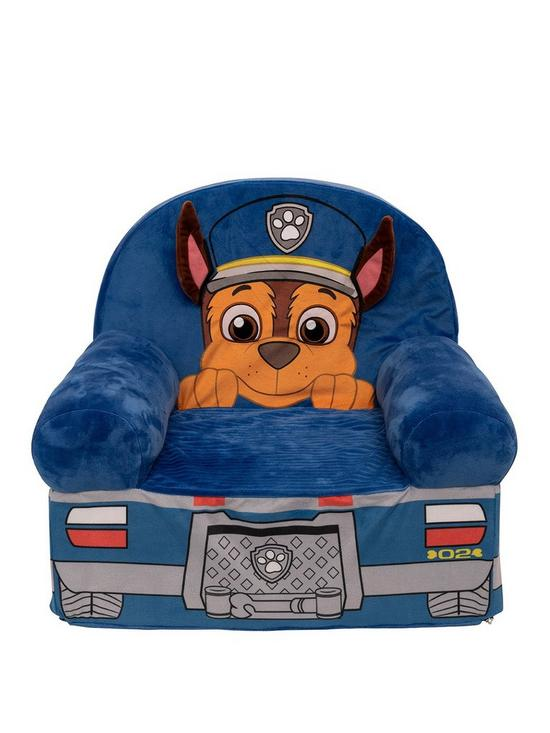 Your Paw Patrol fans will be sitting pretty and superbly comfy in these Chase and Skye plush seats.

These foam-filled seats are ideal for fans to get ready for their favourite show. Suitable for those of 3+ the chairs will no doubt take pride of place in their Paw Patrol empire of playthings. 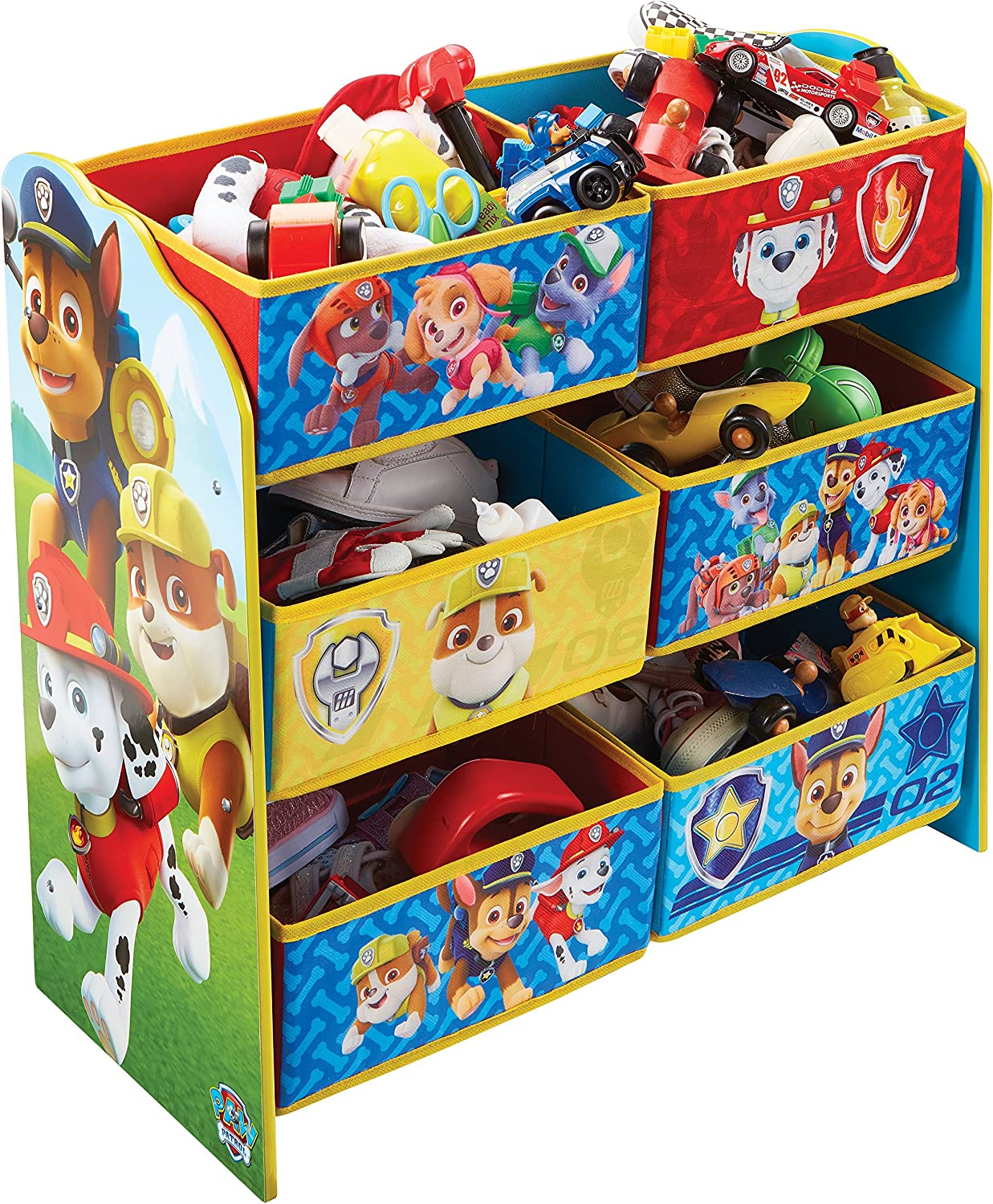 With an ever-increasing collection of Paw Patrol toys and other playthings around the place, an incentive to clear up is always welcomed — and here come Paw Patrol to the rescue.

A six-drawer toy tidy that’s super colourful and bright, this is an item that’s a must for any fan of Paw Patrol and tidying up.

What is the most popular Paw Patrol character?

With 11 characters on the scene, it's a tough call, but most of the merchandise and toys are centred around Chase and Skye, the leaders of the doggie rescue pack.

Where can I watch Paw Patrol?

The show is available widely across Netflix, YouTube and Channel 5, with Paw Patrol the Movie also streaming on Amazon for a fiver.