Jim Carrey was in makeup for so long during filming for The Grinch that a CIA operative had teach him how to endure torture.

While the 2000 film is a firm Christmas favourite in households across the world, it was a rather gruelling feat for the now 59-year-old actor, who was in makeup for upwards of 800 hours in total.

"The makeup was like being buried alive every day," he told chat show host Graham Norton. "The first day was eight and a half hours – I went back to my trailer and put my leg through the wall.

"I told Ron Howard I couldn't do the movie and then Brian Grazer came in and being the 'Fix It' man, came up with a brilliant idea which was to hire a gentleman who is trained to to teach CIA operatives how to endure torture.

"'He came in and said the trick is to eat everything you see, and if you're freaking out and you start to spiral downward, turn the television on, change your pattern, have someone you know come up and smack you in the head.

"You know, punch yourself in the leg or smoke as much as you possibly can.

"I had to sit through that makeup 100 times and do you know what got me through? The Bee Gees." 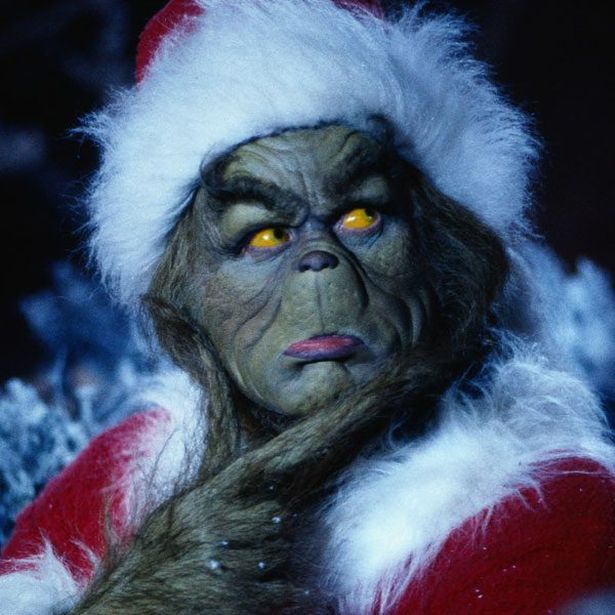 Despite the torture, Rick Baker and Gail Ryan won an Oscar for Achievement in Makeup for their work at the 73rd Annual Academy Awards on March 25, 2001.

Ron Howard’s adaptation of the Dr Seuss story 'How the Grinch Stole Christmas' was released way back in November 2000, earning an impressive £263m at the global box office.

In the film, the Grinch seeks to ruin Christmas for all of Whoville by stealing all of its material elements.

Naturally, the whole thing resolves in a slushy moment of realisation that Christmas is more about feelings than things.

Interestingly, Jack Nicholson was in the frame to play the lead role in The Grinch before Jim Carrey was cast.

As with any blockbuster movie, there were many big names in the mix to take on the lead role. But in this case, it was practically a contractual necessity.

One of the conditions laid out by Dr Seuss’s widow, Audrey Geisel, for passing on the film rights was that "any actor submitted for the Grinch must be of comparable stature to Jack Nicholson, Jim Carrey, Robin Williams and Dustin Hoffman".

Of course, one of the prerequisites of making a classic Christmas film is to have an adorable child at the centre of it all, whether it’s Miracle on 34th Street or Home Alone.

That was certainly something The Grinch had, in the shape of Cindy Lou Who – just about the only resident of Whoville who could think beyond commercialism and shiny things.

The character was played by seven-year-old Taylor Momsen, who had been acting professionally since the age of three.

Momsen’s acting career continued sporadically after The Grinch but, in 2009, she was signed to a record label as the lead singer of rock band The Pretty Reckless.

The band has achieved solid success, scoring two top 40 singles in the UK – most famously 2010’s Make Me Wanna Die – and two albums in the UK top 10.

As for other famous faces – or voices – in the film, we have the actor Frank Welker playing the Grinch’s only real companion, his dog Max.

The canine companion doesn’t speak, but his barks and noises were provided by Welker, who is most famous for being the original voice of Fred in the Scooby-Doo films and TV shows.

Mini-Me actor Verne Troyer is a member of the Whoville band, while Deep Roy – who played the Oompa Loompas in Tim Burton’s Charlie and the Chocolate Factory – is briefly glimpsed as a clerk in the town’s post office.

Another notable cameo among the residents of Whoville is Bryce Dallas Howard, credited as 'Surprised Who'.

Bryce is the daughter of director Ron Howard and had previously made cameos in his movies Parenthood and Apollo 13 as a teenager.

The director himself makes an uncredited appearance as a townsperson, too.

Stay up to date with all the latest news and gossip over the festive season by signing up to OK!'s daily celebrity newsletter.