Cracking open a tinned cocktail on the tube may be frowned upon, but one woman did it in style by pouring her beverage into a glass.

Communications director, Mark Locke, 45 from Scotland, captured the impressive moment a glamorous woman sipped on what appeared to be a pink G&T from a glass on the Northern Line.

His snap has since gone viral on Twitter, receiving over 50,000 likes and 13,000 retweets, since he tweeted: ‘To the lady drinking a pink gin and tonic *from a glass* on the Northern line, I salute you. Classy.’

The image captured a mystery woman with a glass in one hand, dressed in a black roll neck, black trousers, sunglasses, socks and a glitzy pair of jewelled flip flops.

And Twitter users were impressed, hailing the unnamed woman as a ‘formidable queen’, while another gushed, ‘my hero’. 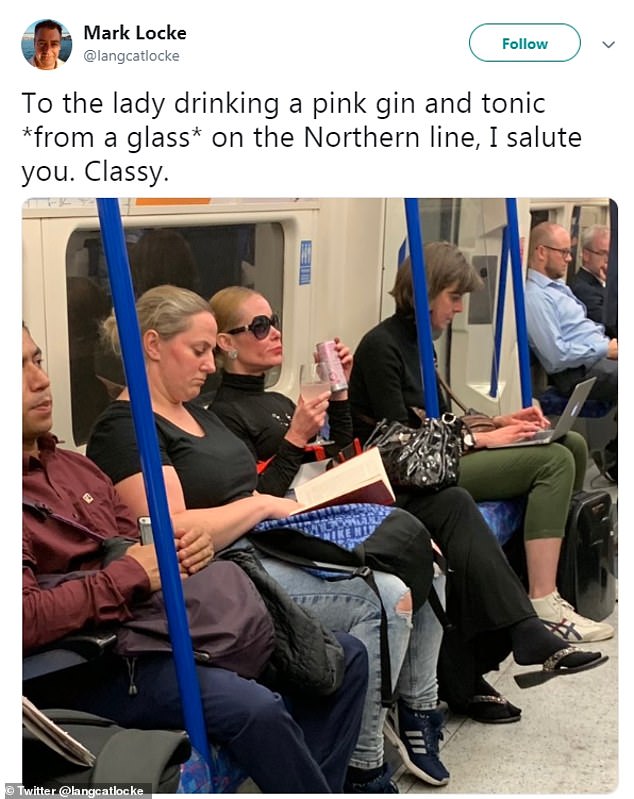 Scottish director, Mark Locke, 45, shared a photo of an unnamed woman drinking pink gin and tonic from a glass on the London Underground, which has since gone viral on Twitter

Another Twitter user wrote: ‘I love her in every way. The turtleneck. The glasses. The sandals. The energy I yearn for.’

A separate fan mused: ‘When people ask me where I want to be in 10 years times, I’m just going to show them this picture.’

‘The unflappable energy radiating off the photo is invigorating. I feel empowered to live my most fabulous life?’ one said.

On individual urged her to become Britain’s next Prime Minister.

They wrote: ‘Honestly I’ve looked at this so many times and decided she should be the new PM. Because a woman who drinks a G&T from a glass on the tube is someone I can support.’ 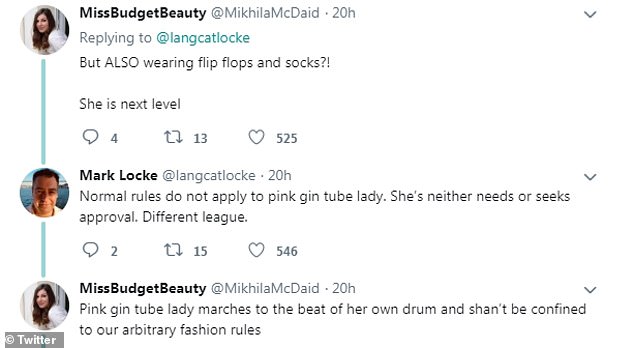 However, this might not be the most bright idea, given that Shadow Home Secretary Diane Abbott was snapped on the tube drinking a canned M&S Mojito back in April, and later apologised.

Transport for London introduced an alcohol ban on all public transport in the capital in 2008.

She did receive an outpouring of support on social media, however, with commenters saying that ‘we’ve all done it’. 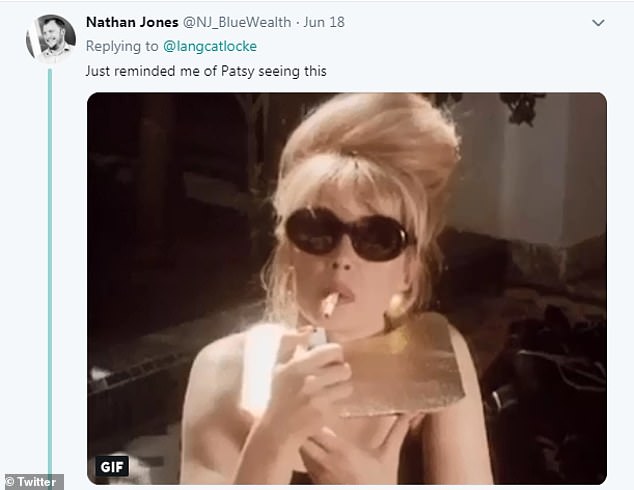 Some likened the female to Joanna Lumley’s character Patsy Stone in Absolutely Fabulous, who dressed elegantly, was rarely without her designer sunglasses, and always had a drink in hand 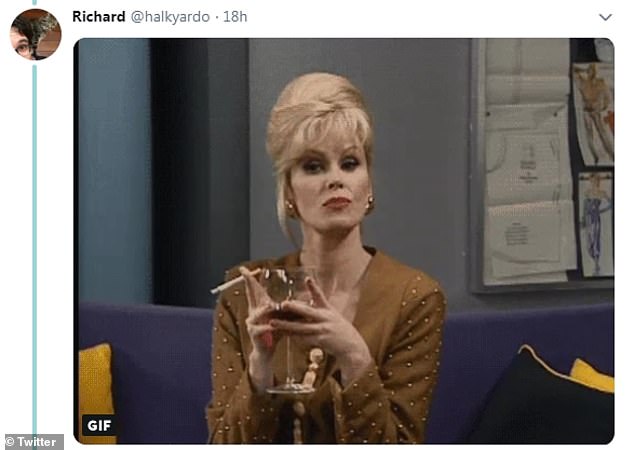 Meanwhile, the post about the pink G&T drinker saw fans draw comparison between her and Joanna Lumley’s character, Patsy Stone, in Absolutely Fabulous.

One wrote: ‘Just reminded me of Patsy seeing this’, another added: ‘It’s Patsy Stone!’

A string of memes of the figure in the series were shared likening the female to Patsy, as well as Lady Gaga and Sarah Paulson’s American Horror Story character Cordelia Goode. 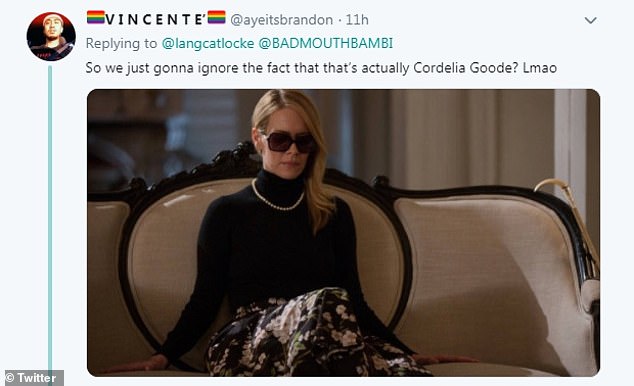 Some Twitter users likened the woman to Cordelia Goode in the American Horror Story, who is played by award-winning actress Sarah Paulson 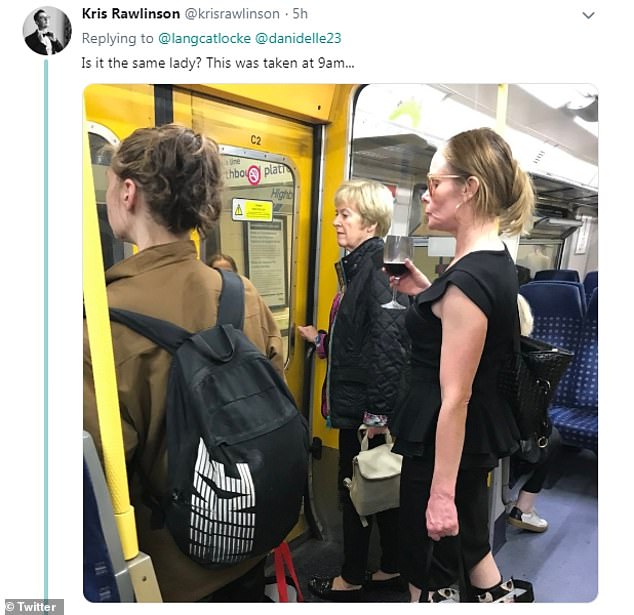 Mark’s tweet encouraged others to share images they had taken of a woman sipping on a drink from a glass on their separate journeys, asking if it was the same person

Mark’s tweet encouraged others to share images of a woman drinking alcohol on the tube in the same way, who they think could be the same female.

Alongside a different image, one wrote: ‘Pretty sure that’s the same person I saw drinking wine on the Victoria Line last week.’

Another shared: ‘Is it the same lady? This was taken at 9am.’

However, the post sparked further speculation over which Underground line the female was travelling on. 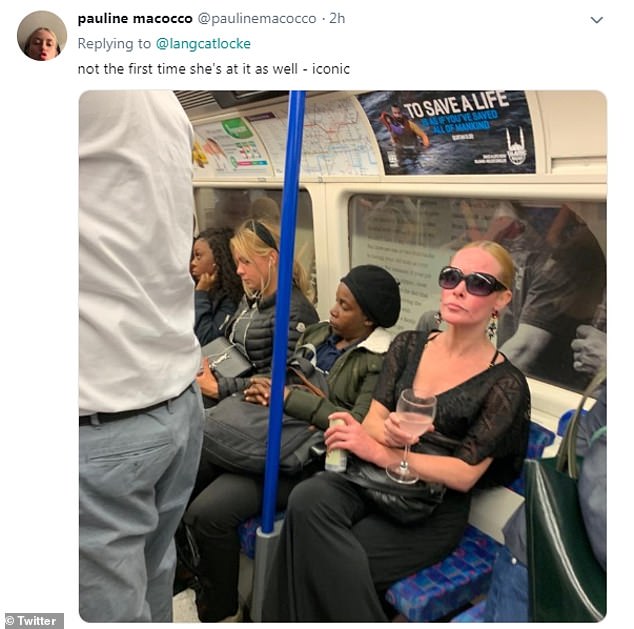 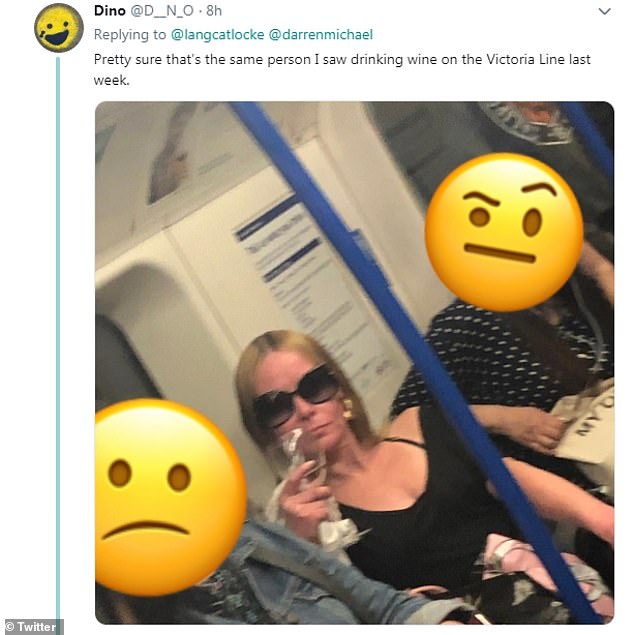 A separate Twitter user insisted they had seen the same woman sipping from her glass on the Victoria line last week, and added their snap to Mark’s thread

Some thought the rails in the carriage were blue to match the Victoria line, although others thought it could be the Piccadilly or Northern line.

Another assumed: ‘It’s the Victoria line I can tell from the door buttons – sad I know the colour.’

Mark deduced it may have been on the Northern Line.

He replied: ‘So as I wasn’t on the Piccadilly line, I’m going with the Northern line. Final answer.

‘Well that’s remarkable, as I wasn’t on the Victoria line. It’s a crazy mixed up world.’