Woman who had 38P breasts covered in cysts and cuts drops 21 cup sizes after raising £8,000 for reduction surgery and says she can finally ‘live a normal active life’

A wedding photographer whose size P breasts were the ‘biggest doctors had ever seen’ has revealed how she was forced to crowdfund £8,000 to go under the knife and drop 21 cup sizes after the NHS rejected her for surgery because her BMI was too high.

Laura Howes, 28, from Seghill, Tyne and Wear,  had a gruelling four hour operation, where the surgeon needed a nurse’s help to hold her four-stone breasts in place while drawing on pre-op markings in pen.

Despite having suffered from severe back pain and wounds from her breasts bumping into things, she claims she was refused surgery on the NHS due to her BMI and even when she lost weight she was still not approved. 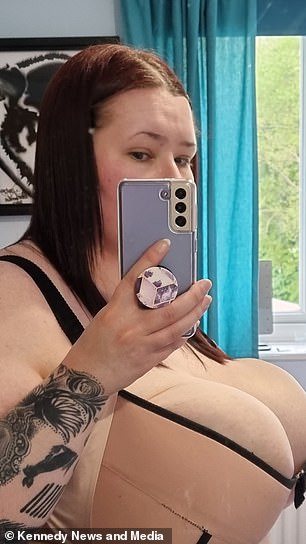 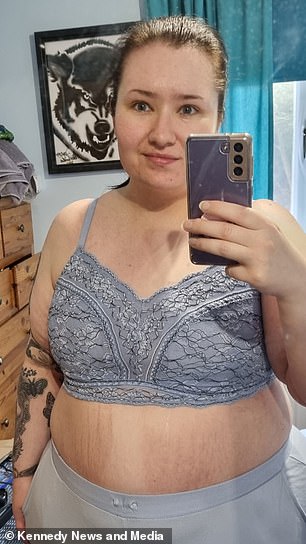 Laura Howes, 28, from Seghill, Tyne and Wear, had a gruelling four hour operation, where the surgeon needed a nurse’s help to hold her four-stone breasts in place while drawing on pre-op markings in pen. Left before surgery

Delighted Laura has even been able to wear a pretty, lacey bralette for the first time in her life.

‘I’ve lost a stone and a half just of boob, it’s really weird. I’ve gone down, including double letters, 21 cup sizes. I’m now a 36E,’ she explained.

‘I’ve read a lot of information online that says “patients are satisfied with dropping two or three cup sizes” – I dropped 21 so I deserve some bragging rights.

‘The surgeon who did my operation said I’d got the biggest boobs he’d ever seen. He told me I’m not obese – something I’ve been told my entire life – but it was just boob.

Thrilled Laura no longer needs to stuff her 36P breasts into a 38K bra as she’s dropped from a P cup to a size E.

Still tender while recovering from the op, Laura said it’s ‘the best decision she ever made’ and she’s looking forward to being able to sit and stand comfortably and begin training for a marathon. 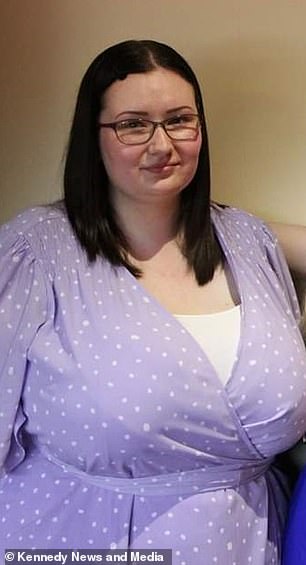 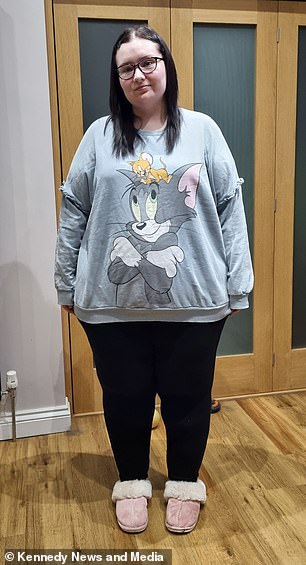 Despite having suffered from severe back pain and wounds from her breasts bumping into things, she claims she was refused surgery on the NHS due to her BMI and even when she lost weight she was still not approved. Left before surgery, right now

‘I felt validated when he said that as I used to think “am I exaggerating? Am I being too dramatic?”

‘Having this operation is the best decision I’ve ever made – it’s been life-changing.

‘Before the surgery I was so miserable and beat myself up about things I couldn’t do and the way I looked all the time.

‘Recovery can definitely be rough, as is recovery from any surgery, but even on my worst days I feel exponentially better than I ever did with my 36Ps. 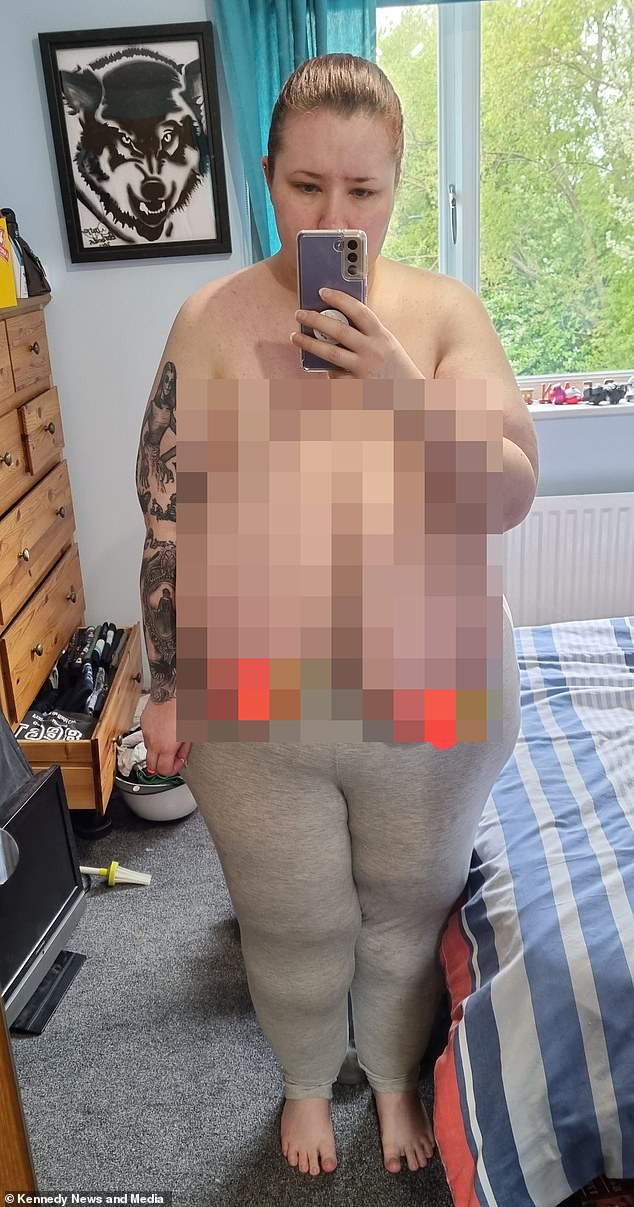 ‘I finally get to start being myself and living a normal, active life and I can’t wait to see what the rest of my life will bring.’

After enduring years of severe back pain, sciatica and permanent dents in her shoulders from wearing a too-small bra Laura said those issues have disappeared overnight.

Laura also dealt with including cysts, cuts, friction sores and rashes that constantly bled and became infected have also cleared up.

Now Laura, who lives with 23-year-old supermarket worker boyfriend Sean Peacock, is able to stand and sit comfortably, and shower without ‘swinging’ her boobs out of the way.

Laura said: ‘Having the surgery was a physical and emotional weight off my chest.

‘When I was in recovery and sat up I looked down and there was no boob on my lap, that was really nice.

‘Before the operation I had sciatica but afterwards it was completely gone, I’m so glad about that. The vast majority of the boob tissue where I had cysts has been chopped off.

‘Now I can stand up straight and I can sit normally too. I can also now sit a sensible closeness to the dining table.

‘My boobs don’t rest on the dining table anymore and they don’t pull the tablecloth towards me when we’re playing board games and I have to reach over to move something.

‘When I shower I don’t have to swing my boobs out of the way anymore.

After initially being rejected for surgery, Laura visited a different doctor who claimed it would be ‘physically impossible’ for her to reach the goal and filed an extenuating circumstances letter. She is pictured holding up her 38K bra 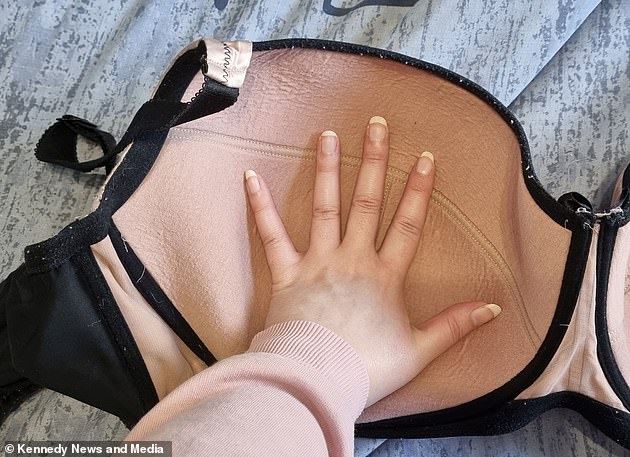 Laura was unable to lose the suggested seven stone weight rapidly enough due to her breasts causing her significant pain, and when lockdown began she was unable to go to the gym and her weight loss journey stopped. Pictured her 38K bra, which is five sizes too small

‘I can also go for gentle jogs now and have a dream of completing a Disneyland marathon in fancy dress.

‘I chatted to my friend about it but I always held back from getting too excited about it in my head because I never saw my boobs not being a problem.

‘I genuinely didn’t think I’d be able to actually run without it immediately hurting too much to enjoy the experience.

‘Finding a cute costume to accommodate my boobs would have cost a fortune too because I’d have to get one custom made.

‘But now I’m just your average, plus-size, slightly pear-shaped girl who should, in theory, be able to find cute stuff to wear. 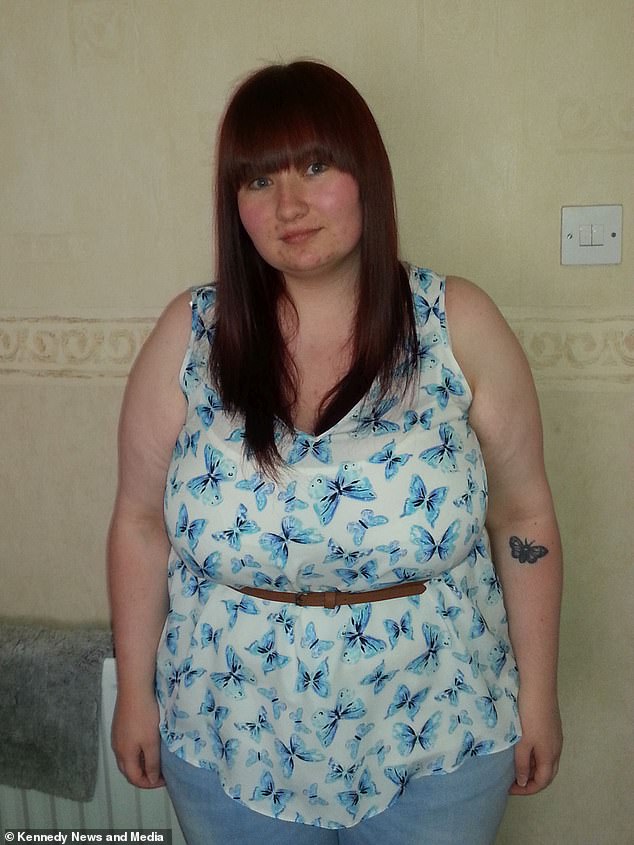 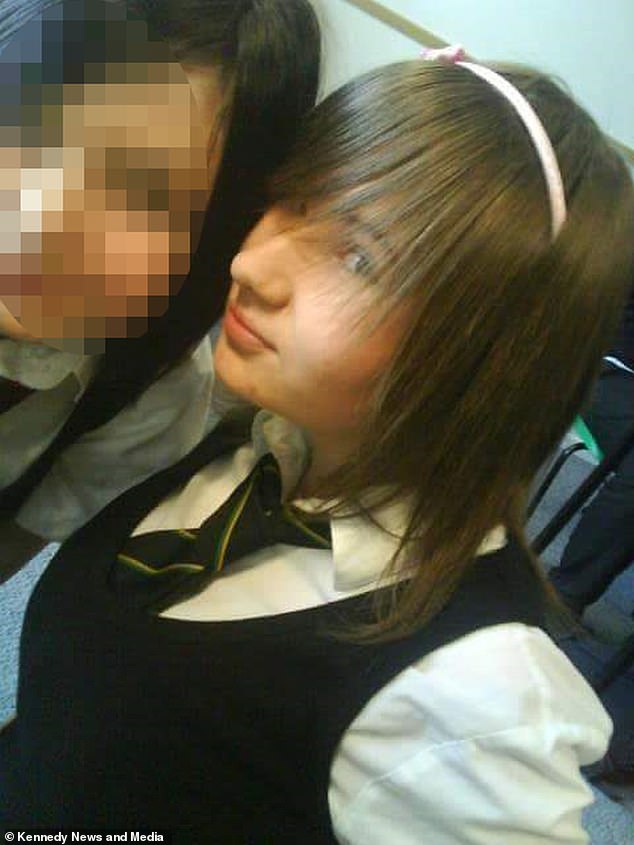 ‘My boobs should be small enough that I can buy a sports bra that fits and will hold them in place instead of hurting me.’

Laura opted to have the surgery privately after claiming she was initially refused NHS funding due to not meeting the 27 BMI criteria.

BMI – or Body Mass Index -is  calculated by dividing your weight in kilograms by your height in metres, and dividing the answer by your height again. Typically 25 or over is ‘overweight’ and 30 or more is categorised as ‘obese’. However it’s been largely criticised in recent years as an outdated and ineffective way to measure health.

As her BMI was over 27, Laura embarked on a two-year health and fitness plan – working with a dietician and trainer to drop the pounds in 2019 – she was unable to lose the suggested seven stone weight rapidly enough. 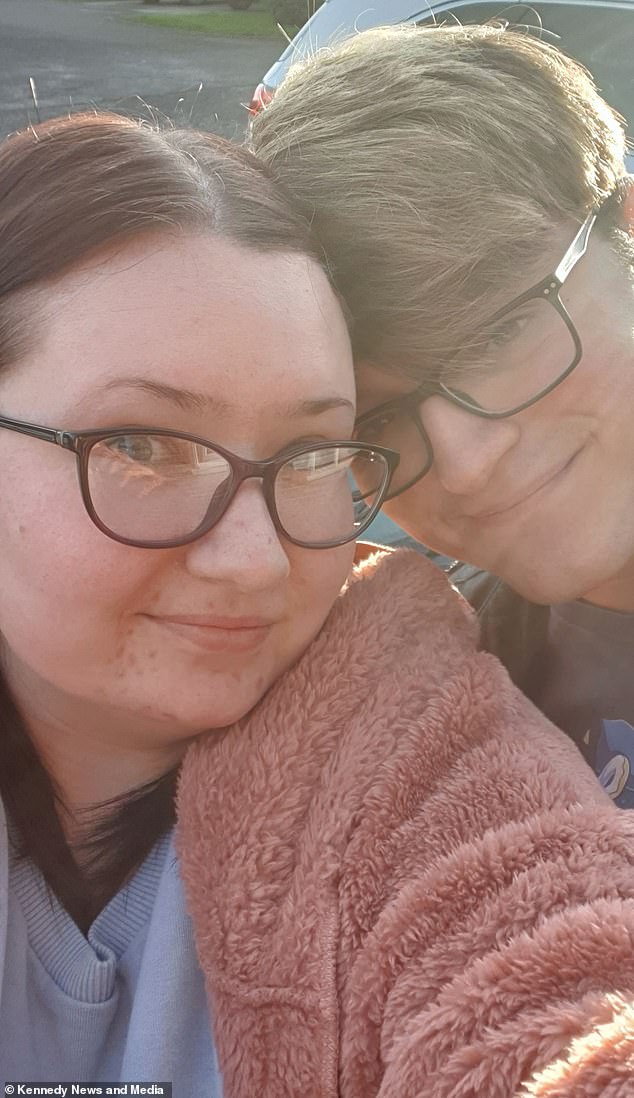 Laura, who lives with 23-year-old supermarket worker boyfriend Sean Peacock (pictured togetehr) approached her GP two years ago to see if she could get a reduction on the NHS – but has been suffering with breast-related issues since she hit puberty

This was due to her breasts causing her significant pain when she tried to work out.

When Covid-19 hit she was unable to work out in the gym and her weight loss journey ground to a halt.

At her wits end, 5ft 4in Laura, who weighed 22st, visited a different sympathetic doctor who she claims calculated it would be ‘physically impossible’ for her to reach the goal and filed an extenuating circumstances letter.

However Laura says she was crushed to learn she’d been rejected again and says she was told there would only be a ‘small chance’ the board would reconsider if she underwent bariatric surgery. 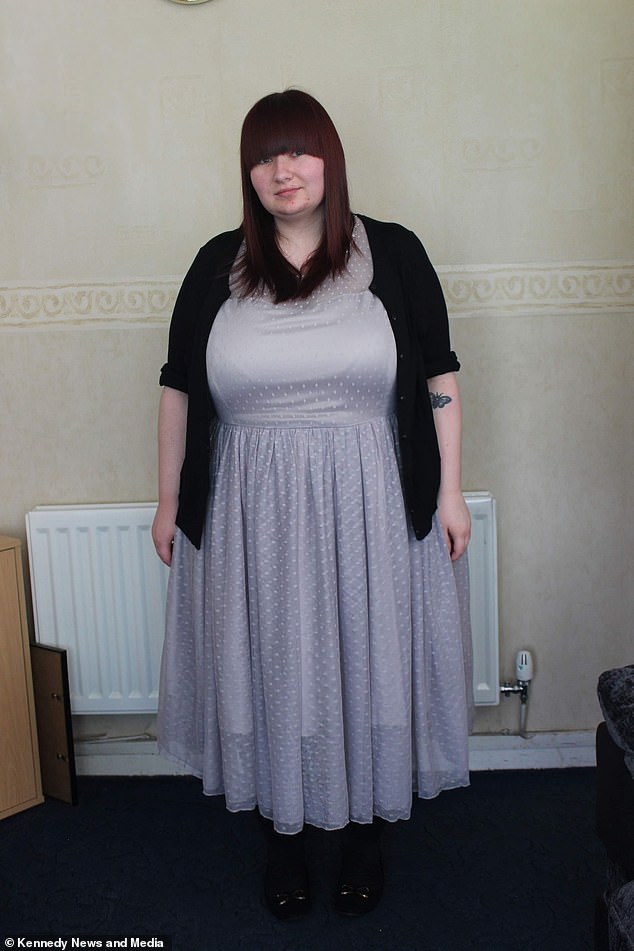 Laura is pictured in 2016, aged 22, celebrating her graduation in a loose fitting dress

Determined to live life to the fullest, and not simply ‘exist’ in constant pain, Laura set up a fundraising page to get the operation done privately in the UK.

NHS South Tyneside Clinical Commissioning Group said the CCG bases its criteria for a number of surgical procedures on the ‘best available scientific evidence’, enabling them to focus resources on people who are ‘most likely to benefit from an intervention’.

Laura said: ‘I felt really overwhelmed in a really nice way when I reached my fundraising target. You always read stuff online about people being nasty, but clearly not everyone is like that.

Can you get breast reduction surgery on the NHS? Size of a woman’s breasts, their weight, their age, whether they smoke, will be considered before surgery is offered

Breast reduction surgery is done to reduce the size and weight of a woman’s breasts, and involves removing fat, tissue and skin from the chest.

Genes, hormones and body shape and size may determine how large a woman’s breasts are – usually they are in proportion to the rest of the body but some women’s may be exceptionally large.

The NHS will not usually do a breast reduction for cosmetic reasons.

However, it may be considered if a women is experiencing effects like backache, neck or shoulder pain, rashes or skin infections beneath the breasts, or psychological distress.

The NHS may also consider the size of a woman’s breasts, their weight, their age, whether they smoke, and whether other solutions have been tried.

And local funding availability also plays a role – different NHS boards around the country have different criteria so women living in some areas may be more able to get the surgery than those in others.

‘Even those who couldn’t afford to donate sent messages saying ‘I can’t afford to give you anything but wanted to wish you luck’.

‘People are really nice. I’m so thankful, I wouldn’t be here in this position without them.’

Laura, who used to despise clothes shopping, now can’t wait to storm the shops with pals and snap-up pretty and affordable bras and tops to accommodate her new slimmer frame.

Laura said: ‘I usually hate shopping and would order multiple sizes from online stores and send items back if they didn’t fit. I never wanted to go into changing rooms.

‘So many friends have offered to take me bra shopping – it’s kind of a big deal.

‘I just really want to go for a proper bra fitting and get something little, pretty, comfy and that fits.

Laura said she hopes her story serves as inspiration for other women who find themselves in a similar situation she did earlier this year – urging them not to be afraid to ask for help.

Laura said: ‘My advice to anyone in a similar situation is to just keep going. I would encourage people to keep trying the NHS [route] as they are fantastic.

‘Don’t be scared to ask for help. It’s nothing to be ashamed of, it’s not the easy way out and you’re not a bad person – people do want to help.’

An NHS South Tyneside Clinical Commissioning Group spokesman said: ‘We are unable to comment on individual patients, but we can confirm that the CCG bases its criteria for a number of surgical procedures on the best available scientific evidence.

‘This enables us to focus our resources on people who are most likely to benefit from an intervention, and to avoid interventions when they are likely to be ineffective, or worse still dangerous.

‘We recognise that there are occasionally situations that do not fit the usual criteria, and individual funding requests can be made for such exceptional situations.

‘In cases where BMI is an inappropriate way to judge whether an individual has reached optimum lean body weight, alternative validated measurements can be provided to support such requests.

‘We advise that anyone in a similar situation should continue to work with their GP.’