Eczema sufferer who developed an infection that made it too painful to shower or sleep reveals how £7.99 cream helped clear her skin in weeks

A woman who spent last Christmas with a skin infection that made it too painful to shower or sleep is now hoping to make up for lost time and have fun over the festive period thanks to an ‘unbelievable’ simple fix.

Anisha Joshi, 24, from Telford, Shropshire, was in agony when red and sore blotches appeared across her face overnight in November 2021 and became infected.

The executive assistant, who has suffered from eczema since birth, said her condition got progressively worse until she was unable to shower or sleep and was anxious about leaving the house.

After a series of treatments, including steroids and UVB therapy, the use of a £7.99 store-bought cream proved the turning point for Anisha’s skin in July this year – and she is now ‘hoping to have fun’ again this Christmas. 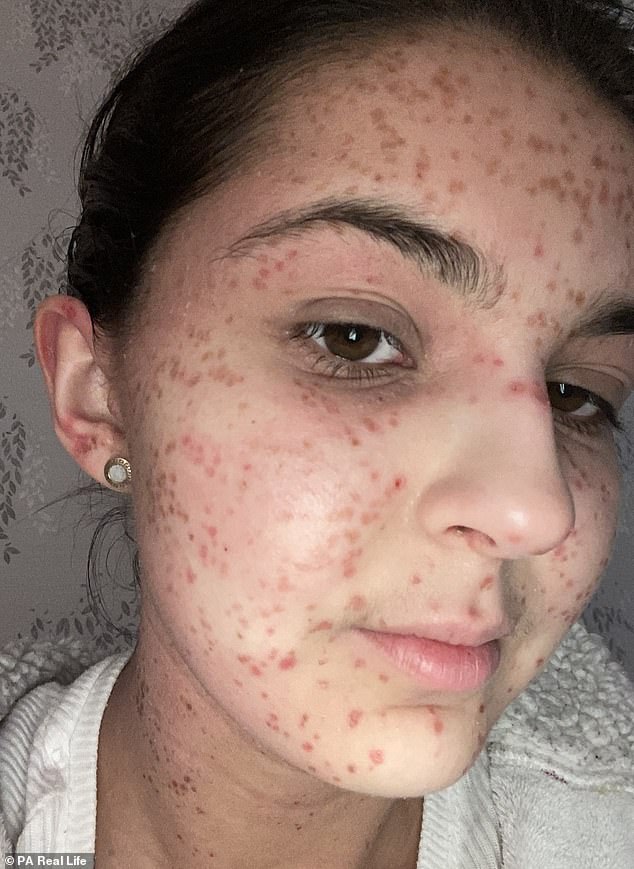 Anisha, who lives with her boyfriend, Nathan Harding, 24, who works at a college, said: ‘My skin was so bad to the point where it was giving me anxiety.

‘I didn’t want to go out socialising because I hated the thought of people looking at me.’

She added: ‘It was also incredibly painful, I couldn’t wear make-up to hide any of it, it was too painful to even shower.’

Eczema has been a lifelong condition for Anisha. 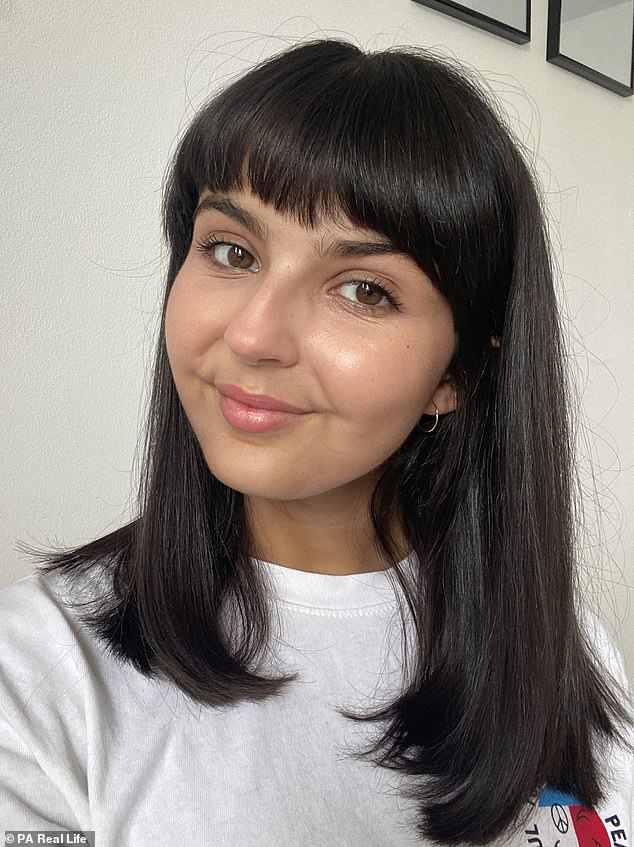 The use of £7.99 store-bought Balmonds skin salvation cream helped clear up her skin and she is now ‘hoping to have fun’ again this Christmas 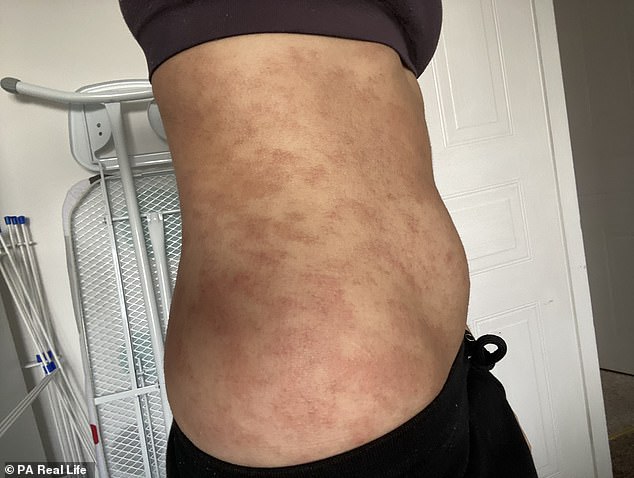 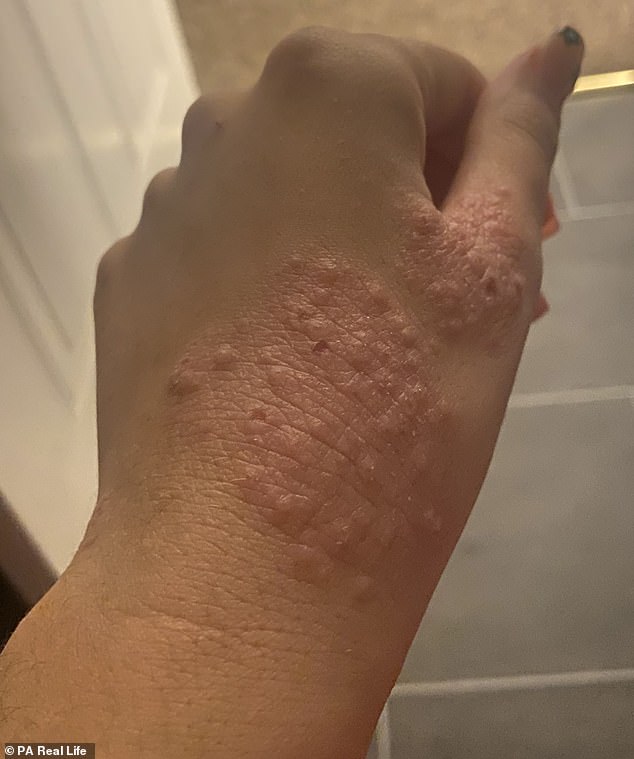 She said: ‘I’ve always had eczema since being born and it’s something I went to the doctors for as a child and was given cream to use.’

She added: ‘But in the last year, it’s gotten so much worse.’

Anisha noticed that her skin was becoming inflamed in November 2021 and sought medical advice.

‘It happened overnight, I was covered head to toe in red spots. At the time, I didn’t know what it was but I found it difficult to get an appointment so I took myself to A&E,’ she said.

She added: ‘They thought I had scarlet fever so I was treated for that but it was only later, when I saw a dermatologist, that I found out it was actually a skin infection called eczema herpeticum.’

According to the NHS, the infection causes areas of painful eczema which quickly get worse, causing open sores on the skin and hot and shivery symptoms.

WHAT IS ECZEMA HERPETICUM?

Eczema herpeticum is a potentially dangerous viral infection that can spread to large areas of the skin.

It most commonly affects those with eczema.

Eczema herpeticum is usually caused by the herpes virus that causes cold sores but also be brought on by hand, foot and mouth disease.

It develops when the virus infects large areas of skin rather than being confined to a small area.

Symptoms include painful, itchy skin eruptions, as well as high temperatures and shivering.

Blisters can spread, contain pus and weep, as well as sometimes leaving scars.

In severe cases, IV delivery may be needed.

Anisha was given steroid tablets but she struggled to clear up her skin.

‘There would be some improvement and doctors would wean me off the steroid tablets which would make my skin 10 times worse, so I’d be placed back on the medication,’ she said.

‘It was a constant cycle, but nothing seemed to get my skin under control and each time I was weaned off, my condition got worse.’

Things came to a head over Christmas 2021.

Anisha said: ‘I was on steroids during Christmas and my face was so bloated and swollen.

‘I really struggled with how I looked and I could see in pictures that my face was really swollen.

‘I didn’t get to do a lot last year for Christmas because I was really struggling with my skin and in a lot of pain.’

Anisha also could not wear make-up as it would irritate her skin.

‘I was advised by a doctor to minimise showering because of the pain it would cause my skin,’ she said.

‘Even wearing clothes and sleeping became really difficult and I got a lot of anxiety about going out. I started to experience steroid withdrawal too.’

She added: ‘I was still going to work so having to face people, which was difficult because I couldn’t hide the state of my skin.

‘People would show concern and would be nice about it, but it just felt like I couldn’t be normal.

‘I felt helpless and even my boyfriend and my mum didn’t really know what to do because none of the treatment seemed to work.’

‘When it ended in July, I was really nervous about how my skin would be,’ she said.

‘I’d experienced shedding and dry skin as a side effect but I was warned that the side effects could get worse shortly after finishing the treatment.’

She added: ‘My skin did start to become inflamed again so in order to combat that, I ordered some products online, one being the Balmonds skin salvation cream and started using it to protect my face.

‘I also started using it on my arms and the eczema patches all over my body, which really helped.’ 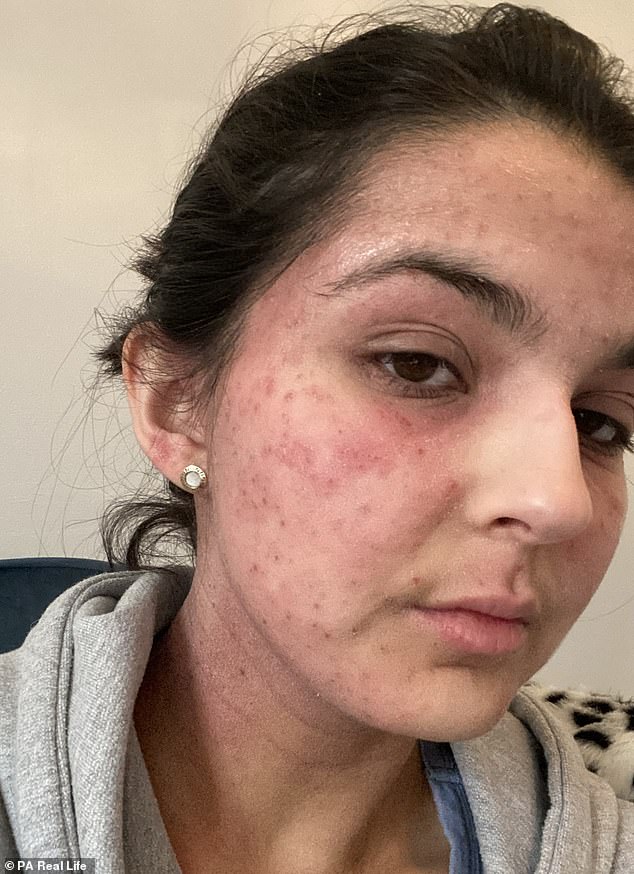 In March 2022, Anisha started four months of UVB therapy which treats the area using ultraviolet light and had previously been given steroids

To Anisha’s surprise, within a week of using the cream, her skin began to clear up.

‘I was shocked by how well it was working, after all these harsh treatments that I’d gone through, it was such a simple fix,’ she said.

‘Once I knew how well it was going, it became my go-to, and now I use it every morning after cleansing my face.’

While Anisha’s face is still recovering, she is cautious with what products she puts on her skin.

She said: ‘I’m a bit nervous about putting make-up on because I’m scared the slightest thing will result in a breakout.

‘The steroid treatment was very harsh and I think my skin is still recovering from it so I’m careful with what I use.’

But the executive assistant is over the moon with how much clearer her face is now.

She said: ‘There’s no visible sign of eczema which is just unbelievable.

‘I get the odd patch of dry skin and the skin on my face does feel quite thin and a bit wrinkly.

Now, Anisha is looking forward to making up for lost time this Christmas.

She said: ‘Last year wasn’t a great time for me with everything I was dealing with so I’m hoping to have fun this Christmas.

‘I haven’t done much socially like going out with friends in a really long time so I’m looking forward to being able to do things without feeling self-conscious or worrying that people are looking at my face.

‘I feel a lot more comfortable in my skin now and happier than I have been in a long time.’

If you enjoyed this story…

Woman, 30, with severe SKIN PICKING disorder that leaves her face covered in scabs and scars opens up about the horrific abuse she gets from strangers over her appearance