As her new-found musical empathy begins to wash over her, software coder Zoey (Jane Levy) finds herself on a street corner when the woman standing beside her reaches her arms out and begins to sing All By Myself. The moment is both gently comic and unexpectedly anthemic. On life's lonely road we've all been a weird singing pedestrian crossing lady.

Zoey's Extraordinary Playlist seems built from the leftovers of the musical comedy/drama Glee, transplanted from a high school into Silicon Valley, but suffused with a darkly dry comedy. If the recipe sounds slightly off, Levy's performance, and Austin Winsberg's sharp writing, however, give it a very sharp edge. 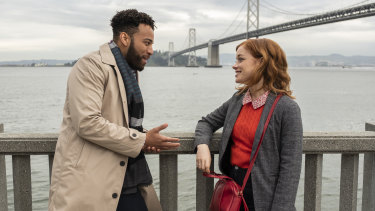 Zoey Clarke is written large as a television heroine of a very specific type. She's a curious hybrid of Ally McBeal and Bridget Jones. She's thoughtful and kind but she's also a little lost. She pours herself into her work, doesn't seem to do well socially and is quietly struggling with a degenerative mental illness that has immobilised, and silenced, her dad Mitch (Peter Gallagher).

After an MRI scan is interrupted by an earthquake, Zoey realises she has acquired a power best described as a kind of musical empathy. That is, when she is near people with strong emotional dynamics going on she sees elaborate musical production numbers which express their unspoken thoughts. It's a ludicrous premise but it works.

Turning to her next-door-neighbour Mo (Alex Newell), with whom, if we're honest, she is not particularly close, we get our best insight to how she should use her new power: "Songs are all just expressions of our deepest wants and desires," Mo says. "Joy, pain, heartbreak, yearning, forgiveness, revenge. Good music can make you feel things you can't express in words."

And the series uses its music powerfully. In a sense the playlist itself becomes another character. Chosen poorly the series would be a wreck. As it is the pilot lurches from All By Myself to Mad World, to Cyndi Lauper's True Colours and finally The Partridge Family's I Think I Love You. It's so bonkers it's brilliant. Future episodes tap Roar (by Katy Perry), The Great Pretender (The Platters), I Can't Get No Satisfaction (The Rolling Stones) and even Jesus Christ Superstar.

While some of the dialogue is sitcommy, the series finds its footing fairly quickly. As a comedy it works, but there are a lot of awkwardly cute comedies. It is when it delves deeply into melancholy however that it soars. Her first encounter with someone else's problems doesn't go quite to plan – she likes him, he's got a fiance – unexpectedly leaving her even more adrift than she began. She may not get a promotion at work that she wants. And her own emotions, over losing her dad, unravel quickly after.

And then, magically, Zoey's dad Mitch starts to sing and while she is the only one who can perceive it, the moment is transformational. Aside from the potential that her gift has to give others, Zoey realises that it has given her her father back. And that's when you realise that Zoey's Extraordinary Playlist doesn't so much tug at the heartstrings, as play them like a double bass.

Zoey's Extraordinary Playlist
Stan, on demand (which is owned by this masthead)