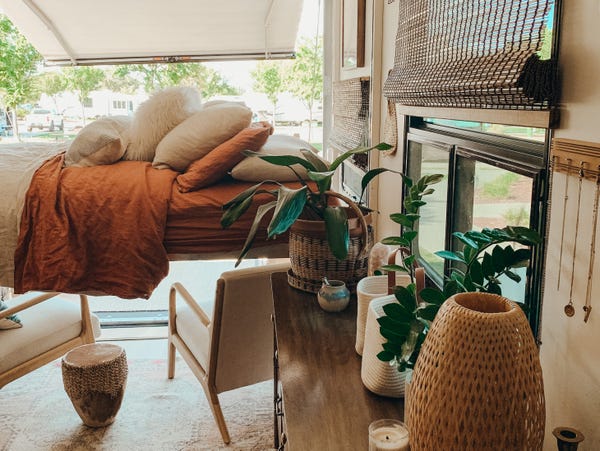 Lauren and Gabriel Thompson's family home on wheels is so bright and stylish, it's hard to believe that it's not a beachside cabin but rather a converted RV.

It's even harder to believe that the family of six — Lauren and Gabriel's kids are 10, 8, 5, and 4 — lives in it full-time. And that they transformed the motor home from dark and dated to bright and modern in just 11 weeks, with no prior experience.

Lauren and Gabriel Thompson met in college in 2008, and have been married for 11 years. 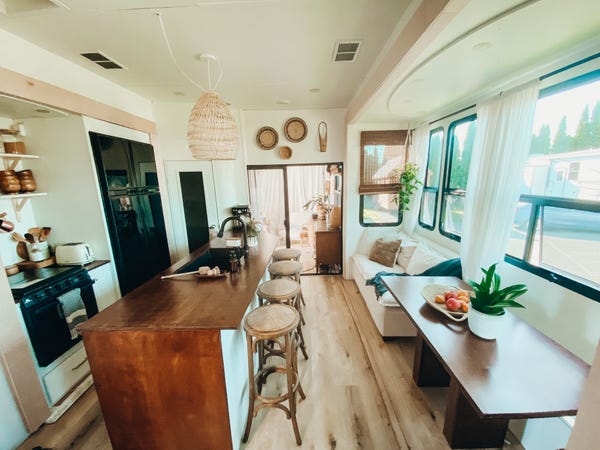 The two were living in California with their four kids but wanted to move — they just didn't know where to. So, they thought about how great it would be to travel the country, explore different places, and then settle in their favorite spot.

They sold their home and furniture, bought and renovated a trailer, and moved in over the course of 11 weeks, on August 1. 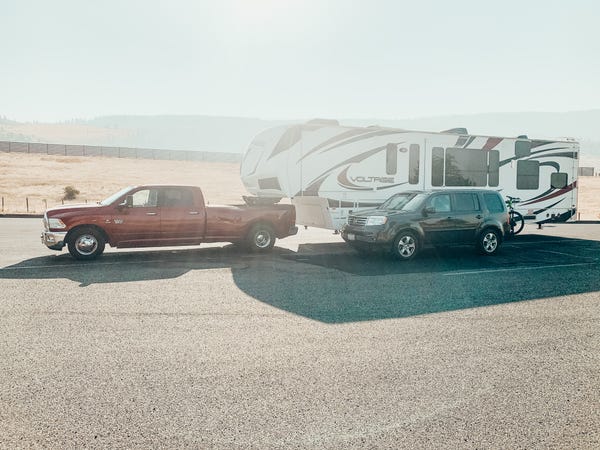 They drove from California to Arizona to pick up their RV, a 42-foot toy hauler. It was the first time Gabriel had driven something so massive.

A toy hauler is a type of RV trailer that is meant to carry "toys," such as ATVs or motorcycles, in a kind of garage at the back.

It appealed to the Thompsons as the RV is not only meant to carry a lot of weight, and could thus be renovated accordingly, but also has a separate back room that they could turn into a master bedroom, allowing them to have private space. Since toys are meant to be loaded and unloaded from there, it also has giant patio doors that they love opening up to the outdoors.

Without any prior experience, they did all of the work — besides tiling the bathroom — themselves. 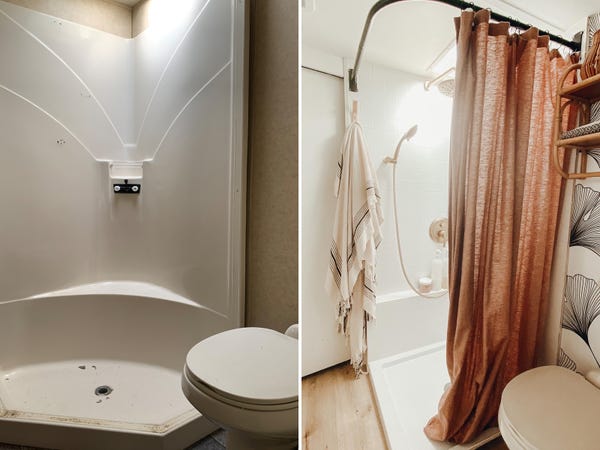 "I kind of got inspired by different Instagram accounts that have done it already," Lauren said, of the RV renovation, describing her family's motor home's style as "mid-century boho."

Lauren mixed furniture she already had with new items, as well as ones that Gabriel built himself. 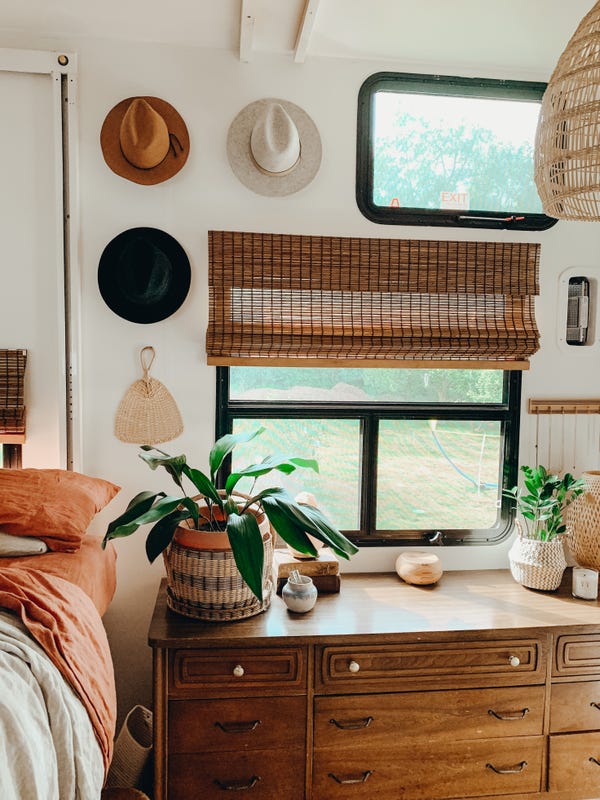 "I like vintage vibes, and natural wood and colors. All the walls are white, but then we bring a lot of warmth in through the blinds and the bar stools and rug," she said. "I really like simple, but warm and cozy."

They say that the 42-foot RV has pretty much all the amenities their home had. 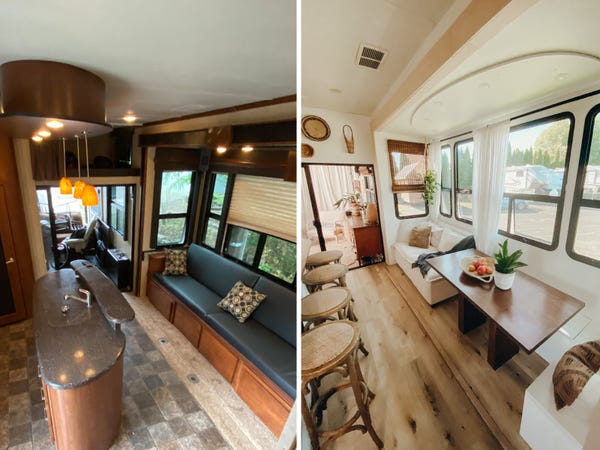 There's a master bedroom with a big closet, lofted bed, and two-in-one washer/dryer; a kids' room that has four bunk beds with built-in cubbies and shelves; a bathroom with a tiled shower; a living room with a couch and dining area; and a kitchen with a sink, stovetop, oven, double-door fridge, and a counter with bar stools.

"When you go into an RV park, ours definitely looks a little dated outside next to other ones," Gabriel said. "And then when you walk in the front door, you're like, 'Oh yeah, ours is way cooler.'"

Despite going from a 1,400-square-foot home to a 440-square-foot RV, Lauren says the latter "doesn't feel a whole lot different than being in a house, just smaller." 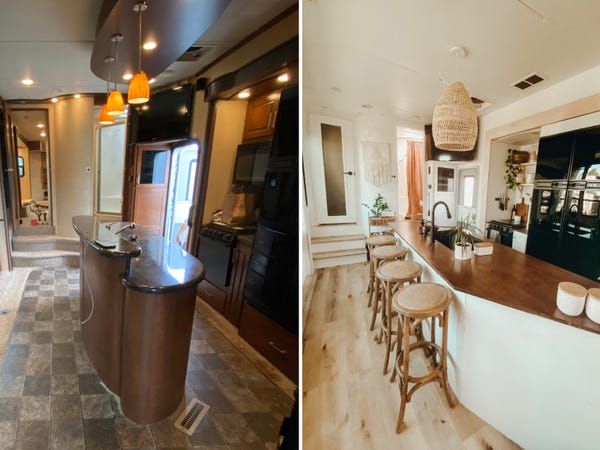 Nine-foot ceilings make the motor home feel bigger than it is.

"It looks like more space when you've got an extra foot above your head," Lauren said.

While Lauren says that cooking in the small kitchen has been an adjustment, she's been enjoying it. 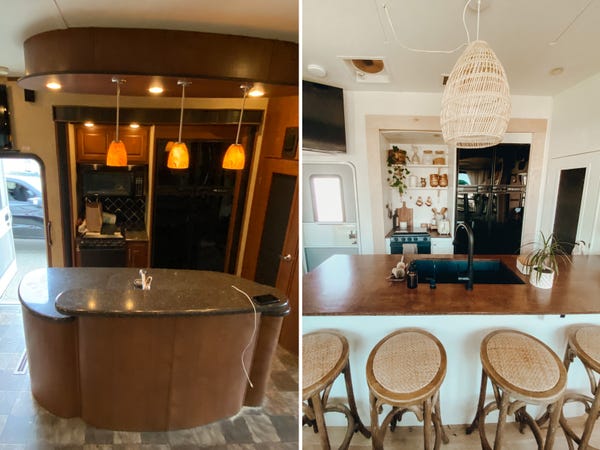 While their fridge is sizable — as a family of six, a large fridge was non-negotiable — Lauren and Gabriel say they've had to change their shopping habits quite a bit.

He says that the fridge was one of the more difficult aspects of RV life to wrap his head around since it can't run while the RV is driving, and takes a while to cool back down when opened however briefly. That led to a lot of food going bad when the Thompsons first moved in, he said.

The biggest adjustment for the couple hasn't been downsizing; it's getting to know the intricacies of RV life. 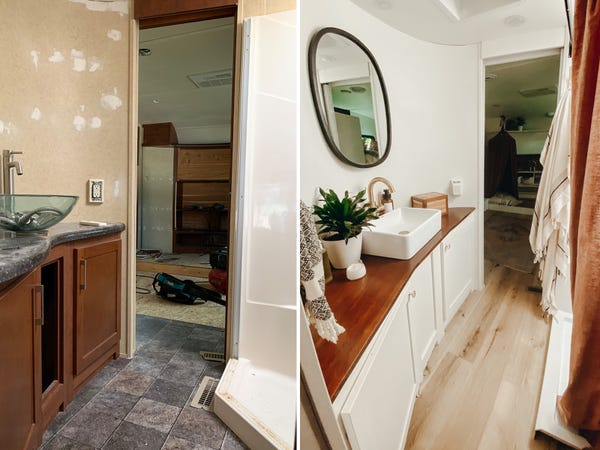 "We just never have done RVs before, so it's like, 'Is this how it's supposed to work? Is water supposed to be sitting in this area? Why does it smell?'" Gabriel said. "We're still really new at this."

Gabriel says he loves the simplicity of RV life, and feels like he has a lot more free time now than he used to. 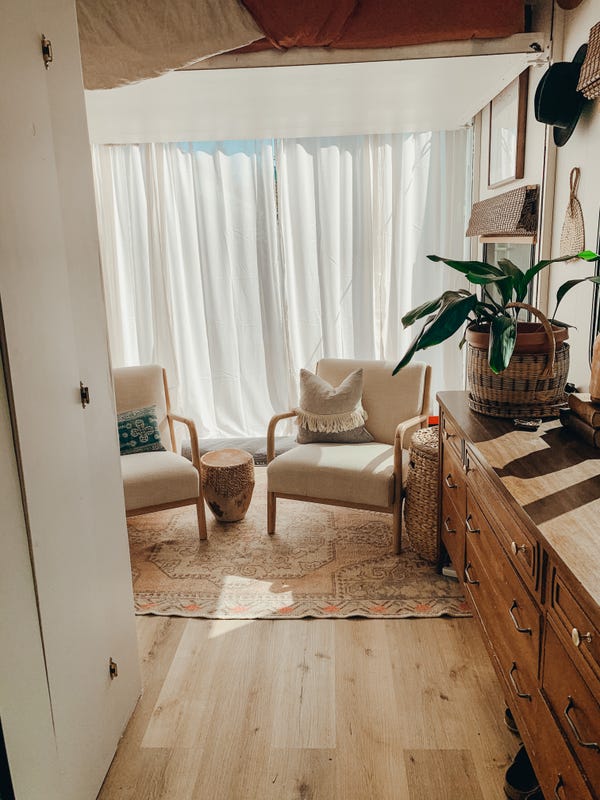 While Gabriel, who works in education technology, was already working remotely before the family moved into the RV, Lauren is a stay-at-home-mom who will soon start homeschooling the kids.

For Gabriel, living in an RV has freed up his time.

"I came off work yesterday and took the kids to the park and came back and made dinner — it wasn't like 'we only have 30 minutes before bedtime,'" he said. "We don't have 58 commitments a week, we have maybe two."

Of course, between the six of them, things can get a little tight … 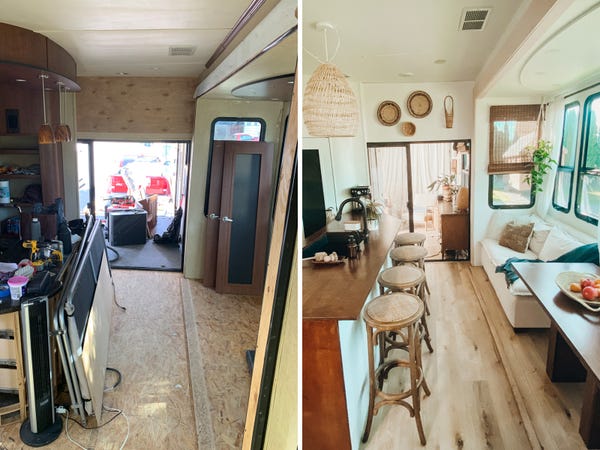 While having four separate rooms makes things easier, according to Lauren, the kids are still getting used to the smaller scale of things.

"It definitely forces us, in a really healthy way, to work together," Gabriel said of their living arrangement, describing the RV as a "mini-world" in which the kids can learn how to be helpful, cooperate, and resolve issues quickly.

"We're doing life on a micro-scale," he said.

The kids, so far, are loving RV life. 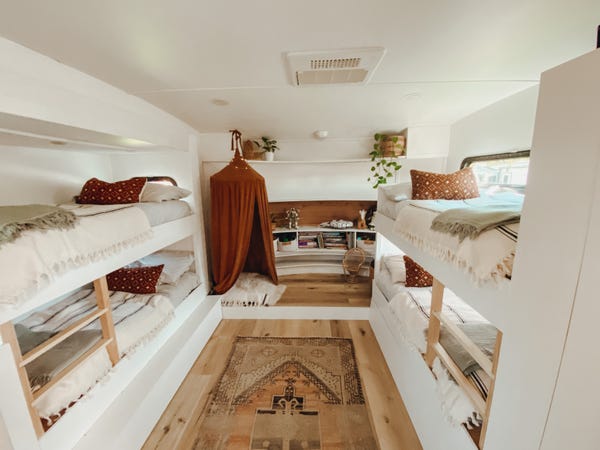 While Lauren and Gabriel say that the kids have understood that the RV is their home now, they haven't really gotten into enough of a routine yet to understand that they're not just on an extended vacation.

"As much as they know that it's our home, they'll ask me every day, 'what are we going to do today?' And I'm like, 'well, I'm still gonna work,'" Gabriel said.

Lauren says that will probably change when she starts homeschooling them, and she's excited to take them to places most kids will only get to read about in their history books.

While the Thompsons' adventure is only just beginning, they don't regret a thing. 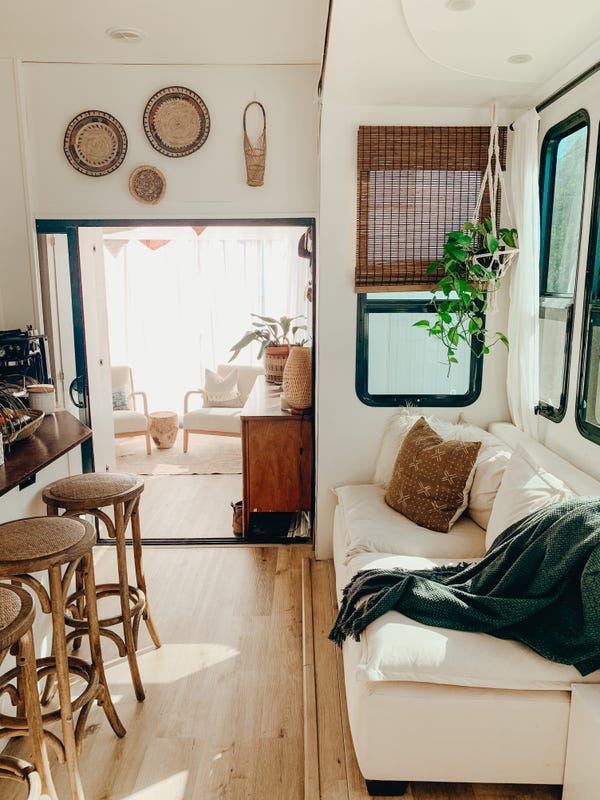 "My favorite part is that we did it together. I built it and Lauren envisioned it," Gabriel said. "It feels like it's a part of our family in that sense, and we get to experience it together for however long we're in it."

"Where we're going next, we don't really know," Lauren added. "But that's part of the adventure."