Clear night skies are quite a rarity in Britain – but when the clouds do break, the cosmos is always ready to put on a show, as these incredible pictures reveal in mesmerising fashion.

They’re all taken by Dan Monk, 30, an astronomer and the Director of Astrophotography at Kielder Observatory in Northumberland.

One photograph captures the majesty of the Milky Way, which he explains is ‘roughly 100,000 light-years’ away from the Earth, while another illustrates the Andromeda Galaxy – a ‘collection of half a trillion stars’ – and a third shows the Comet Neowise passing the Earth at 144,000mph.

Dan, who is originally from Sunderland, started learning about the night sky in his teens and eventually turned to astrophotography as a way to see more stars. He says: ‘Although looking through a telescope is an amazing experience, the human eye can’t compare to the detail that a camera can “see”.’

He continues: ‘The most exciting part of photographing the night sky is being able to expose yourself to breathtaking locations at night. Sitting under a dark sky surrounded by a serene landscape with the sound of the camera clicking and recording ancient photons of light is a magical experience.’ Scroll down to see awe-inspiring examples of Dan’s work… 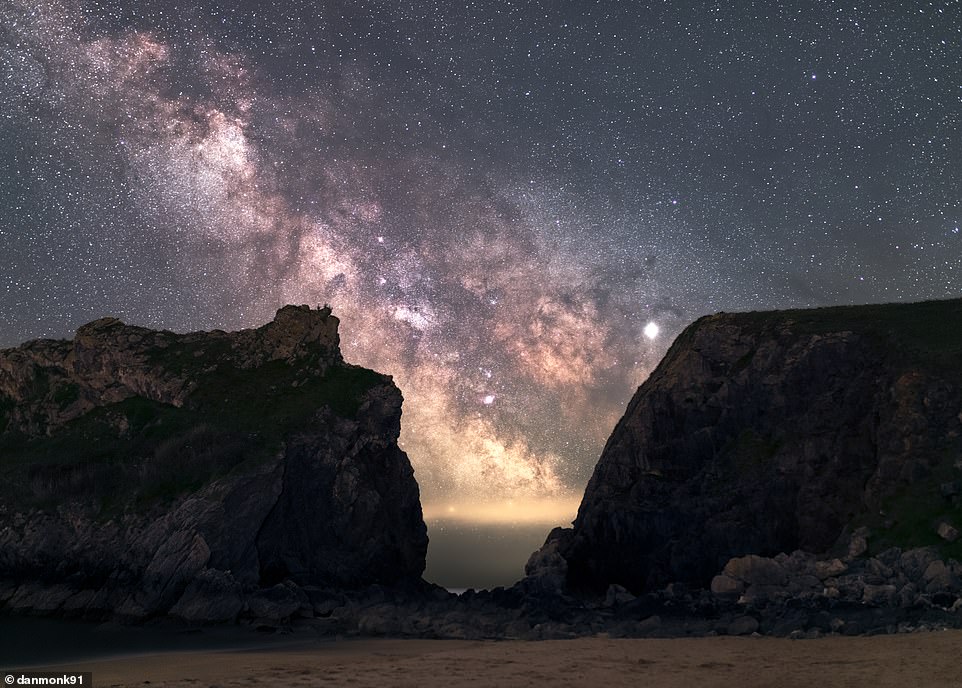 Look up and you’ll see the Milky Way, as captured through Dan’s lens. This striking picture was snared at Broad Haven South Beach in Pembrokeshire, Wales. How far away is the Milky Way? According to Dan, it’s ‘roughly 100,000 light-years away, meaning if you travelled at the speed of light it would take you 100,000 years to cross the galaxy’. He adds: ‘The New Horizons spacecraft that was sent from Earth in 2006, travelling at over 36,000mph (57,936kph), took nine years to reach Pluto. It would take it two billion years to travel the diameter of the Milky Way’ 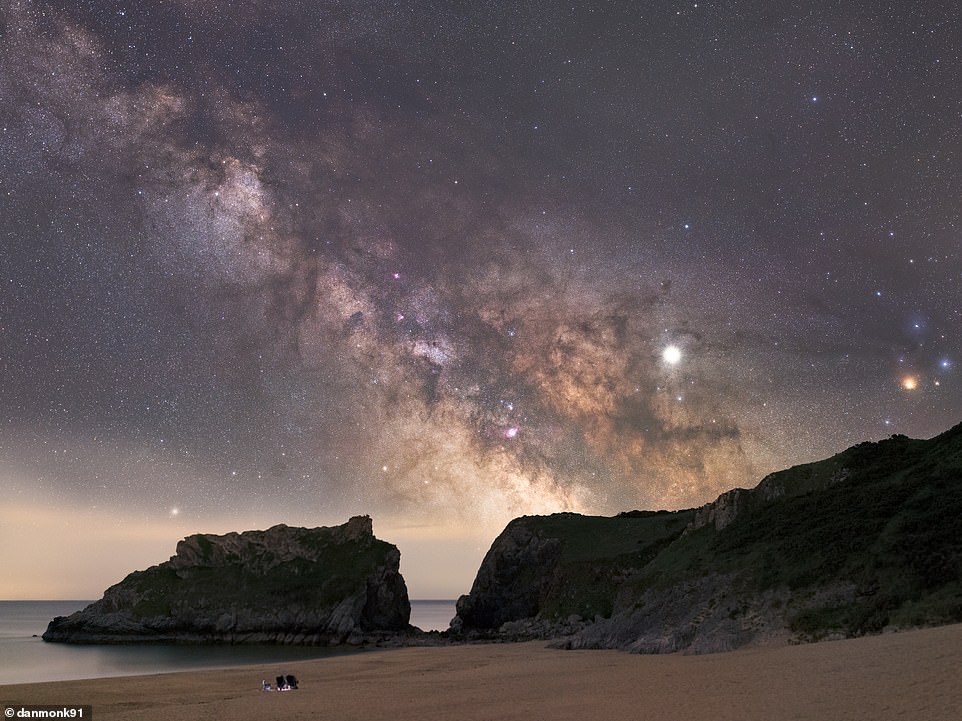 Another mesmerising shot of the Milky Way captured at Broad Haven South Beach. Describing the sky, Dan explains: ‘Here we can see the core of our galaxy, known as the Galactic Centre. It is the brightest part of our galaxy due to the large population of stars. Right at the heart of the Galactic Centre sits a supermassive black hole which is over four million times the mass of our sun!’ 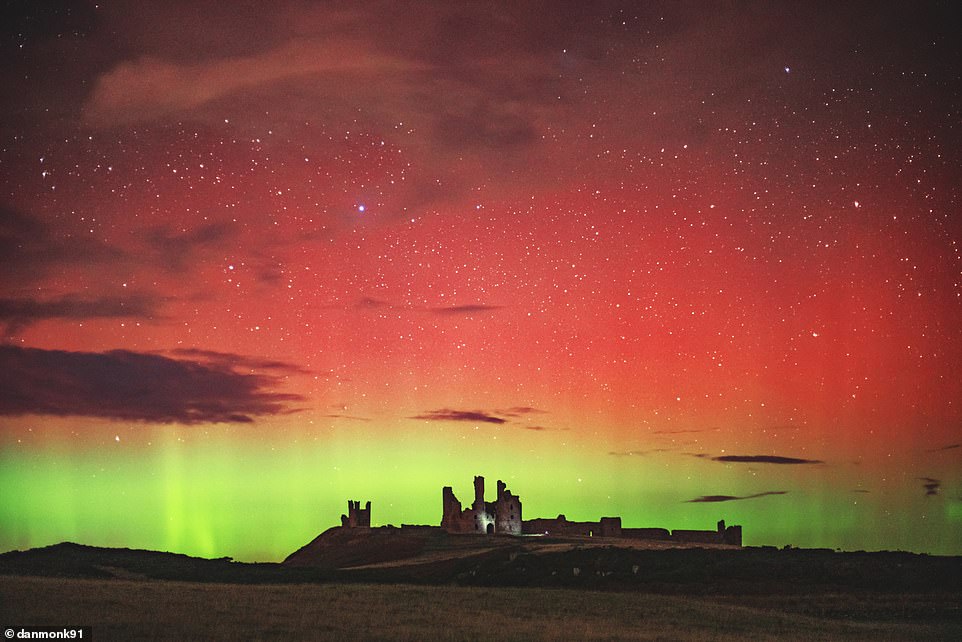 This spectacular image shows the aurora borealis over the ruins of the 14th-century Dunstanburgh Castle in Northumberland. Dan says of the light show: ‘It was a decent display with obvious structure visible to the naked eye.’ Ever wondered what causes the aurora borealis? Dan reveals: ‘The Northern Lights are caused by Earth-directed charged particles released from the sun that travel through space and then connect with Earth’s magnetic field. The solar particles are then carried into the polar regions via the magnetic field which then end up interacting with gasses high in Earth’s atmosphere producing the aurora.’ As beautiful as they are, aurora displays are a rare occurrence in Britain, Dan reveals. He says: ‘In the UK, the Northern Lights take perseverance to observe. Typically, we might see a handful of decent displays throughout the year, depending on solar activity. More northern latitudes, such as the north of Scotland, see them more frequently than northern England. We would see the lights more often if we didn’t have such gloomy weather!’ 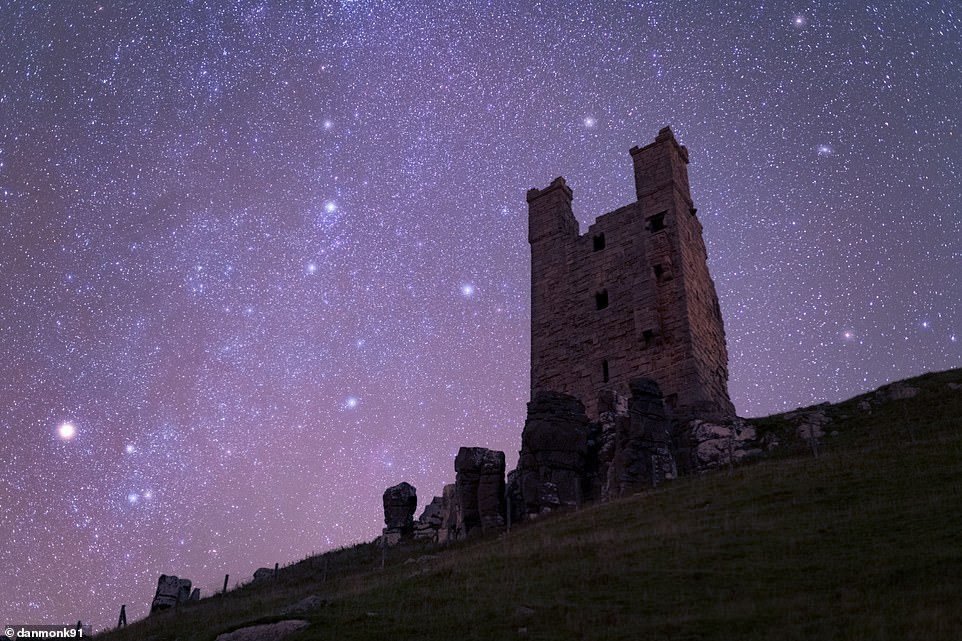 Behold – a ‘starry sky’ over Dunstanburgh Castle in Northumberland. Dan enjoyed a ‘stunning clear sky’ on the night that he captured this striking picture. According to Dan, the brightest lights in this image are ‘stars that make up some of the prominent winter constellations’. Auriga, Perseus, Andromeda and Aries are visible, he reveals 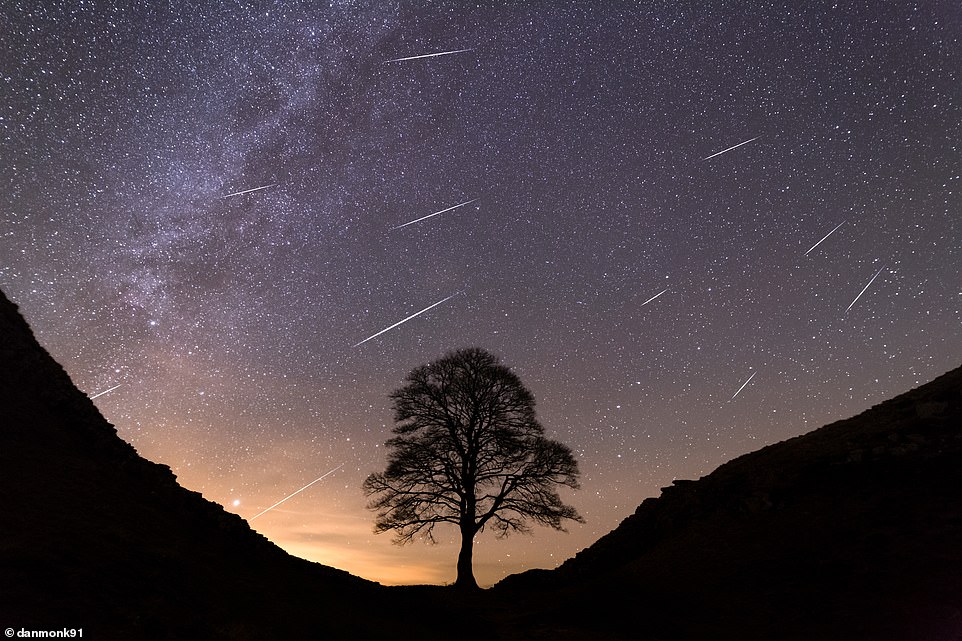 Feast your eyes on the Geminids meteor shower of 2018, as captured at Sycamore Gap (of Robin Hood: Princes of Thieves fame) in Northumberland. The image is a composite of multiple images taken over three hours. Dan says: ‘The Geminids are one of the most active showers of the year and under a dark sky you could potentially see one shooting star every one to two minutes, at its peak.’ Explaining the science behind the celestial show, he says: ‘The Geminid meteor shower has a Zenithal Hourly Rate (ZHR) of up to 120 meteors per hour. This means if the radiant of the shower was directly overhead, you were in perfect dark skies with no moonlight, and you could look in every direction of the sky all at once, you’d see 120 per hour. This is impossible, but if the shower occurs on a moonless night, from a dark location you may see one meteor every one to two minutes on average.’ Want to see them for yourself? Dan says: ‘The Geminds peak on December 13 and 14 every year and are best viewed in the northern hemisphere due to the high radiant’ 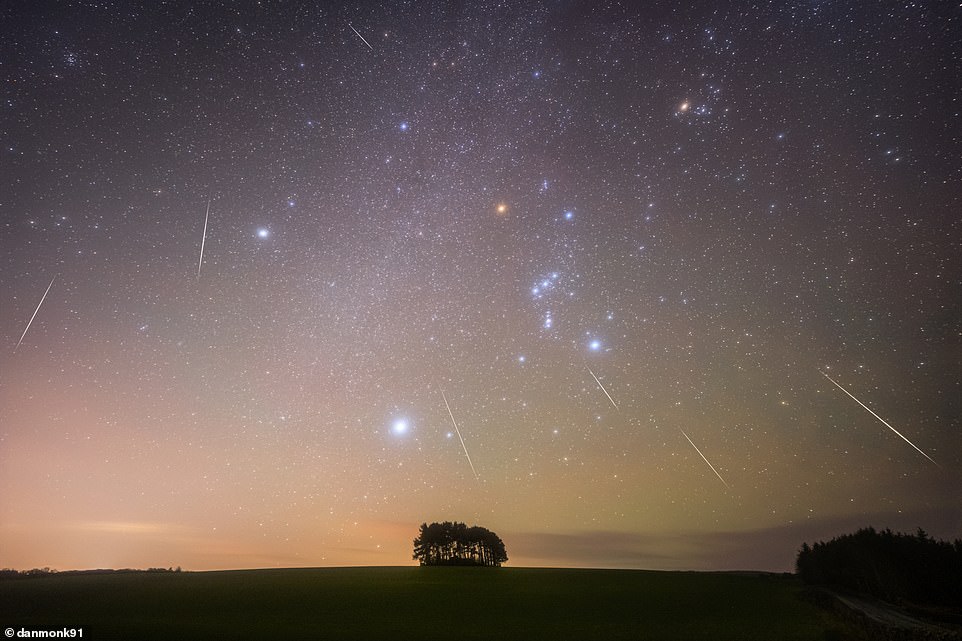 A shot of the ‘shooting stars’ during a Geminid meteor shower taken in 2020 in Northumberland. Dan describes the stunning snapshot as a ‘composite image showing seven meteors caught during a one-hour timelapse’. He adds: ‘I’d have loved more meteors but the clouds arrived!’ Shedding light on the origins of meteors, Dan explains: ‘Meteors are tiny grains of dust from our solar system that burn up high in Earth’s atmosphere. They can be anywhere from 50 to 80 miles above Earth’s surface’ 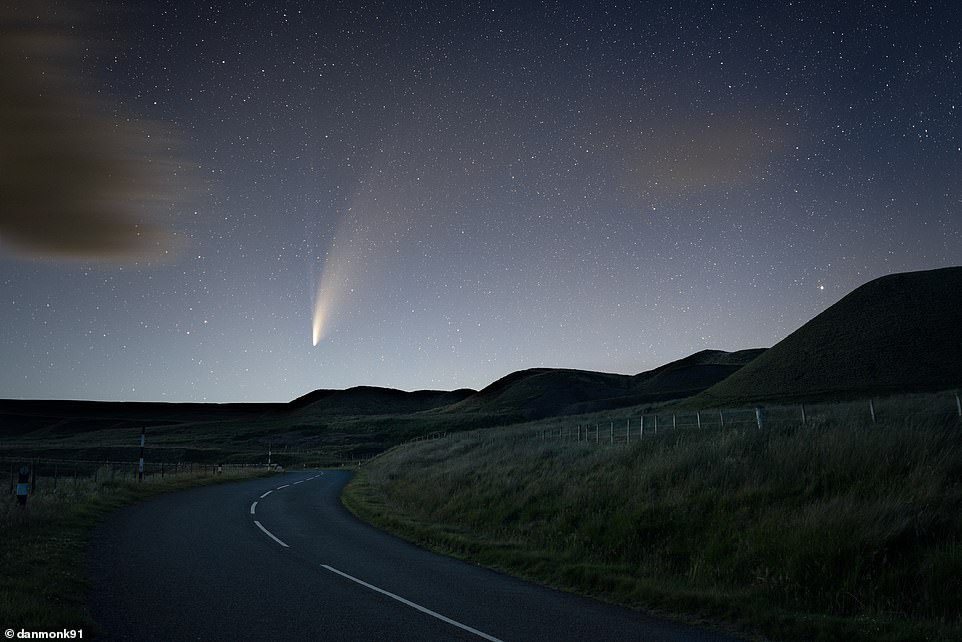 This incredible shot shows the Comet Neowise (also known as C/2020 F3) shooting through the sky in County Durham in July 2020. Dan spent five nights trying to capture the comet, and eventually enjoyed success early one morning when this composite image was captured. Dan explains: ‘The speed of a comet changes dramatically due to their highly elliptical orbit. They slow down when further from the sun and speed up when near. When Comet Neowise was passing Earth it was travelling roughly 144,000 mph, twice the speed of Earth orbiting the sun’ 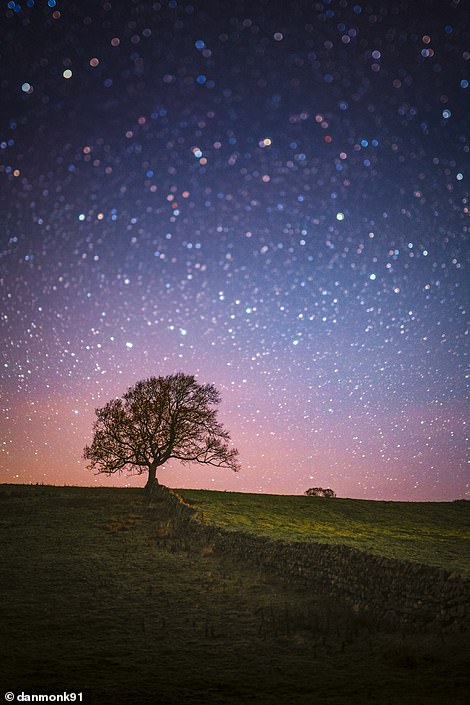 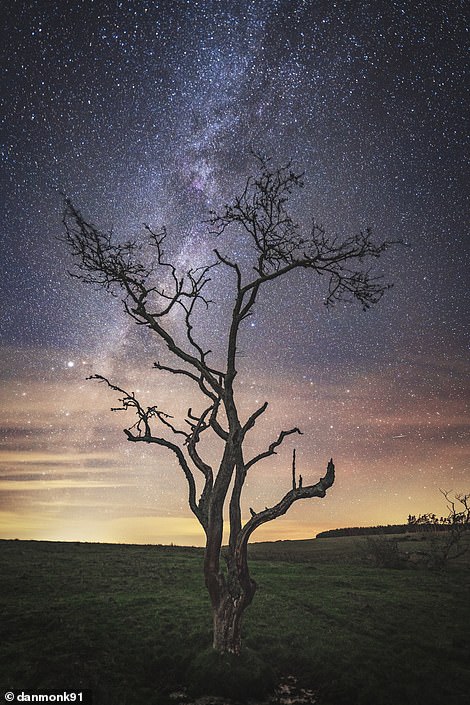 LEFT: This enchanting photograph shows a ‘lone tree in a field’ on the side of the A69 in Northumberland. Dan spotted the tree from his house and headed out to capture it. The most prominent constellation visible in the picture is Ursa Major, also known as ‘The Great Bear’, Dan reveals, though he notes that the most recognisable part of the constellation is ‘The Plough’ or ‘Big Dipper’. Dan adds: ‘I took this image using a tilt-shift technique, which is where the stars gradually get more out of focus towards the top.’ RIGHT: Northumberland was the setting for this poignant shot taken in the wake of Storm Arwen, which raged through England in late November 2021. Dan describes the picture as ‘the calm after the storm’, adding that ‘Northumberland took a battering from Storm Arwen’. Dan recalls arriving at work after the storm and counting 70 fallen trees across the access track to the observatory. He adds: ‘On the way back home I spotted this surviving tree alone in a field and I had to stop to take a snap.’ What can we see in the sky? Dan reveals: ‘This part of the Milky Way is known as the Cygnus Region, which is rich in ionised clouds of hydrogen that typically sit thousands of light-years from Earth. You can see them as reddish/pink blotches in the image.’ He adds: ‘Astrophotographers like to use special hydrogen filters that isolate the light emitted from these regions which helps them stand out’ 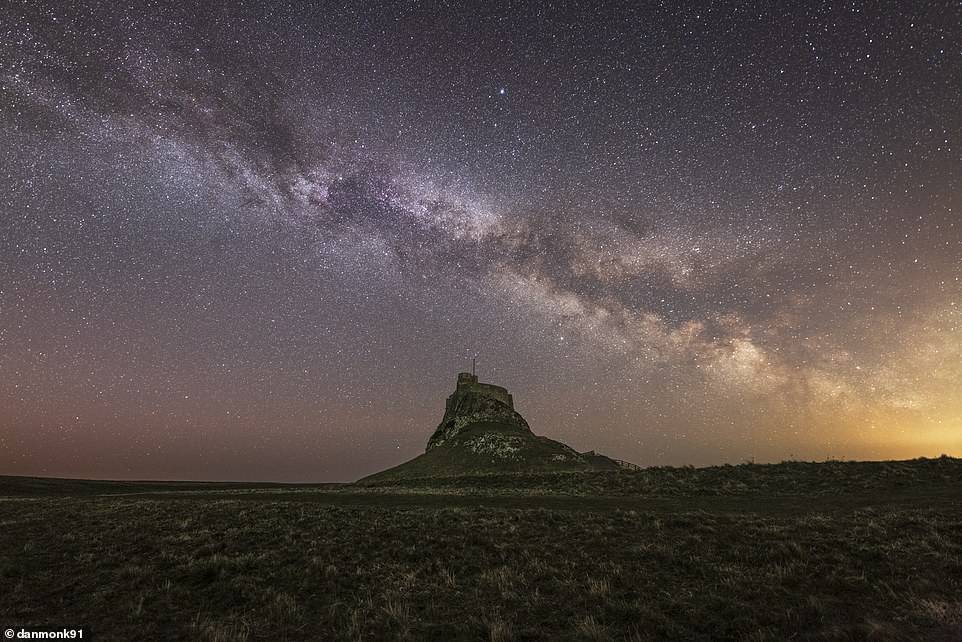 Cast your eye above and you’ll see a breathtaking picture of the Milky Way over the 16th-century Lindisfarne Castle on Northumberland’s Holy Island. ‘It was my first visit to Holy Island and to the impressive Lindisfarne Castle,’ Dan recalls. ‘It’s very photogenic at all angles – I couldn’t stop running around with the camera.’ Describing the dark ribbon across the sky, Dan says: ‘The plane of the Milky Way is filled with gas and dust. The gas and dust can be regions of star formation or leftover material from dead stars. Our galaxy has a high concentration of carbonaceous dust which can be seen as a huge dark rift in the plane of the Milky Way, blocking the light from distant stars’ 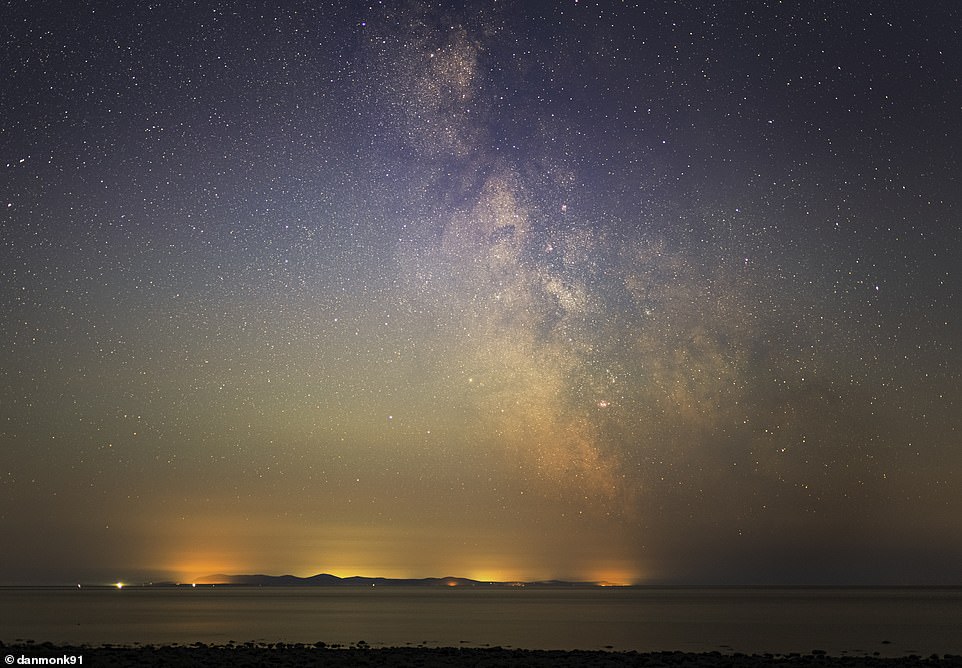 This stunning picture shows ‘the Milky Way breaking through the summer twilight over the Isle of Man’. Dan was positioned on the southwest coast of Scotland when he captured the photograph. ‘I wasn’t intending on going for this shot, but I quite liked the effect from the pockets of light pollution coming from the island,’ he says. When it comes to stargazing, the camera can capture far more than the human eye, Dan reveals. He says: ‘The unaided human eye, when fully dark-adapted, can see roughly 2,500 – 3,000 stars in one hemisphere. When taking a long exposure using a highly sensitive camera sensor, that number is increased into the millions. The Milky Way structure also becomes brighter and more prominent than seen with the naked eye’ 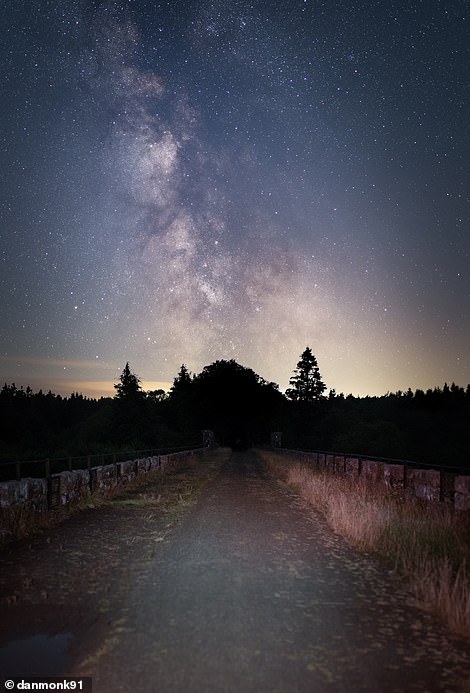 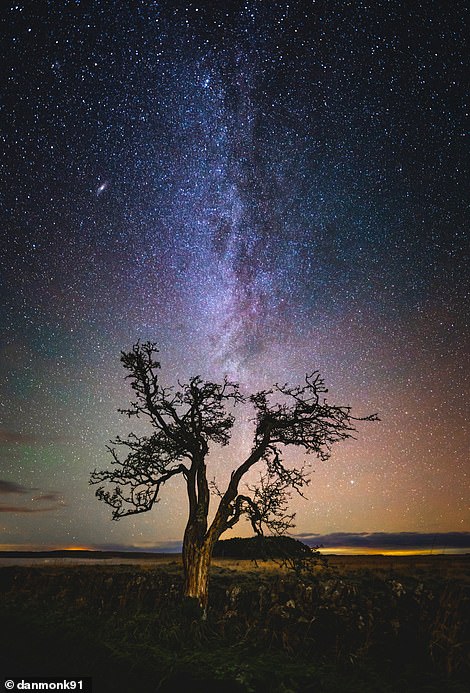 LEFT: Dan calls this picture ‘The Road to the Milky Way’. The composite shot shows the Milky Way over the Kielder Viaduct, a 19th-century bridge in Northumberland. ‘In the UK, the galactic centre [of the Milky Way] is in the best position for us to view in the summer, but the light summer nights prohibit our views,’ Dan explains, adding: ‘The best times to see it are before we lose astronomical darkness in mid May and when astronomical darkness returns in late July.’ He adds: ‘To get the best view of the night sky it’s important to travel as far as possible from the artificial lighting that plagues urban areas. City lights shroud the fainter stars which dramatically reduces the amount of stars that the human eye is capable of seeing.’ RIGHT: The above photograph shows a tree on the side of Northumberland’s Military Road silhouetted by the Milky Way. Dan adds: ‘Just to the left of the Milky Way there’s a small elongated fuzzy patch. This is the Andromeda Galaxy which is a collection of half a trillion stars, 2.5million light-years away!’ The photograph is a 20-second exposure, Dan reveals, adding: ‘The longer the camera sensor is exposed to light, the brighter the Milky Way will become. Taking exposures of 10 to 30 seconds is typical for a nightscape’ 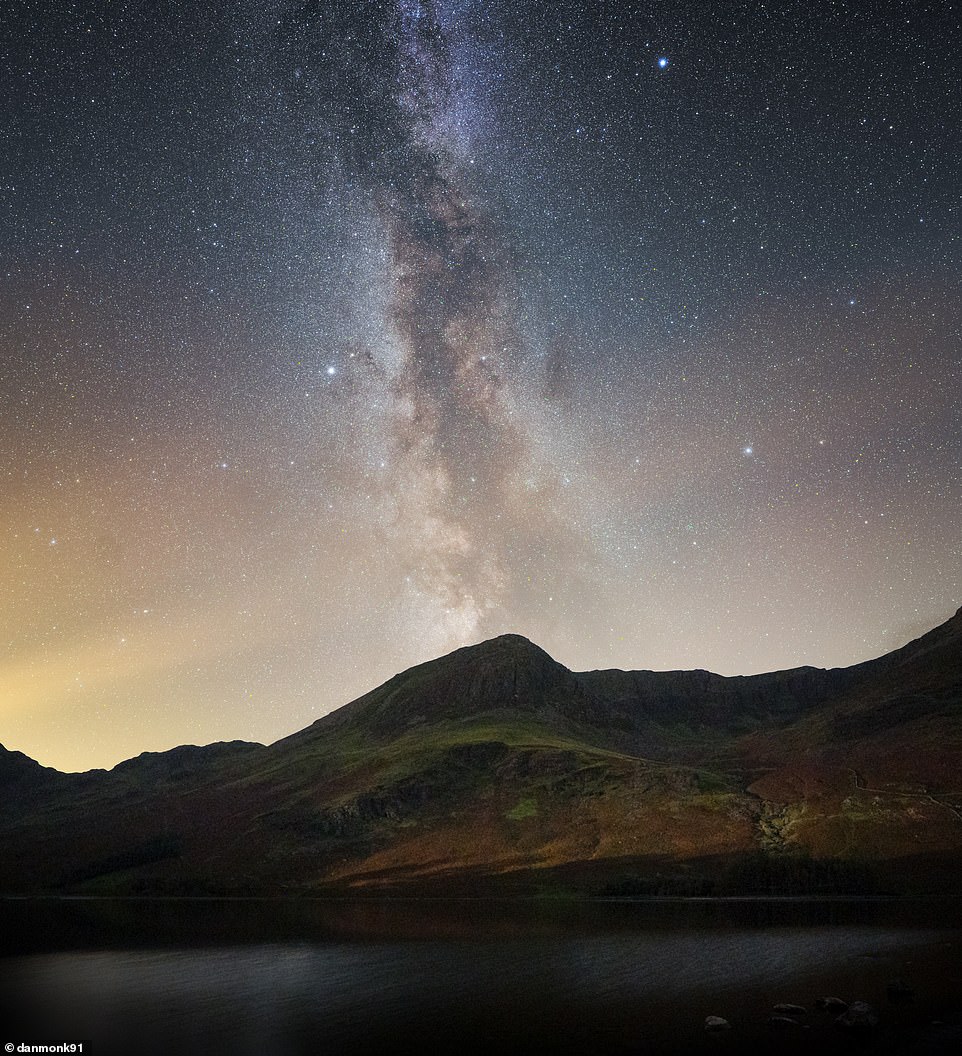 Above you’ll see a beautiful snapshot of the Milky Way over Buttermere lake in Cumbria’s Lake District. ‘This part of the Milky Way runs through the constellations Aquila and Scutum,’ Dan says, adding: ‘It has a prominent rift of dust which is easily visible to the naked eye from a dark sky site.’ According to the astronomer, one of the biggest challenges in astrophotography is ‘cloudy weather’. He says: ‘Unfortunately, perfectly clear nights in the UK are few and far between. Astro images usually take a lot of planning.’ Describing the conditions that he endures when out photographing, Dan says: ‘The winter months can be tough when I’m out until the early hours in temperatures as low as -10 degrees, but overcompensating with warm clothing does the job’ 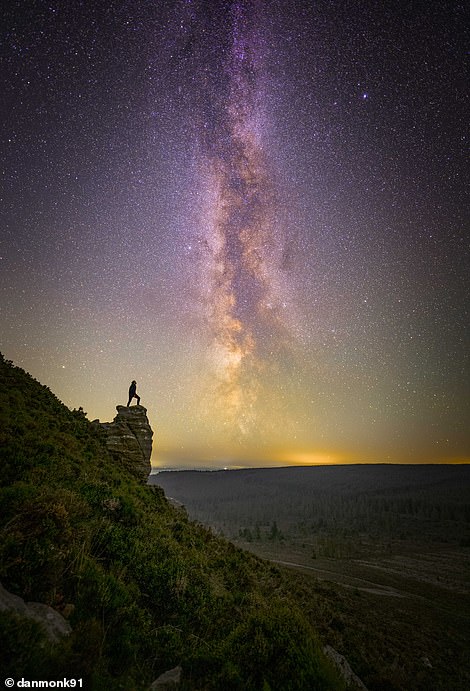 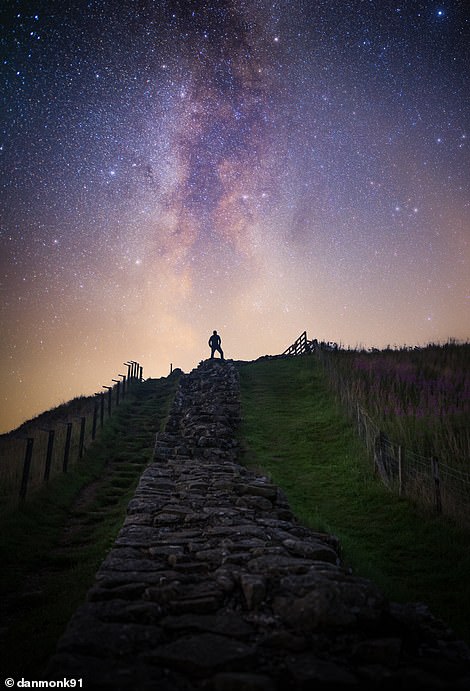 LEFT: The Simonside Hills, a hill range in Northumberland, were the setting for this magical shot of the Milky Way. Describing his clifftop perch in the photograph, Dan admits that it was ‘scary standing on the edge of a cliff at night.’ Where is the sun in relation to the Milky Way? Dan explains: ‘Our solar system is 26,000 light-years from the centre of the Milky Way. It takes 250 million years for The Sun to do a single orbit of the galaxy.’ RIGHT: Above you’ll see the Milky Way over Cawfields Quarry, a park in Northumberland. Dan says: ‘Gazing up at the Milky Way from a tranquil countryside location really helps put life into perspective. Thinking of the countless possibilities in space and time make you realise that you’re just an infinite blip in the cosmic timescale.’ While the entire Milky Way has 200 to 400 billion stars within it, according to Dan, here ‘we are looking at a relatively small section that could contain tens of billions of stars’