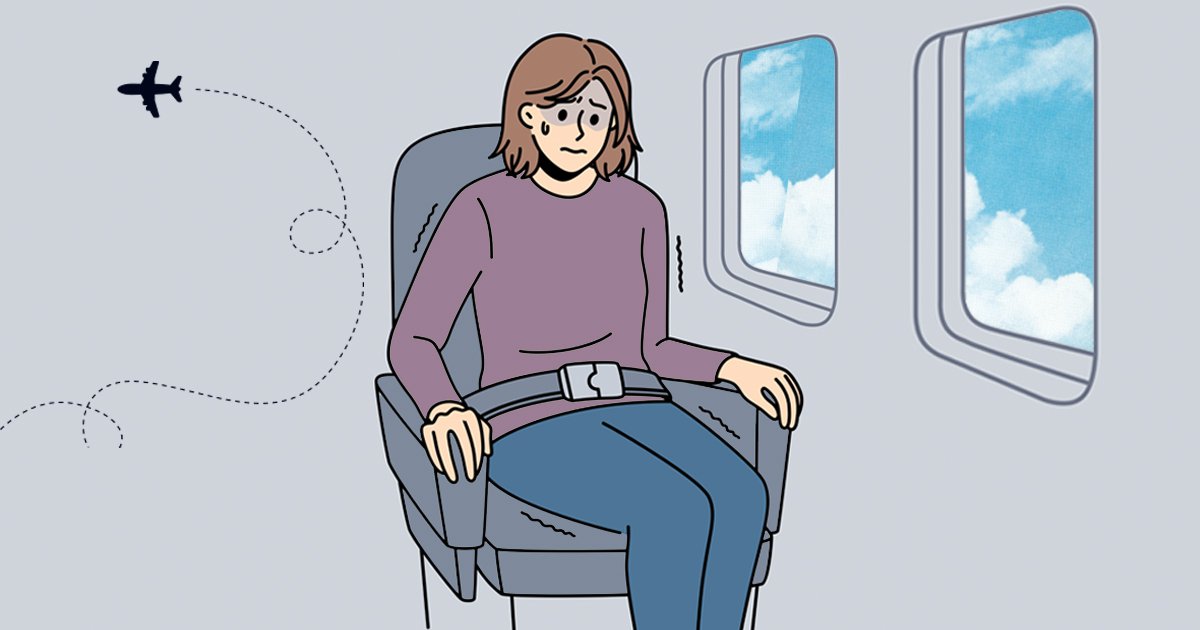 Flying can be unsettling.

There’s something inherently unnerving about moving through the sky 38,000 feet above the earth in a 127,000lbs metal box.

And having a fear of flying, otherwise known as aerophobia or aviophobia, is more common than you might think.

Between 33% and 40% of people experience some form of anxiety when it comes to flying, according to Stratos Jet Charters.

And a report from TIME found that 2.5% and 6.5% of the population have crippling anxiety, a genuine fear of flying, that is classified as a clinical phobia.

If you are scared of flying, I can almost guarantee that you’ve been told that ‘you’re more likely to die in a car accident than a plane crash’.

And while data shows that car travel is about 100 times deadlier than flying, knowing this fact is unlikely to stop the sweaty palms, dizziness, waves of nausea or the sinking feeling in the pit of your stomach when you edge nearer to take off.

Fear of flying could be linked to a fear of aeroplanes themselves or connected to psychological issues such as panic attacks, claustrophobia or post-traumatic stress disorder.

Some people may be scared to fly as they are not in control of what happens during the flight.

For others, the fear stems from external factors such as turbulence, bad weather or potential faults with the plane.

‘I’ve suffered from a fear of flying since I was little, although I have no specific memory of a difficult flight or traumatic experience that may have triggered this,’ says BWRT therapist and wellbeing coach from Warwick, Hannah Bailey.

‘The fear and panic around flying seemed to increase as I got older.

‘Even the process of booking a flight would turn my stomach over because I knew that I would have to endure the flight before I could enjoy my holiday.

‘Once I boarded the plane, I would be checking, and double checking my surroundings – did the pilots and crew look experienced and professional, were there any strange noises, did the plane look evenly balanced with passengers?

‘I would be hyper-vigilant and feel particularly distressed if I felt another passenger was loud, difficult or drunk in any way.’

Hannah tried many different techniques to help treat her fear of flying, but nothing seemed to work.

‘Once in the air, I would try to remain calm and relaxed using some different mindfulness techniques that I had learnt; however, these always required a lot of effort and weren’t always successful,’ she says.

‘If we encountered turbulence, then this is the part that would cause me the most stress and panic.

‘I would be in tears or having a panic attack, gripping the seats and unable to talk to anyone.’

Then two years ago, Hannah came across a type of psychotherapy called BrainWorking Recursive Therapy (BWRT), which offers the chance of fast and effective relief from many fears and phobias.

BWRT works by ‘freezing’ the fear pattern and creating new neural pathways with a more positive response which is chosen by the individual.

When you next get on a flight, your brain will interpret it as safe, and the fear should be gone.

BWRT works faster than other therapies (in 1-4 sessions), so there is less likelihood of relapse.

Hannah says: ‘I had one session of BWRT, and it has completely changed my response to being on a flight.

‘The treatment removes the emotional responses from troubling issues – like the fear of flying – and creates new neural pathways that no longer have the old undesirable response attached to it.

‘I’ve had several flights since my treatment and have been absolutely fine – so calm and relaxed – even during the dreaded turbulence.

‘I can finally book a family holiday and genuinely look forward to it without the dread of having to get through the flight before I could relax and enjoy myself!’

Top tips for anyone with a fear of flying

‘If you’re travelling with people, make sure they understand how you’re feeling before you fly so that you don’t have to explain it to them at the airport or mid-flight,’ recommends Hannah.

‘Let them know how they should respond if you start crying and panicking.

‘For me, I wanted to be left alone, and I didn’t want to speak to anyone or be reassured by well-meaning people.

‘Others may want to be distracted or hold hands with someone. Everyone is different, so let people know beforehand what helps you most.’

Hannah suggests booking your tickets early, so you’re able to choose your seats.

She explains: ‘Most people with a fear of flying have a particular place on the plane that they feel a little bit better (away from the wings, near an emergency exit, near the front, on the aisle or window seat).’

‘When you board the plane, let the cabin crew (and even the pilots) know how you feel about flying. I found this really useful, as they would take extra care of me during the flight,’ Hannah says.

‘Sometimes they would come and explain what was happening if there was a change in turbulence, noise or altitude.’

Hannah suggests ‘learning how to breathe.’

She says: ‘This might sound overly simple but using some calming breathing techniques (and practising before your flight) can really help calm your mind and your thoughts on the flight.

‘The Calm app has a wonderful ‘breathing bubble’ that you can use to bring your breathing back under control if you are feeling panicky.’

Hannah also suggests a relaxation technique called ‘54321’. This is where you become more mindful of your surroundings on the plane.

It’s true that confronting the thing you’re afraid of can help. Some experts suggesting watching videos of planes taking off, or even going to an airport and doing the same thing.

There are even courses available specifically designed for people who are scared of flying. They also take you on a short flight and get you used to the process.

And, if you have the budget, you could even try taking flying lessons to get you used to be up in the air.