Inside one of the best hotel rooms in Scotland: The penthouse at luxurious Fonab Castle has an extraordinarily large £10,000 Victorian bed – and priceless views

I’m staying in one of the greatest hotel suites in Scotland – and discovering there are actually hardships well-heeled guests must endure here.

There’s the slog from the loo to the rain shower, which is in an alcove at the far end of a dressing room on the opposite side of the vast space.

Decisions must be made about which window seat to occupy – the small padded one for views north across Loch Faskally or the semi-circular banquette by a trio of windows that afford views of the magnificent 2,759ft-tall Ben Vrackie mountain.

Dreamy: The Castle Penthouse (pictured) at Fonab Castle Hotel & Spa features a seven-foot ‘And So To Bed’ Dickens Nickel Bed worth £10,000 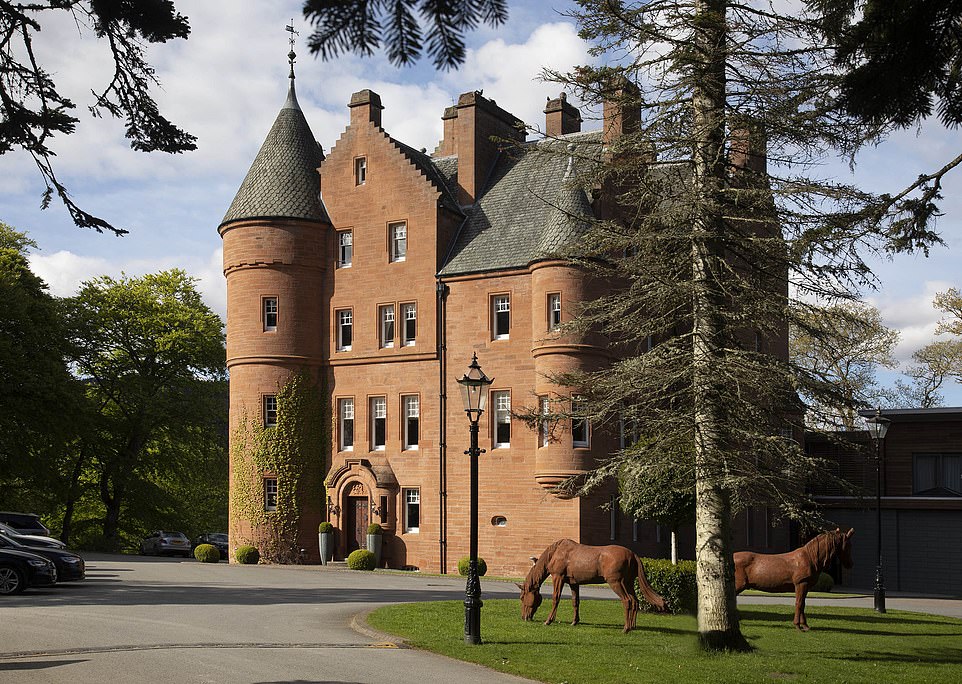 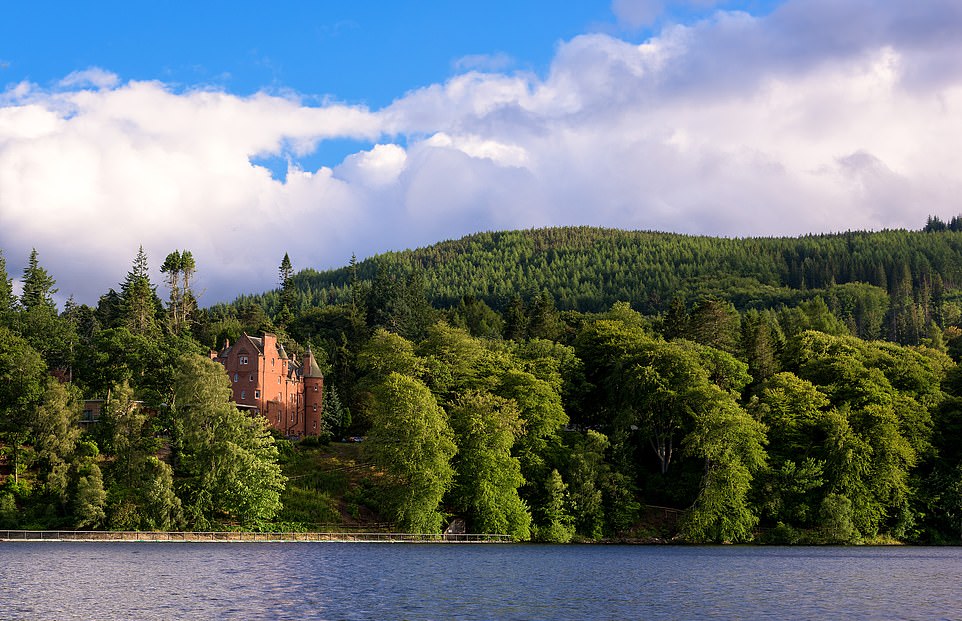 Fonab, which has just had a £2.5million refurb, is certainly historical, but it has a polished swagger, writes Ted

THE JOYS OF THE TRAIN JOURNEY TO SCOTLAND

The most thrilling way of reaching Scotland from England is undoubtedly by train.

Our journey to Fonab Castle Hotel begins with the 9am LNER Azuma from Kings Cross to Edinburgh. 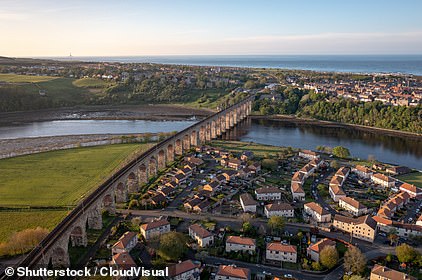 The Royal Border Bridge at Berwick-upon-Tweed

On the way we take in some incredible sights from our seats – the impressive York station, the magnificent Durham Cathedral and the striking Angel of North, just before Newcastle. The arrival into the station there is breathtaking, with amazing views of the city and the River Tyne as the train crosses the mighty King Edward VII Bridge. 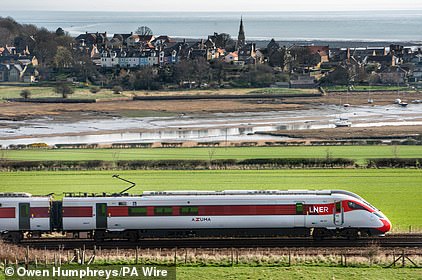 As the train hurtles further north, we gaze at the coast at Alnmouth, spot Lindisfarne Castle on Holy Island and are then hypnotised as the train crosses the Royal Border Bridge (which is actually three miles south of the border) before pulling up in Berwick-upon-Tweed station. After this, amazing views of rugged coastline keep us transfixed before the train arrives at Edinburgh Waverley. Six minutes early. 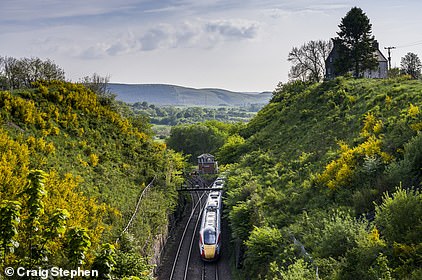 An LNER Azuma train at Hilton Junction, south of Perth, as the line enters the Moncrieffe Tunnel. Measuring 1,220 yards, it is the longest railway tunnel in northern Scotland

We reach Perth via a ScotRail HST service via the showstopping Forth Bridge. Unforgettable. On the way home, we catch a direct LNER Azuma service from Perth to Kings Cross, which doesn’t go along the Forth Bridge, but does skirt past the awe-inspiring Stirling Castle.

And then there’s the toil of bedtime. Plush drapes need to be pulled down over each of the aforementioned windows and an attempt made on the summit of the seven-foot ‘And So To Bed’ Dickens Nickel Bed.

It’s outrageously huge – and vertiginous. Vast enough to accommodate two Hagrids and tall enough to warrant a small run-up and jump to get on top.

Our ravishing chamber is the Castle Penthouse, a mini kingdom with a vaulted ceiling at the top of the imperious red-sandstone 19th-century Baronial-style Fonab Castle Hotel & Spa in Pitlochry, Perthshire. And I really am quite taken with it, despite the hard work involved.

The bed, worth around £10,000, is as comfortable as it is gargantuan, relaxing in the standalone oval bathtub (in a turret with the loo) a wonderful indulgence and those views… mesmerising, whatever the weather.

Fine views, it turns out, are there for the taking from multiple locations at this most beguiling property, including the Lounge Bar and the Fonab Brasserie, which both have floor-to-ceiling windows through which guests can drink in a fine slice of Scottish geology.

The former is a drinks-only establishment, the latter where breakfast, lunch and dinner are distributed, with the quality consistently impressive.

At breakfast we enjoy top-notch porridge, with sugar and cream for it served in mini saucepans, to the particular delight of my three-year-old daughter. We also love the elegant afternoon-tea-style cake stands populated by fruit, pastries, and pots of yoghurt and berries.

For lunch and dinner we try pan-roasted hake with squid-ink risotto (£25); plaice with mussels, cider and chervil sauce (£25), and the Fonab burger (£17.95). Top marks all around. The meat for the burger is excellent, the risotto bursting with flavour and my plaice beautifully presented.

At the hotel’s three-AA-rosette restaurant, Sandemans, the cuisine demands a new set of superlatives.

Cocooned in a bewitchingly boutique-y dining room we work our way through a tasting menu of exquisite dishes and amuse-bouche, with superb wines to match.

What’s on offer is an experience easily worthy of a Michelin star – a mini culinary odyssey of cleverly combined flavours, temperatures and textures.

Then it’s on to breast of Peking duck, an ingenious dessert containing strawberry mousse fashioned into a bright red strawberry and another consisting of heavenly dark chocolate with caramelised popcorn for a bit of crunch.

Wine-wise our palettes are treated to a Burgundian Volnay Pinot Noir, a velvety Chateau Beau-Site red Bordeaux and a sweet Sybille Kuntz Riesling.

The wine list actually spans both Sandemans and the Brasserie and in the latter I’d already quaffed a delightful ‘Saskia’ Chenin Blanc/Viognier and a knock-out ‘Polish Hill’ Riesling from Australia.

The service purrs in Sandemans and is courteous and spritely in the Brasserie. It isn’t always perfect, with a 20-minute wait for a breakfast food order one morning, but it’s a dropping of the ball. Apologies are issued and faultless waiter and waitressing resumes thereafter.

Outside the food and beverage realm, the staff are also rather smashing.

For instance, one of the maintenance men spontaneously takes time out of his schedule to show my daughter how to feed the hotel chickens, which roam the grounds and supply the eggs for the chefs.

And we meet the affable spa staff when we go for a splash about in the enticingly-tiled 15-metre indoor pool.

So, is this the Scottish castle-hotel of your dreams?

Not if you’re dreaming of a rustic, step-back-in-time experience.

Fonab, which has just had a £2.5million refurb, is certainly historical, but it has a polished swagger – like some of its guests. And their cars.

A group of Lamborghini-owning friends are using the hotel as their touring base during our stay, so we rise in the morning to the sound of cockerels crowing and V12 engines roaring. 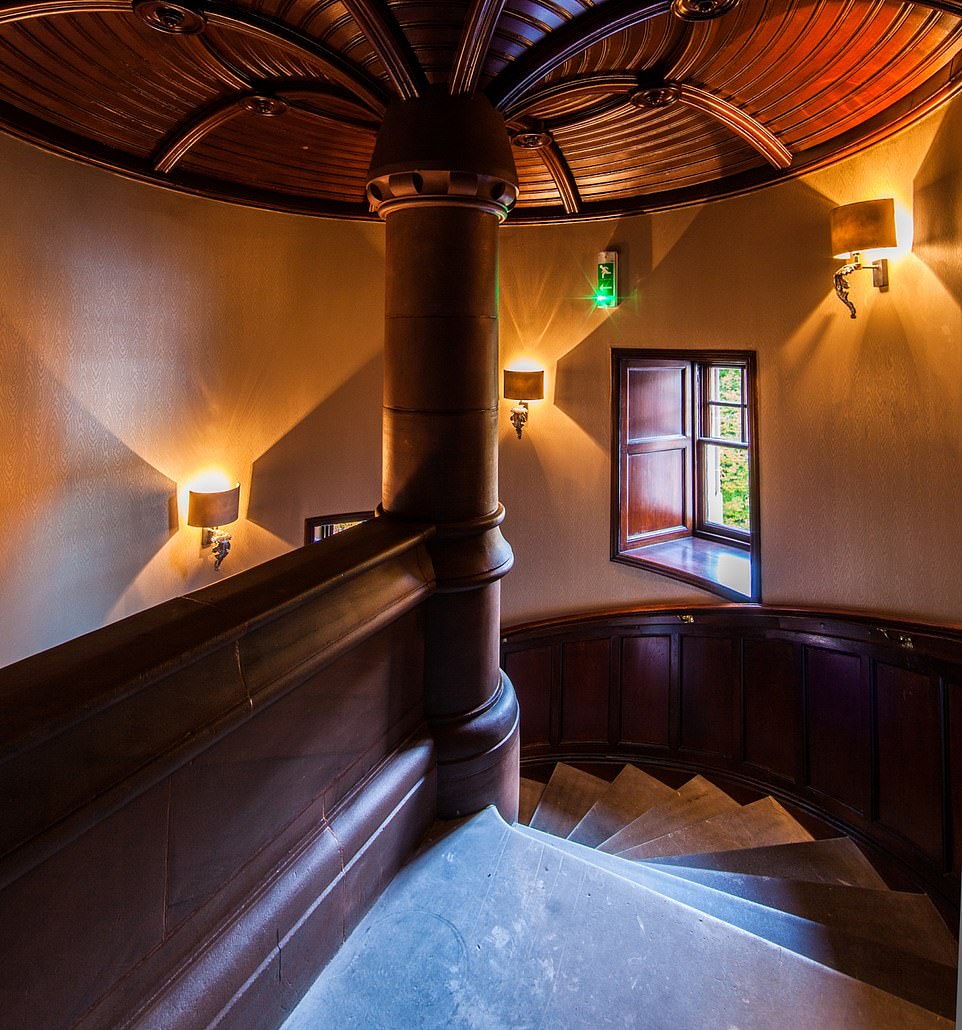 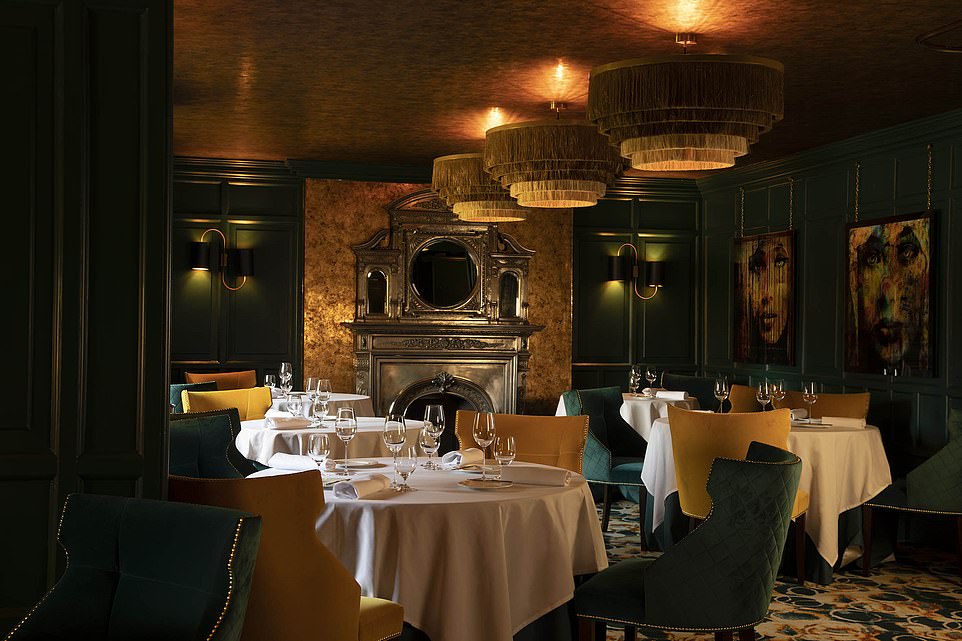 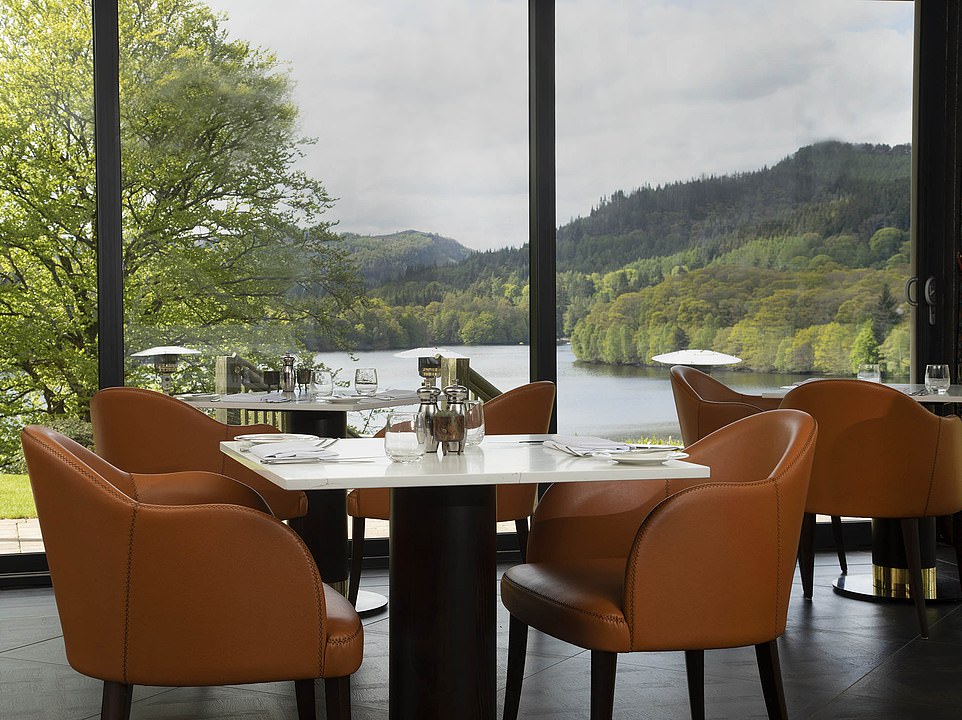 Fine views are there for the taking from multiple locations, including the Fonab Brasserie (above, with Loch Faskally beyond) 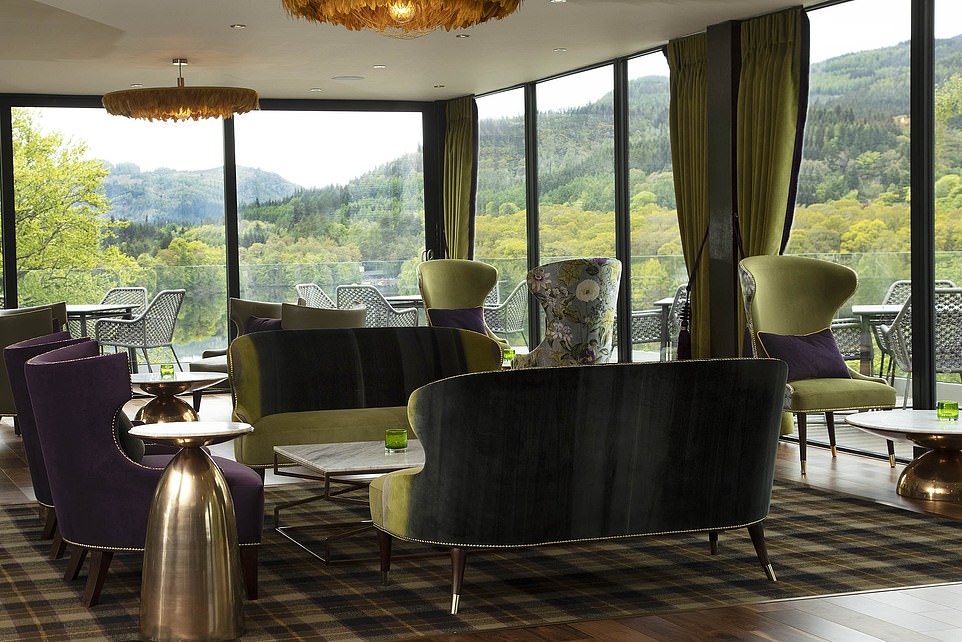 The Lounge Bar, pictured, is perfect for drinking in the scenery with a dram or two

I’m not surprised they’re drawn to Fonab, given that it’s positioned just to the south of the Cairngorms National Park amid, as we discover, some of the very best driving roads anywhere in Britain.

We arrive in Scotland from London via a thrilling high-speed LNER train ride from Kings Cross to Edinburgh, then a ScotRail service across the mighty Forth Bridge to Perth, where we pick up a very cool Mercedes AMG C200 hire car.

We cruise from the castle up the A9, snaking between dramatic peaks to Aviemore, where we turn right and head a few miles along the road to Loch Morlich and the Cairngorm Reindeer Centre, which manages Britain’s only wild herd of reindeer. 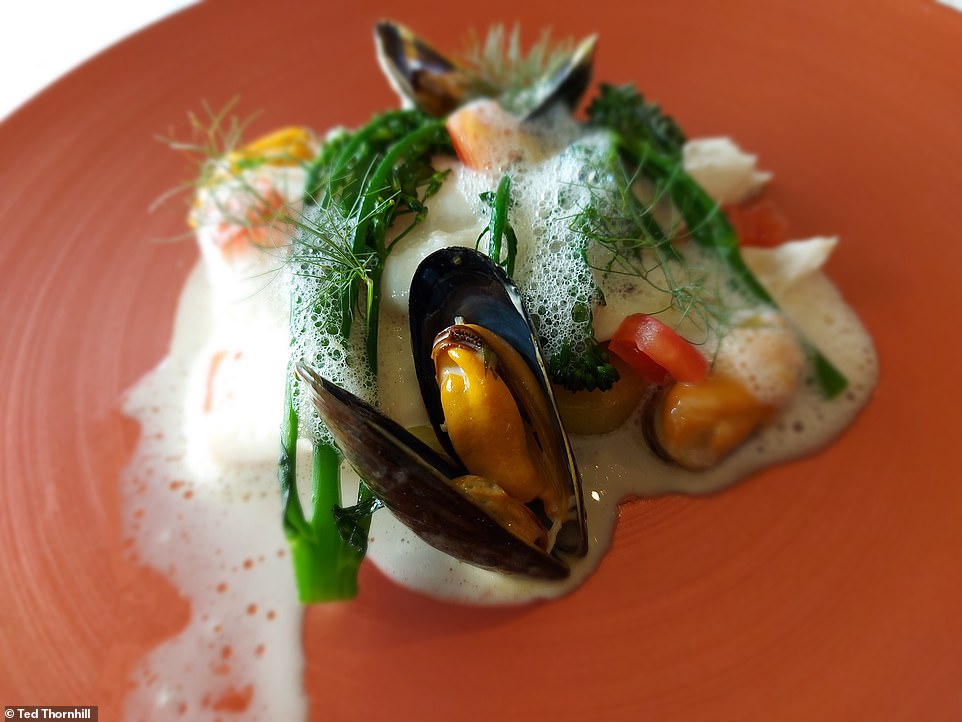 Ted’s plaice with mussels, cider and chervil sauce, which he enjoys at the Fonab Brasserie 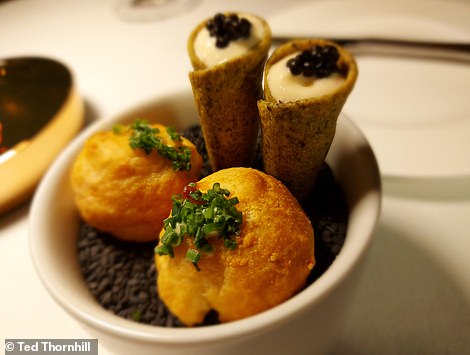 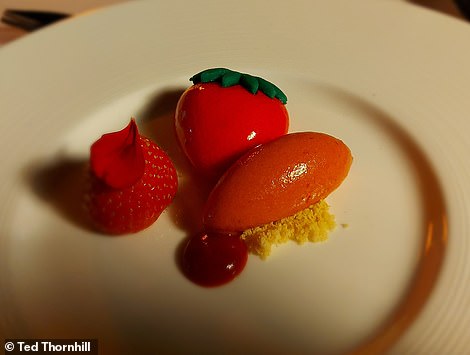 Pictured left is an amuse-bouche served at Sandemans of seaweed cones filled with salmon mousse and caviar accompanied by Parmesan Gougere. Pictured right is the eatery’s exquisite strawberry dessert 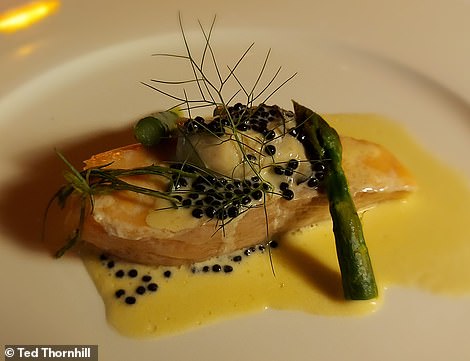 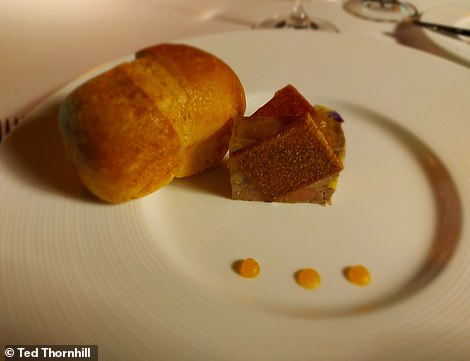 The image on the left shows Ted’s Sandemans confit salmon with oyster and Oscietra caviar. On the right, duck foie gras with Riesling jelly

They were introduced to the sub-Arctic Cairngorm mountains in 1952 by Swedish reindeer herder Mikel Utsi.

There are now 150 of the Christmassy beasts living freely on the slopes above Loch Morlich.

We join a guided tour and hang out with a group of them for half an hour as one of the Centre’s experts fills us in on the reindeer way of life and how they are cunningly adapted to cold weather (they’re so well insulated that if they lay down on snow, it won’t melt).

I also take the C200 over from Fonab to Braemar, a journey that ranks as the most spectacular drive of my life. 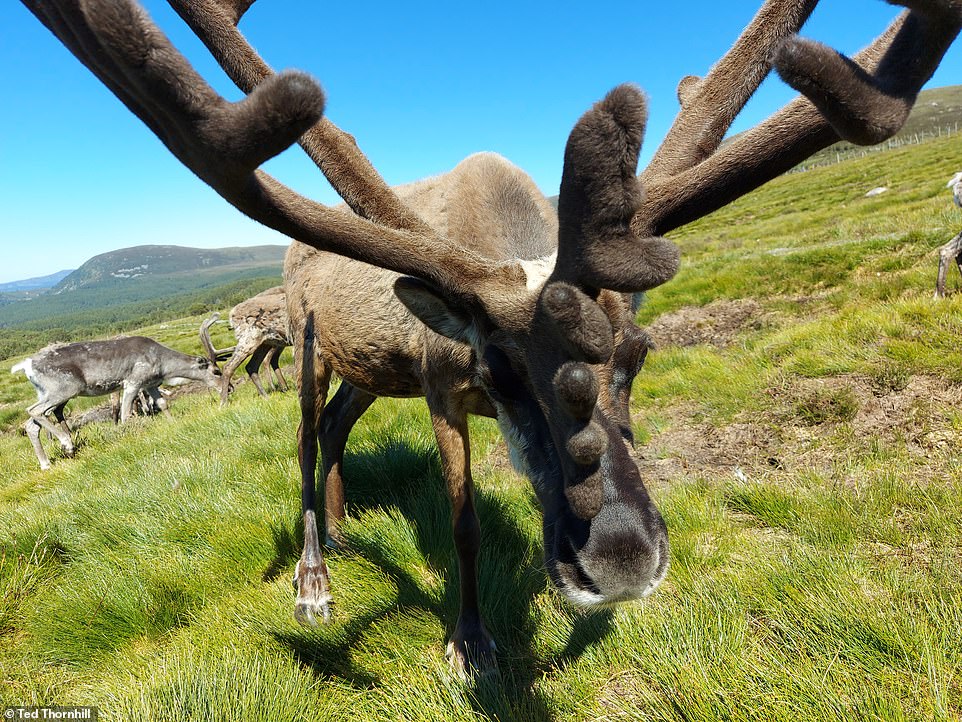 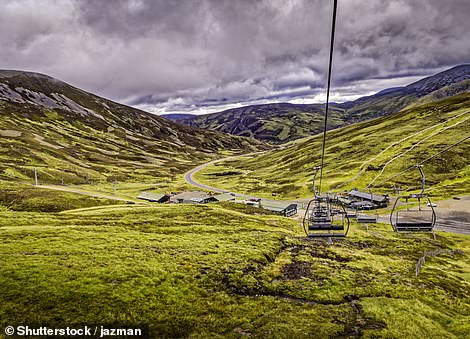 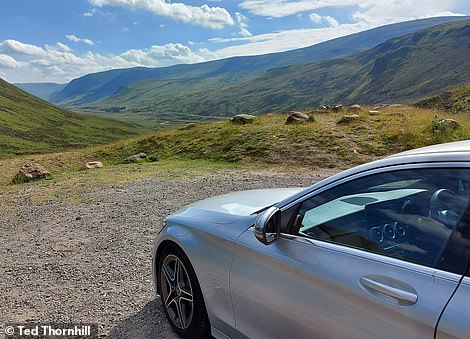 Ted takes his Mercedes AMG C200 hire car along the A93 through glorious Glenshee and past the ski station. He ranks the journey as the most spectacular drive of his life. The image on the left shows the road on the north side of the ski centre and the image on the right shows Ted’s hire car and the Glenshee valley on the south side 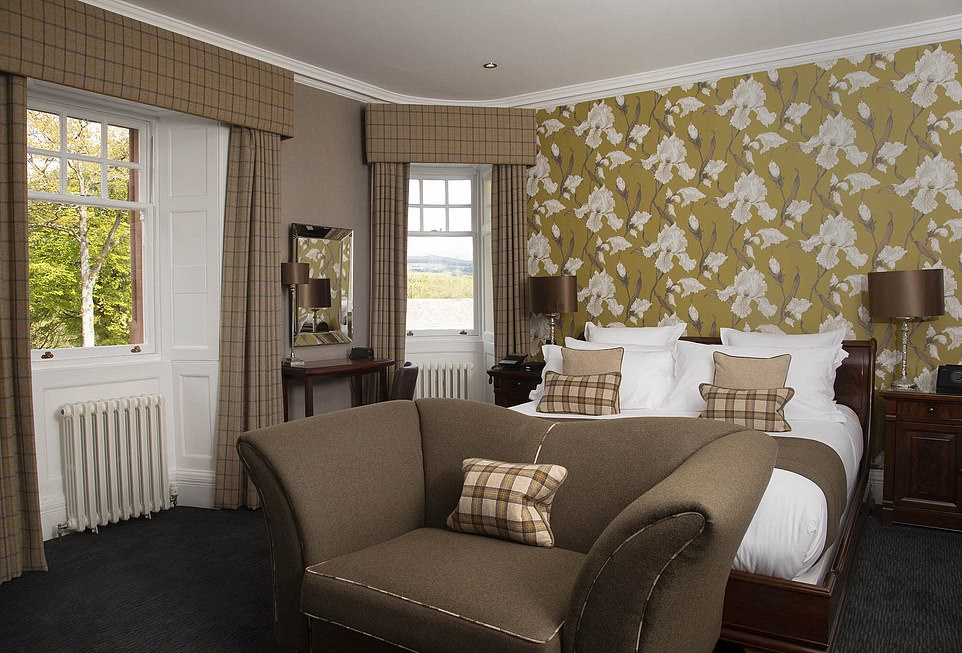 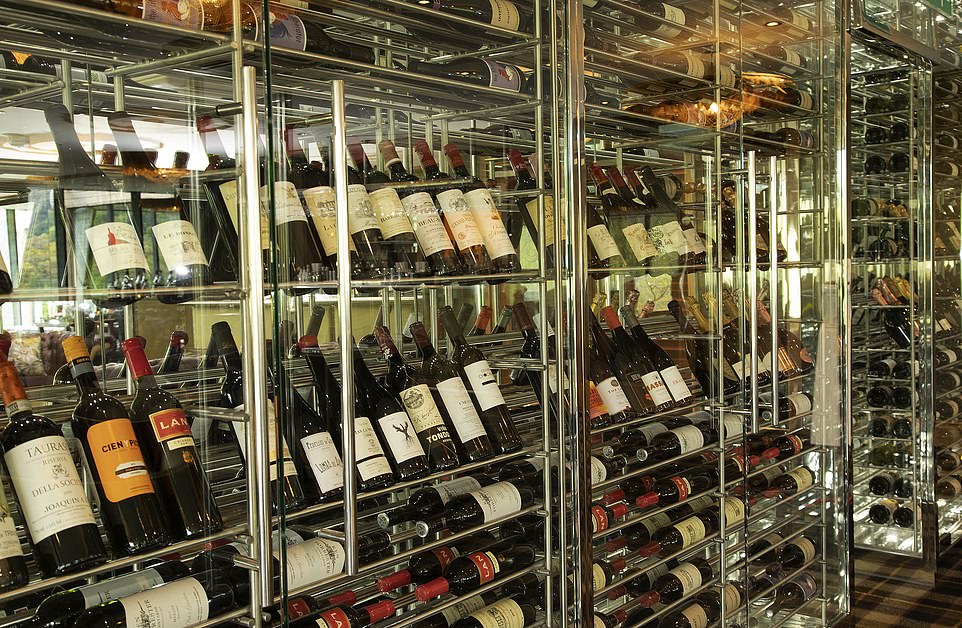 The scenery is glorious for the duration but becomes mind-blowingly epic at Glenshee on the A93. I actually struggle to contain my excitement as I power up the 12-per-cent-gradient climb to the Glenshee ski station, the imperious mountains on either side making me feel totally insignificant.

Back at the hotel there is yet another summit to conquer – the bed.

It’s a hard life… and I can’t wait to tough it out again.

LNER runs half-hourly departures between London King’s Cross and Edinburgh, in both directions, during the day. The journey from city to city takes just over four hours. When booked direct online at lner.co.uk, advance fares start from £54 return in Standard and £136 return in first class. A family return ticket costs £169 for up to two adults and four children to travel (all subject to availability).

LNER also runs one direct service a day between London and Inverness via Perth.

Booking.com offers car rental from over 160 countries in the world, with 60,000 pickup locations in the UK. For more information, visit www.booking.com.

For more on things to do in Scotland visit www.visitscotland.com.